Previously, on MinerBumping... As part of our wonderful guide for new EVE players, the term "Codebox" was coined. Hurrah!

So far, we've talked about some serious obstacles that new players face, and how they can be overcome. As a new player, most of your problems can be dealt with by reading MinerBumping and the Code. Others will require you to disable your safety or praise James 315 in chat channels. And, of course, you can save yourself much heartache by ignoring the advice of carebears and instead trusting in the Agents of the New Order.

The final opponent who stands in your way--the most formidable of all--is you, dear reader. The threat posed by the "rebels" you encounter is trivial; they fail non-stop daily all the time. But to gain mastery of EVE Online, you must conquer yourself.

Fortunately, this metaphysical task isn't that difficult if you get a little help from the Saviour of Highsec. You're in luck, because I'm always happy to help.

Lesson #14. Your first "agent mission" is to collect 10 million isk and give it to an Agent of the New Order.

Like most MMORPGs, EVE is designed to distract you and tie you up in layers of meaningless activities that suggest progression but actually go nowhere. As soon as you set foot in the EVE galaxy, the game attempts to nudge you into a pattern of completing "missions". Even if you complete these so-called missions, it's an empty victory. No one--not even you--will ever remember whether you were the millionth person to complete some NPC mission. Who cares?

Achieving greatness in EVE requires you to resist, to reject the paths laid out by the game. The tutorial and all of the missions that follow are aimed at getting you into a pattern of obeying the commands of NPCs. If you submit to the NPCs, you will one day be no better than an NPC yourself. You will become a bot-aspirant. The Code has always been about putting humanity first, in its rightful position of superiority above the bots. Bot-aspirant carebears do precisely the opposite. They're traitors. We shoot traitors in highsec.

The love of isk is the primary tool of the forces of bot-aspirancy. Even the most pitiable carebear would not be motivated by canned "congratulations" messages from an NPC when a mission is completed. It's all about the isk. NPCs reward new players with small amounts of it, in the hopes of getting the newbie hooked. Once a new player is consumed by greed for isk, even the NPC mission is no longer necessary; the newbie can grind isk by mining in an asteroid belt without NPCs to goad him on.

Once we become aware of these facts, basic logic does the rest. For a new player to be destined for greatness instead of bot-aspirant greed, he must declare independence from isk. He must commit an affirmative act of defiance against it. The Code gives us the specifics: Give 10 million isk to an Agent of the New Order. 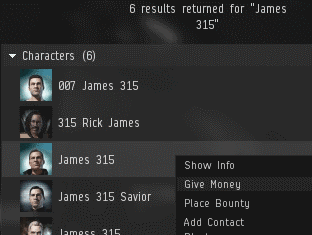 This simple, seemingly trivial act is incredibly potent, especially for brand-new players. The amount of money is small--just barely enough to be noticeable by its absence. The new player knows that when he gives the isk to an Agent, he's not going to see it again. It won't be sitting in his wallet. He won't be able to admire the 10 million and say, "This is my intoxicating reward for completing all of those NPC missions, or shooting those rats, or mining all of that Veldspar."

No, our Gallant newbie has chosen to give the money away. He says to himself, "I don't care about isk. I'm not beholden to it, nor am I tempted by its charms. I do not play EVE so I can hoard isk for its own sake. I serve something of an infinitely higher value: the Code."

The carebear who has lived his entire EVE career clinging to isk and crying over blown-up bling can never understand the transformation I have just described. Yet you can see its potential, because the bot-aspirant finds the idea of paying 10 million isk to an Agent unthinkable. It would require a transformation. Choosing the Code over isk, even in the smallest way, is radical. It's the stuff of revolutions.

Having described the evils of the in-game mission system and the dangers of grinding isk, how is a new player supposed to acquire 10 million isk? Any way he chooses. He can scam for it, he can beg in Jita for it. He can go to lowsec and try to ninja-mine it. What matters is that he proves himself capable of handing it over to a proper highsec authority. That's a mission he can take pride in completing.

We've come a long way, haven't we? From someone who was merely contemplating joining EVE for the first time, to someone who has successfully triumphed where so many others have failed. Once you've purchased a permit, you can consider yourself to have graduated to the next level. You're no longer a newbie; you're a mature young man or woman. The huddled masses of highsec yearn for your leadership!

MinerBumping has many resources for the young Agent. You can find some useful links on the Become an Agent page or the Gank page. Seasoned Agents will be happy to give you further advice and instruction when they feel like it.

Onward to glory!
Posted by MinerBumping at 18:02