Over One Trillion Seven Hundred Thirty-Eight Billion in Shares Sold 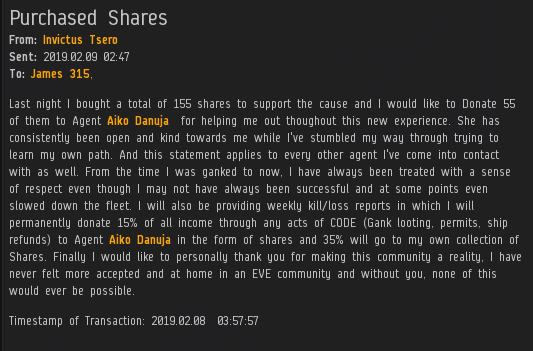 The New Order of Highsec continues to be EVE's #1 organization when it comes to love, friendship, and generosity. And buying New Order shares for yourself and others is a fine expression of those things. 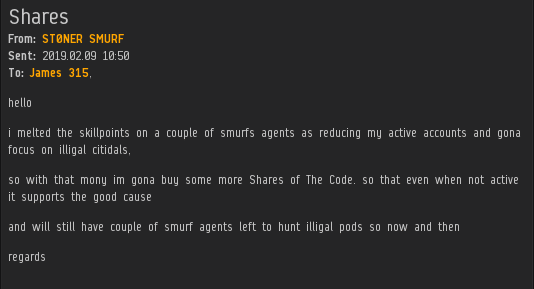 The icing on the cake: A Vigintuple Supreme Protector's Tip of the Hat™. Those are very powerful. (If you doubt, purchase 20,000 shares and see for yourself.)

From a business standpoint, ST0NER's purchase was a huge power play. He leapfrogged numerous distinguished shareholders and became the 9th biggest shareholder of all time.

Meanwhile, Benson en Efnyssen made an understated, dignified purchase of 250 shares. This was good timing, allowing us to pass 1,738 billion isk mark--and earning Benson a Supreme Protector's Tip of the Hat™. 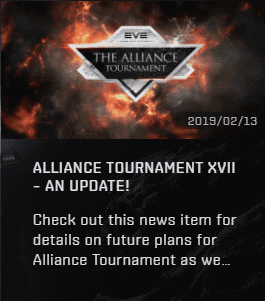 The significance of this should be obvious: The mighty CODE. alliance remains undefeated!

Of course, as the reigning AT champs, we get a lot of tomatoes thrown our way by lesser PvP'ers. "But James 315," they say. "Wasn't CODE. permabanned from the AT in 2014?" Although CCP Gargant did make such a declaration, we must remember that it was a mistake on his part--done in the heat of the moment--and in any event he left CCP in 2015. It's doubtful that anyone still working at CCP today would uphold such a clearly erroneous ban. If the AT was still a thing, that is.

Actually, CCP Falcon claims that the Alliance Tournament will come back--eventually. Kind of like how eventually someone will rise up and destroy CODE.?

Don't hold your breath! For now, highsec remains the one true arena of elite PvP.
Posted by MinerBumping at 18:03