Previously, on MinerBumping... Agents of the New Order taught Aeryn Hanaya of dontcare Corporation how to care about the Code. It took three ganks and 1.5 billion isk worth of losses, but the miner finally began paying attention to what was important in EVE.

Though Aeryn was thinking about the Code, she did not yet have the capacity to think about the Code correctly. Instead, she made a spectacle of herself in the MinerBumping channel.

The miner tried on a new excuse for her bot-aspirancy: She'd retired from PvP and was only interested in AFK PvE now. This would be like someone sitting in a corner during a Call of Duty match because they'd already logged too many hours in combat.

Regardless of her allegedly storied past as an elite PvP'er, Aeryn had no right to violate the Code.


Aeryn Hanaya > and Larsulrik Napsterbane wants 3x the price so ... nop :)
Karma Bad > Aeryn Hanaya it is true, you need to have a official permit on record, and also recorded in your bio
Aeryn Hanaya > better to pay plex to CCP

If enough miners had Aeryn's attitude, the New Order could become CCP and Pearl Abyss's favorite organization! The mighty CODE. alliance might just get a Community Spotlight yet.


Aeryn Hanaya > i can tell you about some bots in my okd system
Aeryn Hanaya > 1 with 17 acc mining ice all day and night and 1 with 13 mining all the asteroid belts
Aaaarrgg > Relentless Excavation are they members of this corp
Aeryn Hanaya > nop they are inactive
Aaaarrgg > so not really relentless, more zzzzzz

Next, Aeryn pulled out a common carebear tactic: She attempted to deflect attention toward some other Code violators.

Why, you might ask, do people report bots to CODE. instead of CCP? Because deep down, they know we're the ones who fight for the good of highsec.


Aeryn Hanaya > my previuos corp was all over pvp
Aeryn Hanaya > nothing else
AMARR DontCare > i wonder what they will do if all miners stop mining and no ships are build and no miners to gank. They will most likely turn on themselfs and kill each other till only pods are left and play pod bumper cars lol
Aaaarrgg > nope we will play eve and mine and fight over resources aas it was designed but not afk

Aeryn's CEO, AMARR DontCare, tried out another carebear canard: "Without miners, you'd have no ships!" Our Agents can shoot down that myth faster than an anti-tanked Bestower.

It's fascinating to see how much the ordinary players rely on CODE. to deal with the botter problem these days. So much for CODE. being "bullies", "griefers", and "torturers".

As time went on, more Agents were drawn to--or returned to--the conversation. It was getting difficult to stay up-to-date on all of Aeryn's losses.


Aaaarrgg > https://zkillboard.com/character/95459942/ oh damm didnt realise :)
Aeryn Hanaya > as i see you re a gang of ************ ppls :) nice
Aeryn Hanaya > you dont respect your CODE
Larsulrik Napsterbane > Lewak there were something like 3 battleships and a battlecruiser guarding him. Major Antiganking fail....

Disgusted by the obvious lack of reimbursement isk headed her way, Aeryn and her CEO left the channel in a huff.


Lothar Mandrake > This local chat message I received last week was so good, I slapped it in my Bio. LMAO! "- Oh no, why do you support CODE.? - Because no one else comes running when I find BOTS that need to die. Until you are willing to jump in a Catalyst and lose your security rating cleaning up High Sec, STFU!"

Nevertheless, it was clear that Aeryn and AMARR were aware of their guilt. If they wanted to help deal with the bot problem, they could start by clearing the bots and bot-aspirants out of their own corporation. 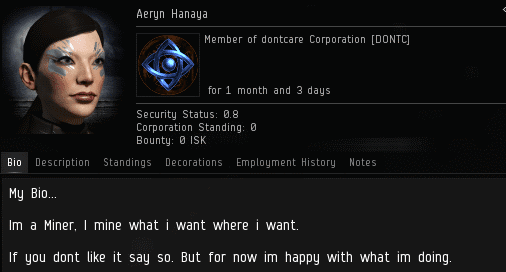 Aeryn chose to remove the mining permit from her bio rather than risk punishment for displaying an invalid permit. She claimed to be a happy miner. But as we all know, there is no long-term happiness in highsec without the Code.
Posted by MinerBumping at 18:04