Previously, on MinerBumping... AMARR DontCare went to the MinerBumping channel to demand an explanation for why Aeryn Hanaya lost her Hulk to a group of New Order Agents. Even as our Agents were explaining Aeryn's Code violations, the miner lost a second Hulk. Then she, too, joined the channel.


AMARR DontCare > at least its only a bit of isk lost. making it up in the next hour or so
Slutzilla > ships already been replaced.... i know.
Aeryn Hanaya > ofc it is i need to have fun with it
SWAGGZENEGGER > its not Sylvite mining season
Aeryn Hanaya > i mine watever i find
Aeryn Hanaya > i like veldspare

Though Aeryn started off ranting about Agents "violating their own Code", the miner was easily distracted.

It soon became clear that there were good reasons why Aeryn managed to lose two Hulks in the course of one day: She and her CEO knew nothing of our Order.


Aeryn Hanaya > ahahhahahahaa
Aeryn Hanaya > check my decorations .. thats is a symbol ^^
Lewak > for your code violating behaviour as well as disrespecting Mark of James your permits has been revoked and price for new permits increased to 30m isk, carebears.
Aeryn Hanaya > yup come to my spot to collect your 30 mil :)
Lewak > some agents already did, twice

As CEO of the dontcare Corporation, it was AMARR DontCare's duty to keep Aeryn in line. He showed little interest. And the full depth of his criminal nature was about to come to light. 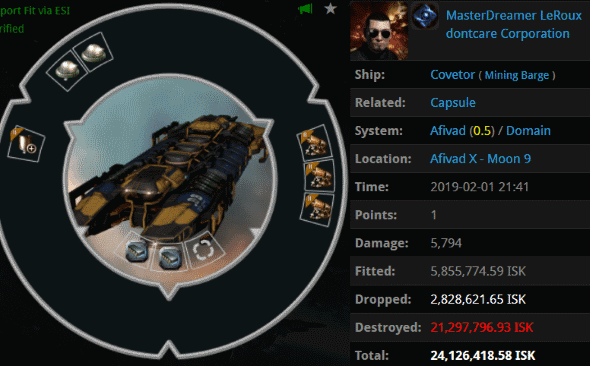 At that very moment, yet another member of dontcare Corporation was ganked by a trio of Catalysts. Before dying to CONCORD, all three Catalysts recorded something else: 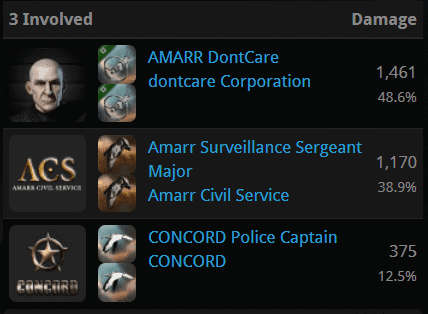 On each Catalyst lossmail, a member of dontcare Corporation was seen attempting to thwart the gank--including AMARR himself. Since CONCORD jammed the Catalysts before they were destroyed--and because the Covetor target was killed--the interlopers had no effect. Yet they were still guilty of obstruction of justice.

Failing to save his corpmate from justice, AMARR tried to play it cool.

...Yet the evidence of guilt was impossible to ignore.

There was no denying it: Aeryn's double Hulk loss was no isolated incident. Something was rotten in dontcare Corporation.

And, as they say, the fish rots from the head.

In Part 1, readers already perceived that this highsec mining corporation was a den of iniquity.

In spite of her losses, Aeryn showed not the least bit of remorse. Nor did she appear concerned for her corpmate's loss.

Aeryn was completely self-absorbed, just like every other bot-aspirant miner in highsec. I doubt it ever occurred to her to praise me--not even when she was losing her Hulks. 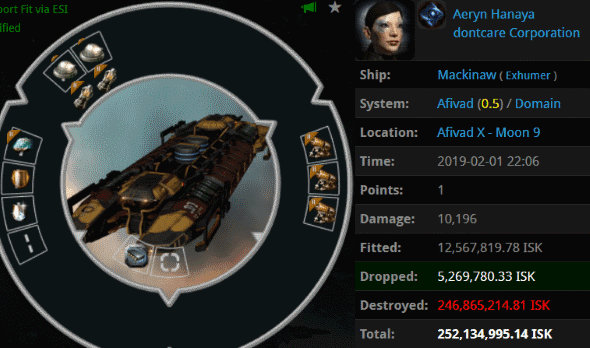 As Aeryn indulged in frivolous talk about her birthday, she lost a Mackinaw, her third exhumer loss in barely an hour and a half. Would her dead Mackinaw finally snap her back into reality?