Previously, on MinerBumping... EVE rejoiced at the creation of a much-needed guide for new players.

Lesson #12. Don't let people stop you from having fun in EVE.

You'd think this lesson would be unnecessary. EVE Online is a game--who would want to stop you from having fun in a game? The answer, actually, is that a lot of people would. It's unfortunate but true. As soon as you jump into the EVE galaxy, you'll be practically besieged by people who seem to want nothing more than to stop you from enjoying the game. My goodness, CCP introduced whole mechanics into the game aimed at that very purpose. 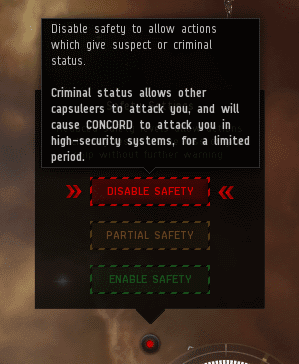 Don't get me started on all of the nerfs to highsec fun that CCP has implemented over the years.

It's not just CCP, though; it's the players. More specifically, it's the carebears. They say they don't enjoy PvP--and they're certainly not skilled at spaceship combat--but those who do the most to ruin other people's EVE experience are carebears. They're miserable (even when AFK, I suspect), and they want you to be miserable, too.

The carebears prey on new players like you. They claim to want to protect you. From whom? The gankers? A ganker might destroy one of your ships. The carebear will destroy your will to play EVE--if you let him. Carebears do this by encouraging new players to engage in the most unpleasant, mind-numbing aspects of the game. They'll tell you it's not so bad, but look to their own actions: They maximize the time they spend AFK and, frankly, many of them use bots so they can avoid engaging in their chosen professions entirely.

The worst are the carebears who organize themselves into PvE-oriented corporations or alliances. "We do a little of everything in this corp," they claim. It's a lie. All they do is grind isk--the more automated/AFK, the better. The paltry isk to be gained from this futile pursuit is their only reward. And they want you to have it even worse, by taxing you and by insisting that you sell them ore at below-market prices. They provide you with nothing in return, all while insisting that they have excellent leadership skills. If the corp/alliance is wardeccable, they'll display those leadership skills: "Everyone stay docked up and the enemy will get bored and go away after a week or two." Then they blame the wardec mechanics for the failure of this strategy. Naturally.

The madness of these carebears can be proven, objectively, with some basic math. It takes 500 units of PLEX to pay for a month's subscription to EVE. Jita is currently selling each unit of PLEX for around 3.85 million isk, so that's a bit less than 2 billion. In American currency, the cost of a month's subscription ranges between $10.95 to $14.95 per month, depending on your pricing plan. So how many hours does it take a Retriever pilot mining Veldspar in highsec to earn eleven bucks? You can see where I'm going with this: Highsec is full of carebears grinding isk at a rate of pennies per hour. Far, far below minimum wage. PvE corps should be outlawed; they kind of already are.

This might be explained away, if the carebears actually enjoyed what they do. But they don't. They avoid the actual act of PvE'ing as much as possible--even to the point of violating the EULA. Everything they do, they do for the isk. Which they spend on... blingier mining ships? Thanks to restrictions on RMT, they can't even say they're doing it for a little extra RL money. So they're doing something they don't enjoy, to accumulate small amounts of something they can't really use. No wonder they're miserable. No wonder they always happen to be in a bad mood when they get ganked.

And, new player, they want you to be just like them.

Lesson #13. Agents of the New Order are agents of mercy.

The rebellious highsec miner, in his cold, dead heart, scoffs: "You're right. People do try to stop you from having fun in this game--the gankers. Your Agents want to tell us what to do. They don't let us enjoy the game how we choose."

Agents play EVE as it was intended. They shoot spaceships in a spaceship-shooting game. Even better, they do it with style--better than anyone else. The highsec carebear is like the fellow who attempts to have "fun" by admiring a landscape in Call of Duty and gets surprised when bullets are volleyed his way. Simply put, the sightseer isn't playing the game correctly.

Likewise, the AFK miner isn't playing EVE correctly, and the death of his Retriever is a natural, desirable outcome. Our Agents teach people how EVE is supposed to be played, and they teach by example. Mercifully, they freely share their wisdom, making it available to all.

If you don't like the Code, go to nullsec. Go live in a wormhole. Why are you surprised when someone enforces the Code in highsec?

"I shouldn't have to obey the Code. Highsec is a sandbox."

No, you poor, deluded carebear. EVE may be a sandbox, but highsec is a Codebox.