There's nothing scarier than an EVE player who's left the game. Time for another edition of the Highsec Miner Grab Bag!

After losing his Venture, Kabajachi sent our Agent a message in Russian. Here's the Google translation:

Feel better? treat your ragged ass, and then angry, you throw at people

Some people say Ventures shouldn't be ganked. However:

...They may not read the Code every day, but these guys know they're guilty.

Who needs critters when you've got the Code on your side? 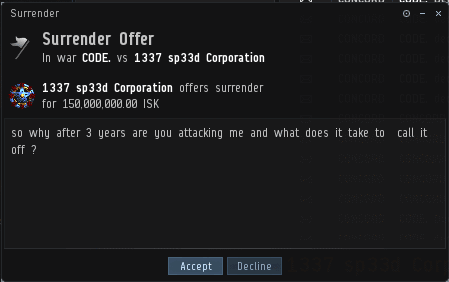 Every so often, I receive a surrender offer from one of the many corps and alliances that get wardecced by the mighty CODE. alliance. After speaking with the Agent responsible for this particular wardec, I was authorized to take the carebear's money--if he had any.

...Never trust a carebear, especially when it comes to isk.

Highsec miners whine, "If you want PvP, got to lowsec." Agent Magalaus Shardani nicely turned it around on some lowseccers who didn't belong in highsec. I won't comment on Fixy FixIT's response, but it was dumb.

If Michael Grims had a tanked Skiff or Procurer, why wasn't he using it?

...Oh, he was saving his tanked ships for a special occasion. 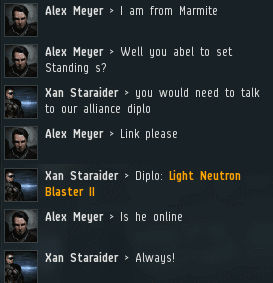 Diplomacy is important to CODE. That's why we only use tech II diplomats. 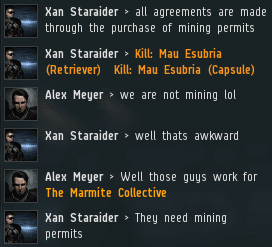 You can tell a conflict has been satisfactorily resolved when a mining ship explodes.

That's a question I don't normally get asked. Everyone knows my name. The bad people tremble at it.

A lot's changed in EVE in the last 10 years. And all the stuff that's changed for the better is because of us.
Posted by MinerBumping at 18:02