As a new player, you should expect to spend the majority of your EVE-related time reading MinerBumping and rereading the Code. However, at some point, you will want to begin interacting with the EVE galaxy via the EVE Online client.

Lesson #7. Seriously consider whether you really want to play EVE.

Before you create an EVE account, take a day or two to reflect on the question of whether you want to become an EVE player or not. The time you have spent with MinerBumping thus far will inform your decision. Have your reactions when reading about the New Order and its Code been positive? Does the thought of enforcing the Code fill you with enthusiasm? If so, you're made of the "right stuff".

If, however, you find that the adventures of our Agents make you recoil in horror, that's a red flag. Do you identify with the carebears and Anti-Gankers and the racist, profanity-laden death threats they spew after they lose their ships? Another red flag.

Each day, our Agents act with almost supernatural skill and finesse to clean up highsec and make the world a better place. They are the defenders of civilization. If you suspect that you may be a bot-aspirant, do us all a favor and don't sign up for EVE. That's the only way a Goofus can help save highsec. Consider it a redeeming act. And you needn't worry about CCP and its business goals: Technically, they haven't lost a subscription if you never signed up in the first place.

You can just select random stuff.

Now that you're in EVE, let's talk game mechanics. 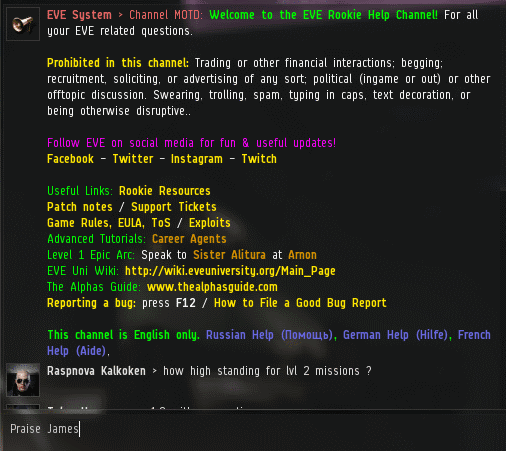 The little windows that you see are places where you can praise me or send other messages to your fellow EVE players. You know, you have a lot of advantages compared to a newborn baby. Whereas babies cry when they're born, a new EVE player can introduce himself to the world by making a constructive, meaningful statement. "Praise James" is that statement.

You can type it anywhere: Local channels, NPC corp channels, new player channels, help channels. If someone sends you an invitation to join a private convo, you can type it there. Praising me in chat channels doesn't cost you any isk, it doesn't require skills to be trained, and you don't need to learn any game mechanics to pull it off successfully each time. Shout it from the rooftops!

Saying the name James 315 elicits a useful reaction anywhere you go in highsec. It's EVE's most powerful filtering mechanism. A hundred thousand people play this game. How can you tell the good from the bad? Child's play.

Lesson #10. You're better than the ordinary players.

When you begin EVE, you have virtually no isk. You have no assets. You have no skills trained, other than the basic skills allotted to all newly minted characters. Your only ship is a "rookie" ship barely capable of doing anything. You probably have no idea how to navigate the game, and the wretched UI isn't doing you any favors. And yet...

And yet you're already a better EVE player than everyone you meet who doesn't have the Code.

Though our Agents are constantly improving the state of highsec, the place is still filled with a rabble of players who don't "get" EVE. Some of them may have a pile of isk and a few shiny ships, but they have absolutely no idea what they're doing. Lacking a mining permit, they're probably about to lose all the stuff they collected since the last time they got ganked.

It's no secret; you already saw it when you spoke the words "Praise James" in a busy channel. Link the Code, too. The surge of power is unmistakable. You are instantly the commander of the scene. The rabble are compelled to react. The bad people scowl, they squeal, they squirm and shift uncomfortably in their seats. Whatever they had planned for the day comes to a grinding halt as they devote their full but limited intellectual resources into combating your revolutionary act. Or they are chastened--stunned into silence.

Now you have taken on the power and responsibility of being one of EVE's superior players. You have experienced what it means to be elite. You have become an Agent. You will always win.

And you don't even have your first Catalyst yet. 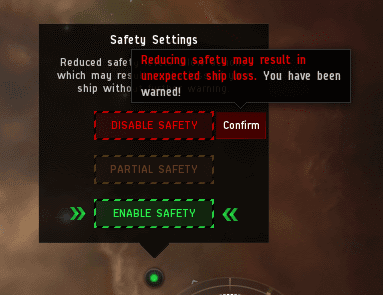