Previously, on MinerBumping... blood valentine of the Flower Revage Cartel began uttering mysterious threats against the New Order. He claimed that on March 1st, a terrible fate would befall anyone pledging loyalty to the New Order. When I paid a visit to Brapelille, valentine initiated a private convo.

Introductions were made. Well, my introduction was made. I didn't ask who he was. 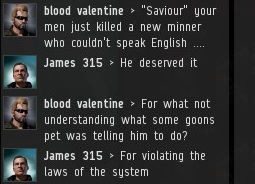 valentine spoke on behalf of a miner who had some excuse for not following the Code. But the decision to destroy the miner's ship was not overturned.

With the pleasantries out of the way, it was time to get down to business. At long last, we would discover the identity of the mastermind behind Flower Revage Cartel and the mysterious March 1st deadline.

Disappointingly, it was the old "anonymous employer" gambit. In all of EVE's history, I doubt more than 1% of supposed "mercenary contracts" involved an employer who actually existed. 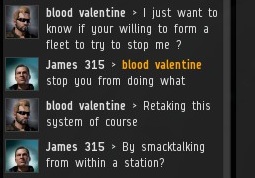 valentine urged me to fly into action to stop him. But it wasn't clear exactly what I was supposed to be stopping. Our enemy's "occupy the ice field" movement struggled to exert any leverage. The New Order acted according to its own wishes, as usual. 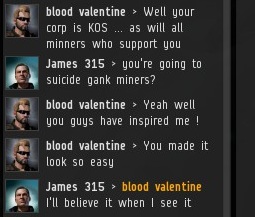 Many have promised to suicide gank the permit-holders, but none have attempted it so far. Will valentine be the first? 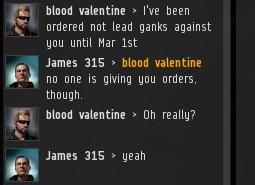 Unfortunately, we would need to wait until March 1st to find out. 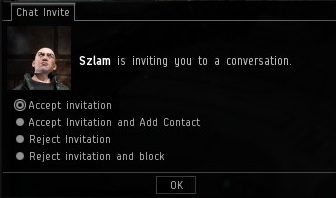 Out of nowhere, I was convoed by Szlam, the founder of Flower Revage Cartel. Would answers be forthcoming at long last? 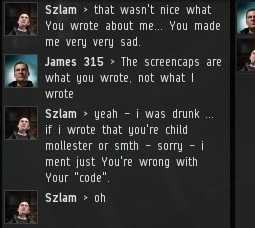 In fact, Szlam wanted to talk about another matter. As with others who complained about their appearances in MinerBumping, Szlam was responsible for his own words, which he readily conceded.

Later, Szlam sent me an apology EVEmail. He had decided to step down as the CEO of Flower Revage Cartel and leave the corp. blood valentine became the interim CEO; the remaining two members being left in his capable hands.

valentine's reign as CEO got off to a rocky start when he made a threat against one of our Agents. Some say valentine was given a temporary time-out by CCP, but no one can say for sure. If true, Flower Revage Cartel lost a significant chunk of its firepower at a critical moment in its history. 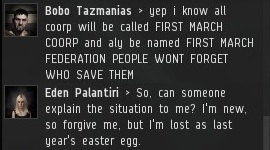 Nevertheless, rumors about something happening on March 1st spread like wildfire among the highsec miners. 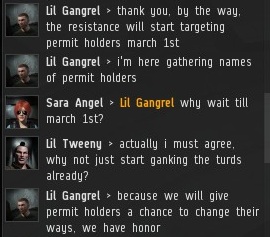 Rebel Lil Gangrel stoked the flames. He hoped to act as an informant to the resistance. 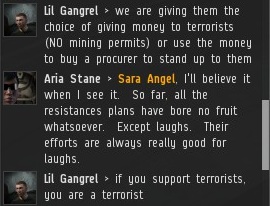 And so here we stand, on the precipice of the March 1st apocalypse. Will the permit-holding miners of highsec be slaughtered? Or will nothing happen? Regardless, I am confident that the Code-compliant miners of highsec will face any challenge with absolute courage and steely resolve, just as the brave Londoners held up against the Blitz so many years ago. After all, if a miner renounces his permit, he'll just get blown up by the Knights of the Order. Stay strong, miners!
Posted by MinerBumping at 20:18