By now, many of you are aware of CCP's recent decision regarding the legality of miner bumping. As EVE's premiere miner bumping blog, MinerBumping takes a special interest in such things. Ever since I began bumping miners out of the Halaima ice field last June, hundreds--likely thousands, by now--of miners have petitioned CCP to ban miner bumping. A lot of miners and space lawyers assumed miner bumping was already against the EULA. Others begged CCP to change the EULA to explicitly prohibit miner bumping. Last November, the "controversy" reached critical mass when CCP Falcon created a thread on EVE-O to request community feedback on the issue.

Though no one can read Falcon's mind, intelligent observers concluded that this request for feedback was the prelude to a ban on miner bumping. If so, the thread was put in the wrong subforum. EVE General Discussion, a carebear stronghold and by far the most active subforum on EVE-O, was not chosen as the location for the feedback. Instead, the thread was posted in Crime & Punishment, where emergent-friendly EVE players frequent.

To shield the larger part of the community from being exposed to miner bumping, threads about the subject were frequently shipped off to the frozen wastes of less-populated subforums. My original thread about my takeover of Halaima, for example, was packed away to the Sell Orders subforum, despite the subforum's rules that only in-game items may be sold in it--and I'm pretty sure mining permits don't qualify. When I drew up a new version of the thread, it was removed to the Intergalactic Summit subforum. But the few residents of Intergalactic Summit were displeased, because it's a roleplaying subforum with its own strict rules. Since my Halaima thread made references to EVE being a video game, it was petitioned by concerned RP'ers. Thus, the thread was moved yet again, to Crime & Punishment. This set the precedent that led to the community feedback thread being placed exactly where it would receive the most pro-bumping feedback possible.

In accordance with the thread's pre-arranged timetable, Falcon locked it in mid-December so the senior GMs could make a final determination on the legality of miner bumping. All miner bumping-related conversation was temporarily declared off-limits for some reason while the GMs conferred on this grave matter. And then, just when it seemed like the day of reckoning would never come, "senior game master" GM Karidor issued the long-awaited announcement in this thread.

The decision? Long story short, miner bumping is alive and well, and here to stay.

There are a few caveats, but they're essentially meaningless because they don't change any of the preexisting rules regarding harassment and/or bumping. Here are the relevant bits:


"CCP considers the act of bumping a normal game mechanic, and does not class the bumping of another player’s ship as an exploit."

This gives us free reign to bump. Now, regarding the possibility of bumping as a tool for harassment, from the OP and an additional reply made by Karidor downthread:


"However, persistent targeting of a player with bumping by following them around after they have made an effort to move on to another location can be classified as harassment, and this will be judged on a case by case basis...

"If you are reported and we find you actively following around a target without a war to continue bumping a specific player, it will still (at some point) considered harassment, even if you divert your 'attention' a little while doing so...

"While it will involve inconvenience, we will have to see that one actively tried evasion before we consider someone being followed around and harassed. Merely changing belts in the same system or moving a few thousand meters to another asteroid would not qualify in this regard. Ideally you would move to other systems and more than just one or two jumps to avoid being found again quickly, requiring some effort to locate you again (i.e. through locator agents)...

"If the victim just moved next door, that could still be interpreted as 'general area of operation', if the miner starts changing regions and is still being followed around by the same person that keeps bumping in a regular manner then the intent is pretty clear."

This simply means that if you follow the same person from system to system, region to region, and continue to target that one person for bumping, it may considered harassment. CCP doesn't want you to camp an individual for his or her entire EVE career, in other words. This has always been the rule, and has no applicability to the New Order, since we don't do such things and never have.

So after all the sound and fury, there's no change to the rules on bumping. Yet it's a significant development. The whining carebears of highsec have spent year after year demanding and receiving all kinds of nerfs to highsec aggression. When the barge buff of '12 brought miner ganking to "historic lows", the miners turned their complaints toward miner bumping. Hundreds, thousands of petitions have been filed. The carebears made all the same moves against bumping as they did against everything else. They filled EVE-O with their complaints. An official inquiry was launched.

This time, however, we had a new experience. CCP said "no".

The carebears were outmatched and outfought on the forums. They were finally rebuffed by CCP, the tool with which the carebears have beaten down so many good and proper game mechanics. The carebears received that measure of disappointment which they have so often meted out to others. 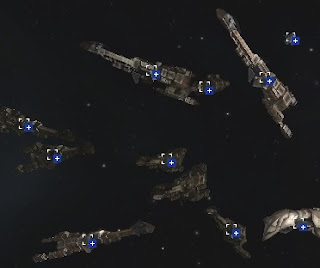 So let's celebrate with a bumper fleet!

Everyone who can fly a ship is invited. We shall assemble our Stabbers, our SFIs, our Machariels and Fleet Typhoons and comedy ships of all kinds. We'll meet at the historic Brapelille ice field, birthplace of Agent BillMurray and the site of the ruins of Gallente highsec's former ice mining capital. And from there, we'll tour some other notable spots. Enjoy the celebration. You've earned it.
Posted by MinerBumping at 21:04