When the New Order first arrived, we promised to help everyone in highsec realize their full potential. Four million MinerBumping hits later, we're still keeping that promise--in ways no one could have dreamed. 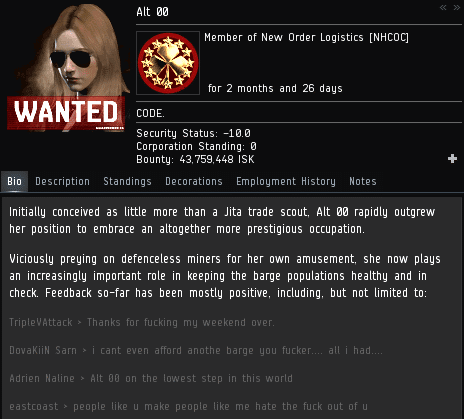 Consider Alt 00, who rose from her humble origins to reach the pinnacle of elite PvP in EVE: becoming an official Agent of the New Order. The Code made this possible. 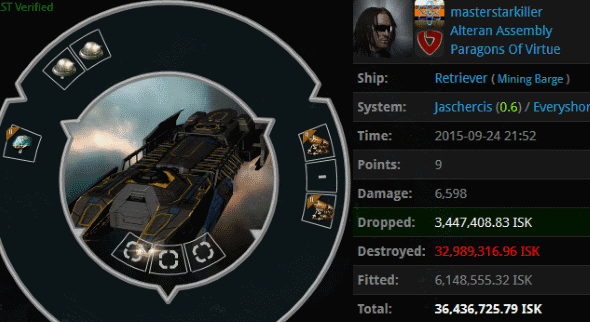 When Alt 00 met him, masterstarkiller was your typical Goofus, lazily piloting a Retriever while AFK. He did everything halfway, if he did it at all. Alt 00 woke him up with a gank.

When masterstarkiller returned to his keyboard, he was horrified to discover his Retriever was missing. Sometimes you don't appreciate what you've got until it's gone. 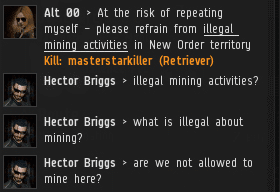 masterstarkiller's death was not in vain. Our Agent used him as an example to teach the other miners in Jaschercis local. She could only pray they'd listen.

The pushy miner hadn't gotten a response to his EVEmail yet, so he rudely butted his way into the ongoing chat in local. Alt 00 received him graciously. 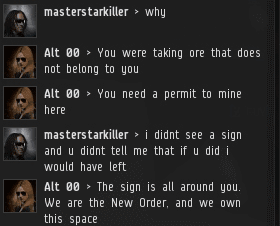 A wicked and bot-aspirant generation of carebears demands a sign. But they were already sent the Code. 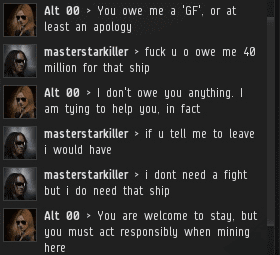 For no apparent reason, masterstarkiller felt entitled to a full refund of his 36.4 million isk ship. He took the liberty of rounding up to 40 million isk. Hey, why not? He'd earned it, right?

In fact, the miner was indebted to Alt 00. He owed her 10 million isk for a permit, plus a "GF" or equivalent congratulations for her PvP victory. And he was flirting dangerously with a Red Pen fee. 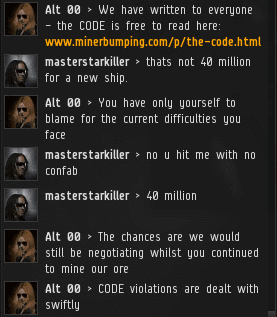 The miner rejected our priceless Code in favor of 40 million isk. It was as if he only cared about money. If this is what new players have to offer our community, I don't know why we all care so much about retaining them. 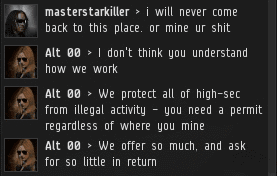 It was then that masterstarkiller learned he was dreadfully mistaken about the nature of highsec. It wasn't only the Jaschercis system that was governed by the Code. He would need to rethink everything he thought he knew about EVE. 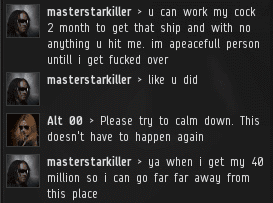 Even though he was explicitly instructed to calm down by a duly authorized Agent of the New Order, masterstarkiller was heading in the opposite direction. It was time for Alt 00 to put a stop to this unseemly display. 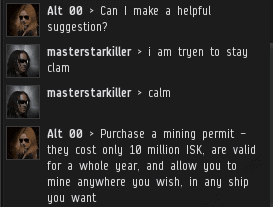 There it was, a perfectly reasonable solution to all of masterstarkiller's problems. He didn't need to go any further down the road to a meltdown in local. If he chose the Code now, everything would be fine. But if he rejected the Code, the situation could get ugly.