The Education of Qila McClusky, Part 4

Previously, on MinerBumping... Osmon local was treated to an extended screaming fit courtesy of Qila McClusky, who was ganked by Agents Liek DarZ and Plasma Death for the crime of illegally flying a fail-fit Retriever. Qila had also been ganked the previous day for the same reason. Agent Liek tried to persuade Qila to pilot a tanked Procurer instead, but she adamantly refused. Qila insisted that she would rather quit the game than give up her AFK, untanked mining lifestyle. 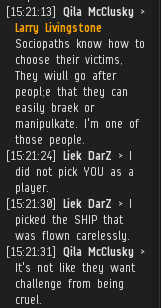 Having suffered two Retriever losses, Qila was ready to conclude that CODEdot was filled with sociopaths. She absolved herself entirely. At no point did she consider that she might try following the Code while in New Order territory.

In the old days, Osmon local was completely silent all day. Before the New Order, almost no one ever spoke outside the trade hubs. Today, a place like Osmon can host a conversation on topics like philosophy and crime prevention. 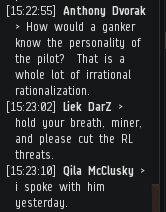 Osmon residents took courage from the presence of Agents in local. They began to question the carebear themselves. To do this, they needed to be at their keyboards. Another victory for the New Order! 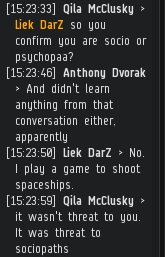 Qila had threatened to kill sociopaths IRL, but pointed out that claiming it as a real-life threat would require an Agent to confirm that he was a sociopath. It was merely a conditional EULA violation. I'm surprised more carebears don't try this. Could a new field of space law be in development? 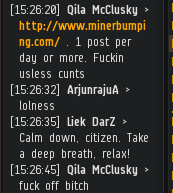 Instead of educating herself about the Code, Qila only went to MinerBumping to count up the number of posts. She was horrified by the sheer volume of content. As I've said before, carebears are not just anti-ganking; they're anti-content.

Qila was now approaching the two-hour mark since she'd lost her Retriever. Yet she was still complaining in Osmon, and was as self-righteous as ever. 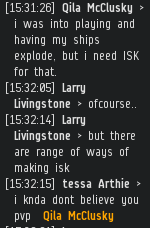 Although Qila insisted all along that she was primarily a wormhole PvP'er who lost "hundreds" of ships in battle, Osmon residents began to doubt the carebear. Our enemies are our best recruitment tools.

In spite of everything, Qila maintained that she enjoyed PvP'ing and losing ships. (Except when she lost a battle to a sociopath, in which case she was obliged to rant and rave in local.) 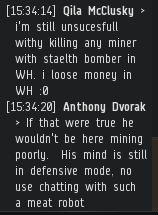 As time went on, the Osmon population rallied behind our Agent. They didn't want to be like Qila McClusky. They looked into the abyss of the carebear mind, and they recoiled from it. Agent Liek DarZ left Osmon, satisfied that he had done a good thing for highsec that day. 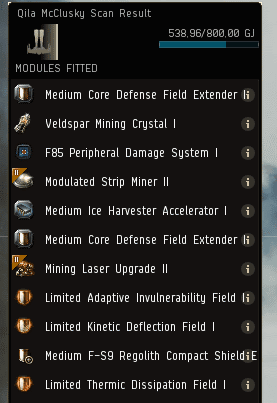 Later, Liek's super-secret scout alt returned to Osmon. He discovered Qila mining away. Her ship was still fail-fit, but it was mostly tanked! 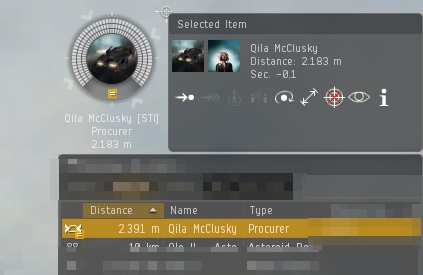 'Twas a minor miner miracle. Qila actually started using a Procurer, just like Liek had been trying to get her to do from the beginning. She still lacked a permit, but the progress shown here was breathtaking. 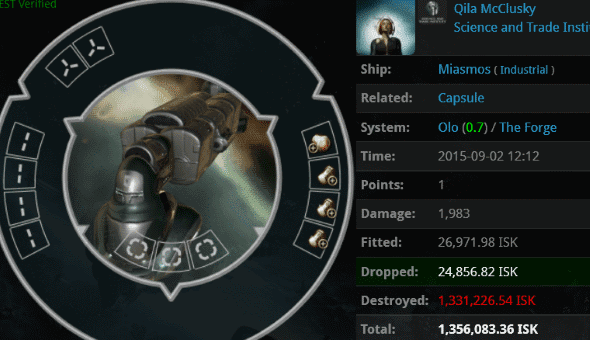 The next day, Liek happened to run into Qila again. Her education--like the education of all highsec--continues. We won't be satisfied by anything less than perfection.
Posted by MinerBumping at 17:22