The big news out of the EVE fan events last week was the unveiling of real-life laminated mining permits, which were issued to some CCP devs as a token of the New Order's appreciation for all their hard work. You already saw CCP Shadowcat's famous tweet, but there was more to the story: 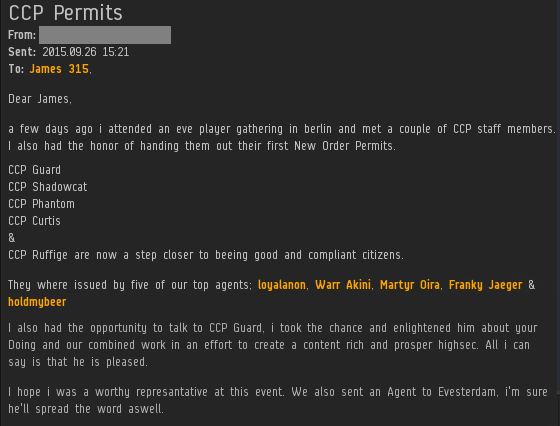 Our humble Agent requested anonymity. This is the kind of news that warms an EVE player's heart. Just picture CCP Phantom, who has locked so many threads on EVE-O, being given the chance to carry his very own mining permit. 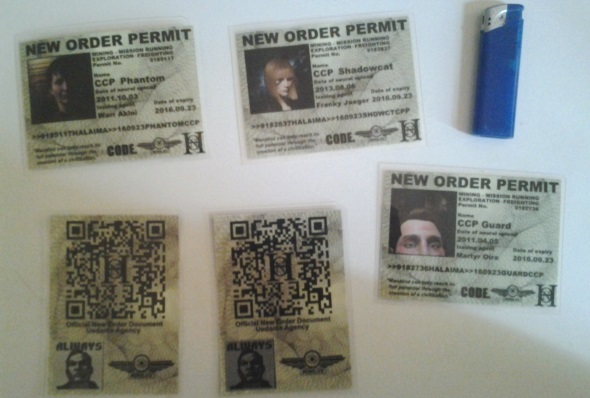 A photo of the five permits was provided by our Agent. Two of them were flipped over so you can see the reverse side, which was also intricately designed.

It sounds like a good time was had by all. Who could object? You guessed it: The Anti-Gankers and bot-aspirants of highsec squealed in disapproval when they saw CCP Shadowcat's tweet. Partly this is because the New Order's enemies have always tried to deprive our cause of legitimacy. However, it's also because our opponents are more Anti-Fun than Anti-Gank (most of them have never tried to stop ganks, and fewer have succeeded). By definition, carebears don't have fun in EVE; bot-aspirants grind isk while AFK. They think the point of EVE is to make money, not to enjoy a game. So they see no problem with stopping other players from having fun.

The CCP permits were a bit of fun that any reasonable person could enjoy. Even in the EVE Subreddit and on EVE-O, both of which have more than their fair share of GRRR CODE types, the reaction was mostly positive.

Everyone was having a splendid time. Normally curmudgeonly ISD members cracked a smile. In a day and age where nullsec is withering away and EVE players have become unused to content, it was an opportunity for all to bask in the warm glow of New Order creativity.

I would add one other label to the enemies of the New Order: Content-averse. We've often heard about EVE players being too risk-averse. There is truth to that, of course, but increasingly we've seen the "theme park" crowd objecting to content creation in general. The content-averse don't want to see players creating and enforcing a Code, or innovating new ways to gank freighters, or designing real-life mining permits. They want peace and quiet, for EVE to be a silent, colorless platform for their boring, automated PvE. May it never be so!
Posted by MinerBumping at 18:11