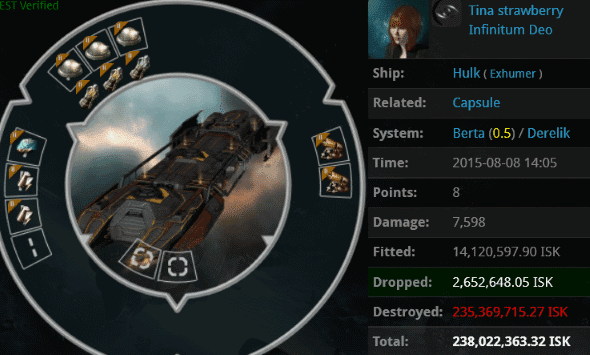 Some people don't like picking strawberries, but our Agents don't mind it. Keraina Talie-Kuo and Krominal spotted a fail-fit Hulk operating in a quiet little system. They terminated it.

Surprise! The Hulk was part of a little strawberry patch of mining alts. One of them spoke up. It was Doctor Schutz, whose similarly named alt Dr Schutz had previously been the subject of a minor study. 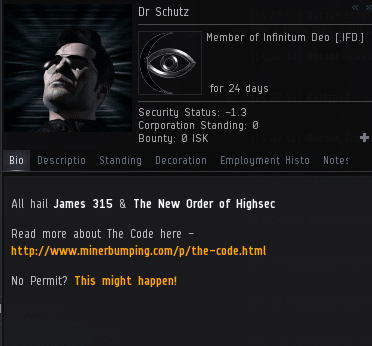 The mad doctor had originally been persuaded to support the New Order, but when his permit was revoked for AFK mining not long afterward, he underwent a Jekyll-to-Hyde transformation.

Now it was time for the doctor to get his check-up. Agent Kalorned and his ganker alts had provided Doctor Schutz with a surprise follow-up examination.

Despite having several months to reflect on his failings, Schutz showed no signs of warming to the New Order. It was as if he believed the answer to life's problems was mining in highsec, rather than obeying the Code. He had a peculiar philosophy.

Schutz was now an opponent of suicide ganking. He felt it was too "lame" to be considered content. AFK mining, on the other hand, was enough content to keep him paying four subscriptions each month.

Doctor Schutz explained that his mining was superior to Kalorned's ganking because he could do it while performing his real-life job. Assuming someone employs Doctor Schutz, I'm sure they would agree that the two activities should be kept separate.

Now the doctor began to psychoanalyze Agent Kalorned. Yet Kalorned was a happy, healthy citizen of the New Order. He'd just achieved self-actualization with a successful suicide gank. Schutz was the one with the dead Hulk and the attitude problem.

Meanwhile, a stray pilot flew through local and cheered on the New Order. I remember when we only received jeers and threats in local. We're winning hearts and minds every day.

Doctor Schutz considered himself an expert on the inner workings of the New Order. The 10 million isk mining permits were the Order's main source of income for Catalysts, he explained. (Someone needs to tell this guy about our exciting shareholder opportunities.)

Like many miners these days, Schutz was the recipient of multiple ganks from different Agents. While it's true that all of our Agents enforce the same Code, Schutz failed to appreciate all the unique little flourishes they add to the process. 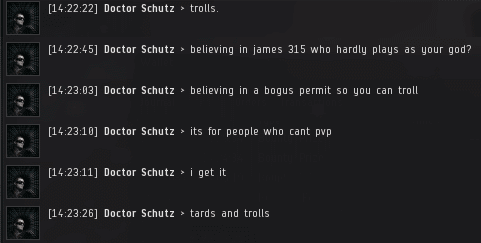 Doctor Schutz was working himself up into one of those angry soliloquies that rebel miners are famous for. But suddenly his speech was cut short when Kalorned's alts landed on Dr Schutz's Covetor and also destroyed his 98 million isk pod. With any luck, the gank would knock Doctor Schutz back to his senses. Or would he only become even more detached from reality?