Catalyst Training Under the New System

In its ongoing effort to attract new players to EVE, CCP has significantly boosted the amount of skillpoints that all new characters start with. You know what that means...

New Order theorycrafters leaped into action. As you can see from the list of the new starting skills, freshly rolled characters start with a lot of the skills needed by ganker alts. For example, newbies begin with the ability to overheat their weapons, which formerly took quite a bit of training time. In addition, many support skills no longer need to be purchased, simplifying the training queue.

The much-loved and much-read Evolution of a Catalyst Pilot post is now out of date, though it still contains useful information. Led by Agents Tisiphone Dira and PV Rock, a new skill plan was charted by our theorycrafters.

Let's cut to the chase: How much simpler has CCP made training for a Catalyst alt?

Depending on what mid-slot modules (if any) you'd like to use, you'll likely run into CPU issues, but you can already fly a Catalyst and fit Tech I or Meta guns and damage mods. Here's the list of additional DPS-related skills that Tisiphone cooked up:

That's a much shorter road to Tech II fitted Catalysts than before. More skills:

For the default T2 Catalyst fit, see below: 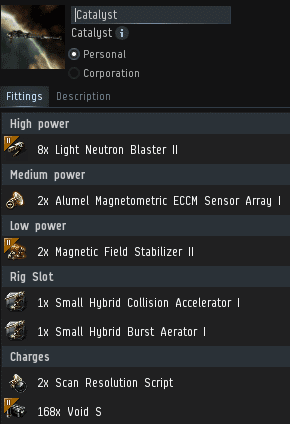 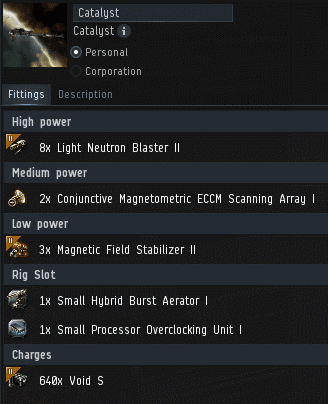 Regardless of the route chosen, it's clear that a new player can begin killing bot-aspirant carebears at a greatly accelerated rate. Consider the NPE (new player experience) enhanced.

A link to this post will be added to the Gank page, where you can find all sorts of information about ganking to enforce the Code.
Posted by MinerBumping at 17:54