Concerned rebel onlookers often ask, "Why doesn't anyone stop the New Order? Surely it can't be because of their greatness or their Code." To defeat the New Order, the rebels would first need to come up with a plan. Now it seems they've got one: 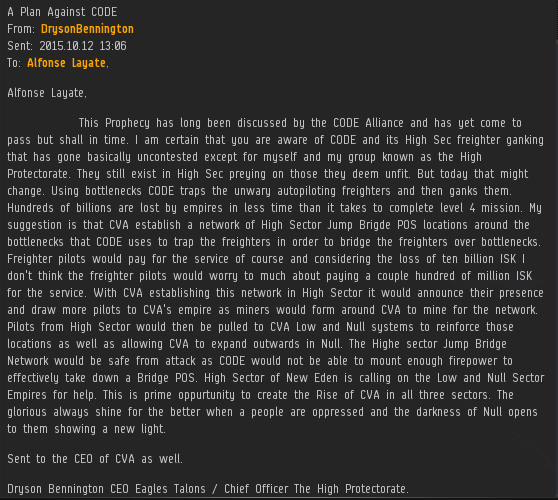 Elite PvP'ers from Provi and highsec jump bridges? That can only mean it's time for another edition of the Highsec Miner Grab Bag!

DrysonBennington has his secret weapons, and we have ours: DDoS attacks employed with such surgical precision that they only disconnect a single freighter pilot.

Anti-Ganking was infuriated when they learned that the New Order wasn't going to help them fund an event. It's just as well. Anything that comes from Anti-Ganking, no matter how well-intentioned, is bound to be toxic.

Ever wonder why you can send a personalized message when you notify someone that you're adding them as a contact? I'm convinced that it's intended as another tear distribution mechanism.

Tom Omaristos was displeased when his illegal mining operation was terminated by a member of the Proper Mining Etiquette corporation.

However, Tom saw little value in etiquette, and he had no patience for social climbers.

But the New Order doesn't believe in dynasties or aristocratic privilege. In modern highsec, every miner can aspire to become a Gallant. 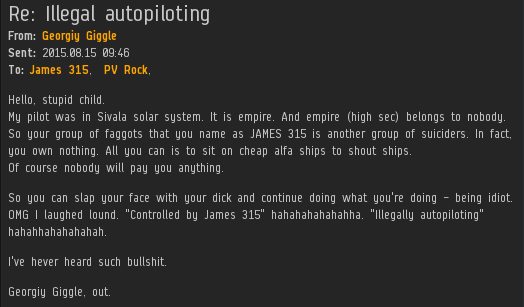 A nihilistic carebear declared that highsec belongs to nobody. Actually, highsec belongs to all of us, and therefore we all share a responsibility to make it a better place. That's why everyone agreed--or was deemed to have agreed--to comply with a set of rules. Didn't this guy ever read the Code? This is exactly why carebears needed a responsible person to vote as their proxy.

Romulis Blakk claimed his pod was defenseless. He must have forgotten about his pod's ability to instantly warp away whenever threatened. No wonder he lost the duel. 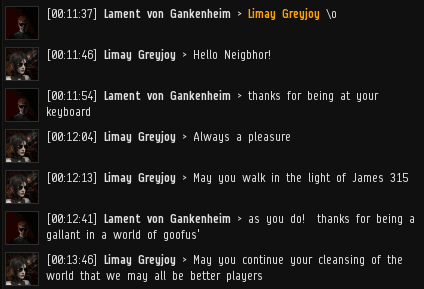 It's a pleasure to watch highsec become more Code compliant each day. Limay Greyjoy demonstrated proper etiquette when greeted by an Agent in local. The benefits of civilization are well worth our efforts. 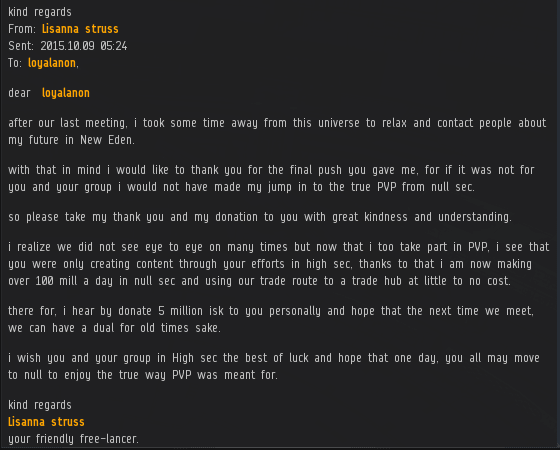 The notorious Lisanna struss, notable for his resistance to the Code, charming sister, and checkered espionage career, has had a change of heart. A pattern has emerged among the former rebels: The more they think, and the less they mindlessly grind isk, the more likely they are to realize that we're the good guys. Time is on our side.
Posted by MinerBumping at 19:10