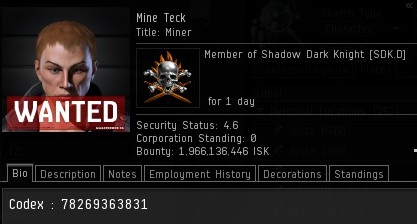 The EVE community was delighted by the SoundCloud recording of Mine Teck's complaints about the New Order on TeamSpeak. Some are already comparing Mine Teck to other highsec luminaries, such as Moonsong Miner and Capt Lynch. Mine Teck received a 2 billion isk bounty, courtesy of Powers Sa of the Goonswarm Ministry of Love. Some of the bounty has already been collected, but there's still a long way to go. 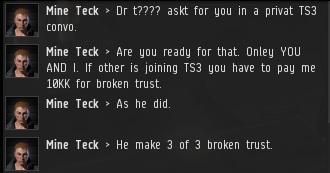 Mine Teck wasn't satisfied by the outcome of the conference on TeamSpeak. In particular, he objected to the way Agent Dr Tyler invited multiple Agents to join the conversation without Teck's permission. Teck convoed Agent Fawn Tailor and requested another TeamSpeak conference, this time strictly one-on-one.

Teck repeated his threat from the conference: If his problems were not solved, he would join the anti-Order resistance. The stakes could not be higher.

Teck conveniently provided some exposition. He had purchased mining permits (at the wrong price) for nine characters, but did not include a pledge of loyalty to me and/or the New Order in their bios. This is a mistake. It's like getting a driver's license but not carrying it with you when you drive your car. To receive the benefits of your permit, you must display it in your bio.

Negotiating with an Agent of the New Order can be trying, given our immense power. But Teck had a bargaining chip he intended to leverage: Kill rights on some -10 sec status ganker alts. Fawn was prepared to play hardball.

Teck is not easily intimidated. He was prepared to unleash the full force of his power. 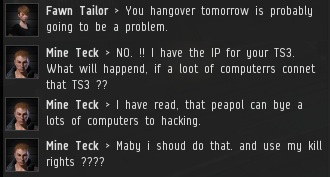 The situation escalated quickly when Teck unveiled his DDoS threat. If properly executed, it could have a devastating effect on the New Order's conferencing capability.

The New Order is no stranger to DDoS threats. When this site was still new, miners often threw around the idea of DDoS'ing MinerBumping. The site is hosted by Google; their servers have withstood the attacks so far.

Teck claimed the moral high ground. According to him, DDoS'ing a TeamSpeak server is no less criminal than charging 10 million isk to mine in a highsec ice field. The negotiations between Fawn and Teck began to disintegrate.

Interestingly, Teck believed that if a settlement could not be reached, and if the two sides went to war, he would still receive his money back. No wonder he thought he was negotiating from a position of strength.

Teck took the matter to local, appealing to the Kamio mining community for support. Even rebel Talon Blacksheer was unmoved. 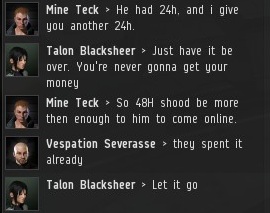 The deadline was set. Either the leader of the New Order would reach an agreement with Mine Teck, or something bad would happen. Could war be avoided in time? Was this the end of the New Order?

To be continued...
Posted by MinerBumping at 20:02