Answers in the Code

Supporting the New Order of Highsec is not for the faint of heart. It requires courage. The New Order is constantly in conflict with other EVE players. I don't mean that merely in the sense of pew-pew lasers flying back and forth, the way EVE players normally battle. I mean conflict in the sense that other players disagree about the legitimacy of what we do. 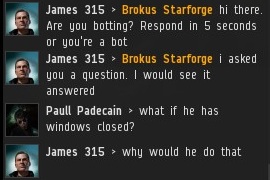 Wherever we go, so many questions arise. Fortunately, we can find our answers to those questions in the Code. Case in point: I didn't need to worry about whether Brokus Starforge had windows closed, because the Code tells us that highsec miners are required to watch local at all times.

After Brokus was sent out of mining range, but before his lasers deactivated, he passive-aggressively gave me the Carebear Stare by yellowboxing without any possibility of actually activating weapons. 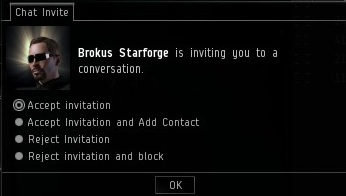 It's funny how even the most silent, AFK miners get in a chatty mood once they're no longer able to mine.

They may spend their days (and nights, with proper macros) mining ice, but carebears tend to be bad at breaking the ice. Our convo was off to a terrible start. Who invites you to a convo only to tell you to "gfto"?

Brokus gave me a standard-issue excuse. The good news? He might have been playing on another account before, but now he was playing on this account. 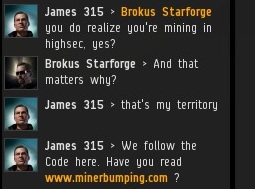 Brokus didn't seem to know the score, so I referred him to the most helpful website I knew of for new EVE players. Problem solved, right? I wish! Upon seeing the link to my dreaded MinerBumping, he immediately closed the convo.

I believe in total transparency, so I informed the locals what Brokus had done. Brokus was immediately put on the defensive. 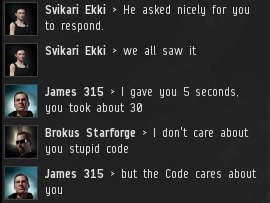 The Code is crystal clear. Brokus was in the wrong. But he had not yet learned his lesson; he warped to the other end of the ice field. 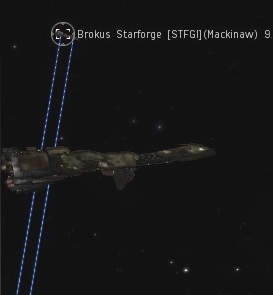 He attempted to repeat his mistake, but ended up getting the same result. To expect otherwise is the very definition of insanity! 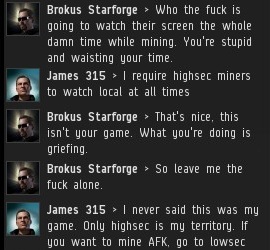 Once again, the Code provided the answer to Brokus' complaint. It doesn't really matter whether a miner thinks it's boring to mine at his keyboard or not. They have to do it anyway. The Code is very clear on this point. However, just as so many carebears invite me to go to lowsec if I want to PvP, I invited Brokus to go to lowsec if he wanted to mine AFK. They're the ones who say only certain activities should be allowed in highsec, right?

Brokus attempted to belch out a smokescreen about what constitutes AFK mining. Thank goodness for the Code! There's no ambiguity: The test of AFKness is whether or not a miner can promptly respond when I talk to them in local. 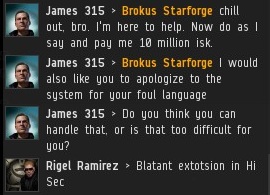 Now Brokus Starforge was fully educated. But it's not enough simply to know what's in the Code. Even dedicated resistance fighters have read the Code--some know it inside and out! The true test of a miner's worth is whether or not he follows the Code. 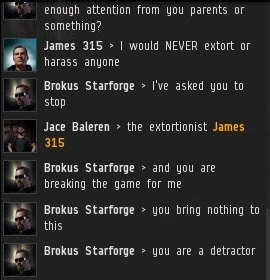 Sadly, Brokus chose the wrong path, and denied the value of emergent gameplay and order in highsec. He only saw value in watching his isk counter tick slowly upward toward some unspecified goal. I ask you, what kind of a game is that? Wouldn't it be just as fun to watch your clock tick upward, or to watch your calendar move forward?