The Streets of Gotham, Part 1

Another peaceful day in Kamio. The sun was shining, the birds were chirping, SPIONKOP was complaining about the Code... You know, the usual. 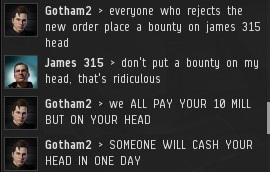 Out of nowhere, someone jumped into the conversation and attempted to defeat me using the new bounty system.

To my surprise, he actually did put a bounty on me, rather than just threatening to do so. He gave his fellow miners a raw deal, putting only 7 million into the bounty pool, rather than the 10 million he encouraged everyone else to place.

The seven million weighed heavily on my shoulders. Would it be just enough extra bounty to make bounty hunters interested in attacking me? 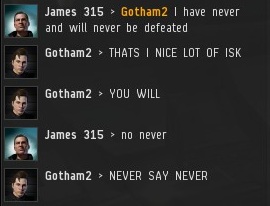 I got Gotham2 up-to-date on my combat history in the New Order era: I have never lost a ship. I asserted that this pattern would continue, but Gotham2 disagreed. 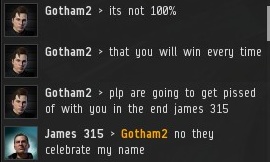 Gotham2 fell into the old rebel pattern of belief in some future retribution from all the enemies I've made. But actually, my popularity has only risen since I began living in highsec.

Without warning, the situation escalated. Gotham2 wanted a fight. 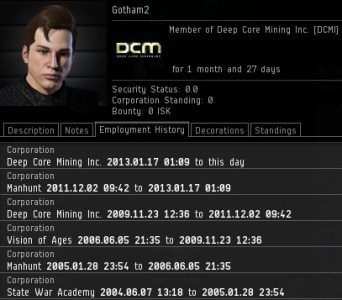 I did my research. He was a 2004 character, so he could have some combat skills trained. It was time for a serious duel. 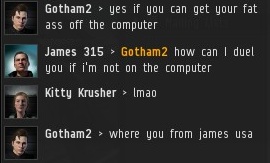 But there was some confusion. Did Gotham2 want me to duel him whilst AFK? How would that work? 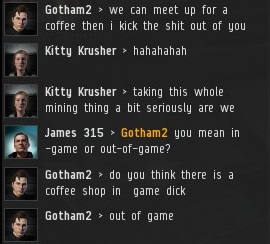 Another sudden escalation: It sounded like Gotham2 wanted to arrange an out-of-game duel at a coffee shop.

Gotham2 offered confirmation of his proposal to duel with fists in lieu of blasters (or possibly mining lasers in his case). And he was certain that he would win. 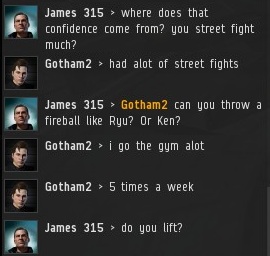 Gotham2 wasn't just any old rebel miner with 7 million to throw around--he was a seasoned street fighter and gym enthusiast. And the fight for Kamio had only just begun.