The Mine Teck Negotiations, Part 2

Previously, on MinerBumping... I decided to indulge Mine Teck's request for a kind of peace summit, to determine if there was any way we could avoid his joining the resistance. 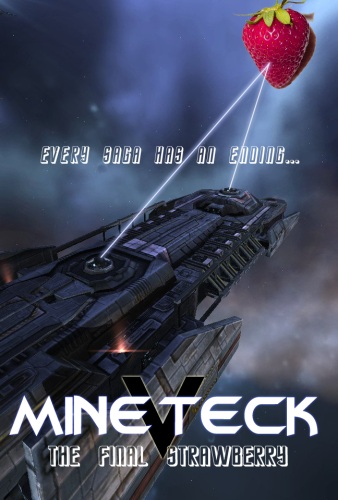 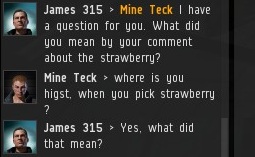 When we last saw Mine Teck, I was asking him about his notorious strawberry remark. Finally, the mystery would be solved.

When Mine Teck picked strawberries, he bent over, leaving his hindquarters the most elevated ("highest") position of his body. The cryptic reference to strawberries turned out to be just an incredibly circuitous way of delivering an insult.

Fortunately, Mine Teck is normally much more blunt. His other famous quote, "What in the HELL are you doing?" is a question that leaves no room for interpretation. Mine Teck would stick to straight talk for the rest of our conversation. 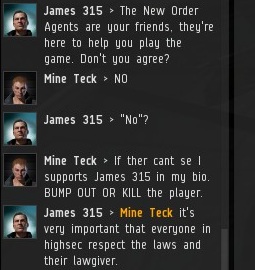 The bio "bumper sticker" issue remained the chief obstacle in our negotiations. 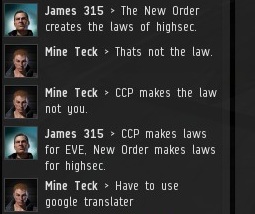 Everyone recognizes that nullsec is governed by alliances, but there's still so much reluctance to accept that highsec may also be subject to the rule of its most powerful inhabitants. 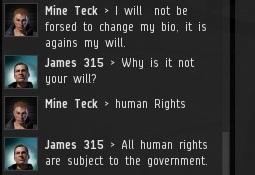 The conversation turned philosophical. Mine Teck had been willing to hand over isk to a New Order Agent, but his bio (which remains empty, now) had to be immaculate to preserve his "free will".

The philosophical debate devolved into the most basic form possible: We exchanged one-word talking points. 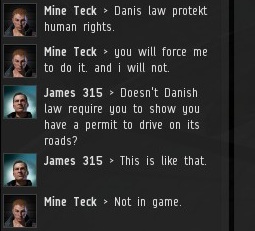 Mine Teck shifted gears and appealed to Danish law on human rights, which variously applied in-game or not, depending on how convenient it was to Mine Teck's argument. 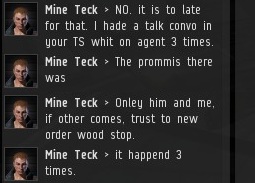 Old grievances resurfaced. One three separate occasions, Mine Teck was promised a one-on-one talk with an Agent on TeamSpeak. But each time he appeared, numerous other Agents flocked to TeamSpeak to listen in.

I urged Mine Teck to be more practical. Anything he says on New Order TeamSpeak is a matter of public interest. 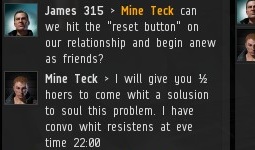 At last, Mine Teck was willing to talk turkey. But as is his custom, he gave me a very specific, limited time to provide an answer. He had an important rebel conference to attend. 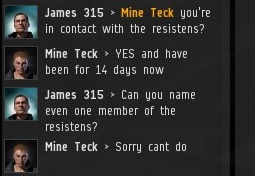 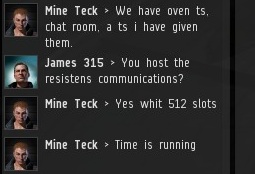 Mine Teck dropped another bombshell: He was responsible for running the resistance movement's own TeamSpeak server and chat room. Two questions came to mind when I learned this. First, what does it say about an organization when Mine Teck is the guy in charge of their communications network? Second, is 512 slots a bit overkill for a movement with so few people? On the other hand, most EVE TeamSpeak servers contain a subchannel for AFK players. Maybe they would need all the slots they could get, just for that. 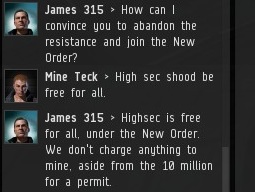 I still believed very strongly that we could reach an agreement. We weren't that far apart on the important issues. 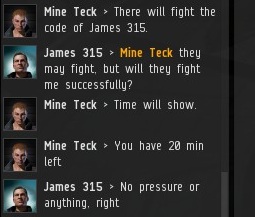 But if a deal could be reached, it would need to be done quickly. The clock was tecking.

To be continued...
Posted by MinerBumping at 17:00