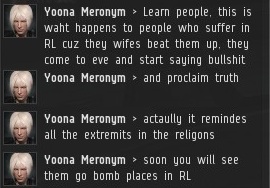 Uh oh, you know what that crying sound means... It's time for the twenty-fourth edition of the Grab Bag of miscellaneous carebear tears. Let's do this!

I have to give Sasha Irkutsk some credit. Up until the last few words, I thought he might know English. 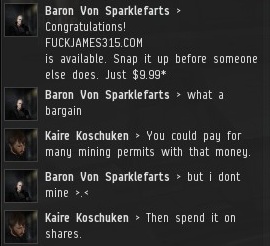 There's been a proliferation of rebel blogs and websites lately. Maybe Baron Von sparklefarts is on to something here. A niche market in the making?

Sometimes angry miners will pop into local with a one-liner like the above, and then disappear. This presents a challenge. How do you engage in a constructive dialogue with people who shed hit-and-run tears? 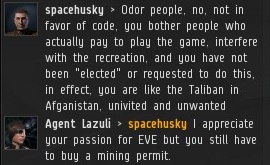 spacehusky claims the New Order is illegitimate. But how do we know if we're uninvited and unwanted? Where is the source of spacehusky's authority to speak for the miners of highsec? Hypocrisy. 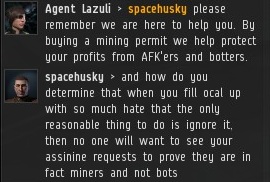 It's typical of rebels to get everything backwards. There are many people who fill up local with hate--but Agents are not among them. 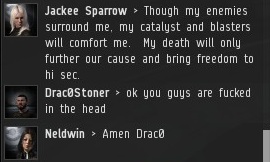 Exhibit A. I much prefer the poetry of Jackee Sparrow to the uncivilized filth of Drac0Stoner. 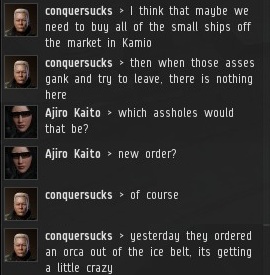 conquersucks had a daring plan: Buy every ship in Kamio, to prevent gankers from escaping. Luckily, no one bothered to execute the plan. It could have been quite embarrassing for him to realize we can travel from system to system in pods. 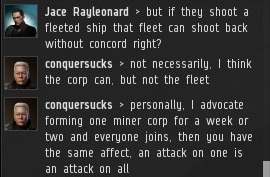 For his next trick, conquersucks recommended all the miners join one big corporation. What could possibly go wrong?

I don't understand people like Widowmaker73 Hita. He knew about the Code, he knew he needed a permit, and he even claims he had the isk ready to go. But instead of taking the initiative to buy a permit, he waited around and got himself killed. Carpe diem, people. 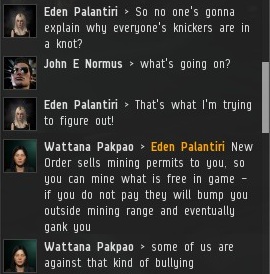 Given the extraordinary fame of the New Order, it's always fun to see someone like Eden Palantiri, a newcomer who had not yet heard of us. 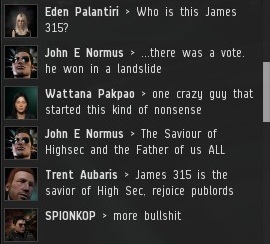 If you were new to the scene, would you be able to look at people like Agent John E Normus on the one hand, and rebel SPIONKOP on the other, and know which side to choose? 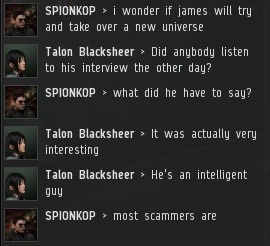 My recent interview on Crossing Zebras got passed around by the miners of highsec. Some rebels even changed their attitudes as a result. Reasoned discourse strikes again! 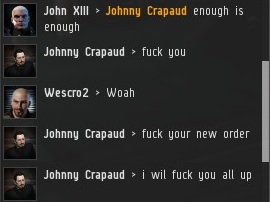 ...But there's always going to be the Johnny Crapauds of the world. 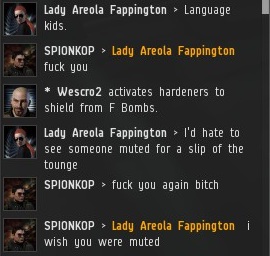 You know how sometimes when one dog starts barking, a bunch of other nearby dogs start barking, too? That's how it is when people like Johnny use foul language in local. 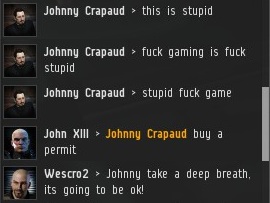 Fortunately, the Agents of the New Order are trained to deal with such creatures. They may be wild at first, but in time, there's not a miner in highsec who can't be tamed.
Posted by MinerBumping at 19:21