Now Is the Time on Sprockets When We Bump 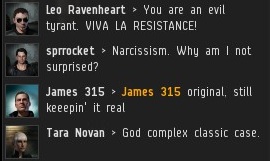 Business as usual in Kamio. I bumped some Code violators in a manner no different than any other day, and the locals were outraged. 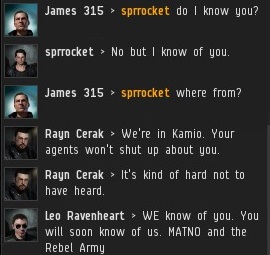 My reputation preceded me. And I was just in time to witness a carebear give birth to a brand new resistance movement. 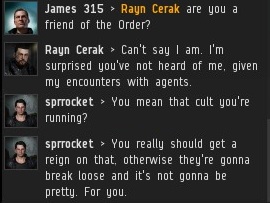 Rebel sprrocket became increasingly agitated as he watched me cleanse the ice field without opposition. 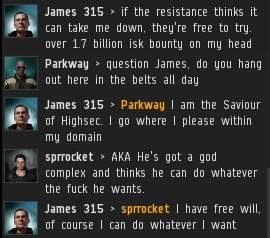 It has become fashionable for Code-violating miners to justify their behavior with the concept of "free will". In the old days, "principle" was the Bingo favorite. But the New Order is all about freedom. 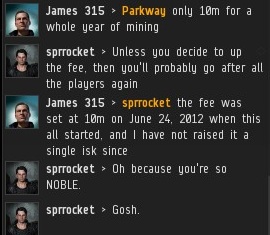 In other ways, sprrocket was like a blast from the past. The "he'll increase the mining fee later" line was more popular when the New Order was just formed. I boasted of my consistency, but he gave me no credit at all.

I'm always delighted when a carebear makes some weird historical analogy. These days, I can sense them right before they occur...

I have heard the 10 million isk mining fee called many things. "Extortion" is the favorite, but also "blackmail" or "protection racket" or "bullying". I think this is the first time I've heard it called a "tariff". That doesn't sound like such a bad thing, really. 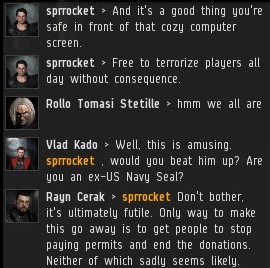 sprrocket's defiance of the New Order didn't win him the friends that he thought it would; he was starting to get a little overheated. 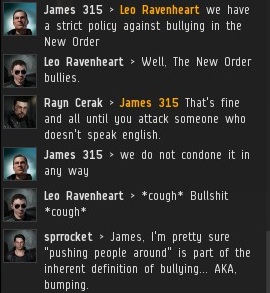 Going back to basics, sprrocket invented a new bit of space lawyering when he explained that pushing ships around is inherently bullying. I wonder what other in-game activities could be given new meanings in this way? 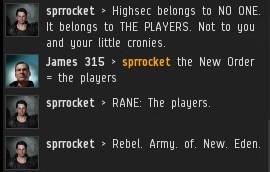 sprrocket decided to join Leo Ravenheart's rebel army. The "army" consists of the two of them. 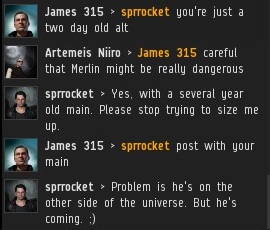 Then he dropped a bombshell: He had a powerful main in nullsec. 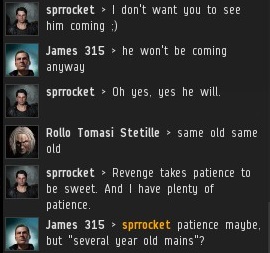 All this time, I assumed I was speaking with a powerless rebel. In reality, I was speaking with the alt of a powerless rebel. Could this be the end of the New Order? Sadly, his main was unable to make an appearance that day. I have to give the rebels credit for one thing: They're extremely good at biding their time.
Posted by MinerBumping at 19:14