Who ever would have imagined, when all this began, that our Grab Bag of highsec miner tears would be so voluminous? We're on edition number twenty-six, and there's no sign of slowing down.

When Knights of the Order gank Code violators, they typically send a form EVEmail to notify them of what happened. Our attacks are not random, after all. This is just a sampling of some of the replies we've received.

sung Nortek reveals what we've known for some time now: Beneath a miner's silent, AFK exterior beats a raging heart. It only needs to be unlocked.

Each carebear is different. Some, like Favorlock, get right to the point.

...While others are more meticulous in their tear production. 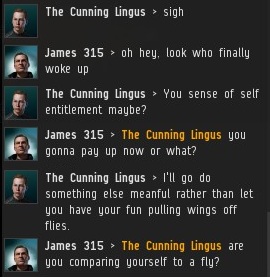 I had to bump The Cunning Lingus out of mining range before he was willing to participate in EVE. I wish it weren't necessary, but I refuse to play a single-player game. 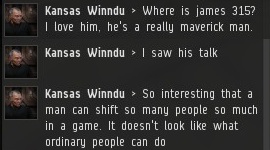 Kansas Winndu lifted my spirits. I'm not certain exactly what he meant, but whatever it was, I took it as a compliment. 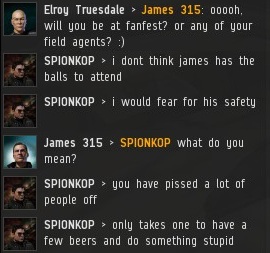 People have long hoped that I would appear at Fanfest. Do you think CCP would give me my own panel? 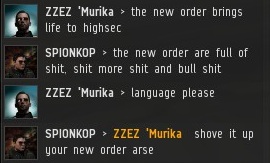 SPIONKOP remains an interesting fellow. After all this time, he continues to follow the New Order around highsec. He doesn't do anything other than complain, though. 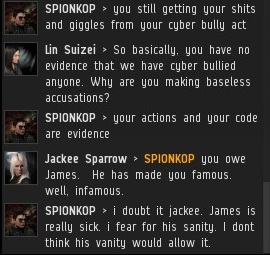 Perhaps if he calls us "cyber bullies" enough, we'll get banned? It worked against The Mittani, so why not?

Ah, the joys of politics. 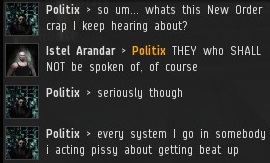 Speaking of Politix, he learned of us through our reputation. The halls of highsec echo with reports about our successful implementation of the Code. But we've still got a long way to go. 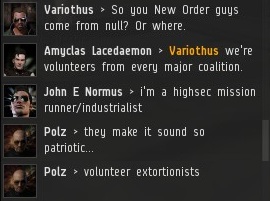 The New Order is one of the great success stories of EVE. Where else can you find so many people willing to put aside their differences for the greater good? 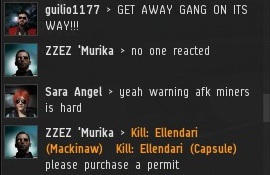 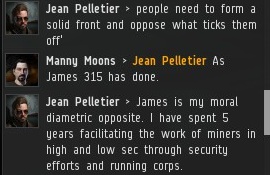 Jean Pelletier fancies himself the anti-James 315. Whilst I am efficient, Jean is very inefficient. It took him five years to teach miners how to activate lasers and go AFK? 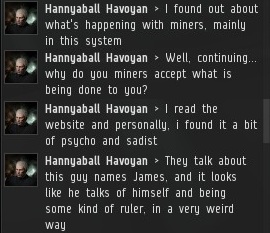 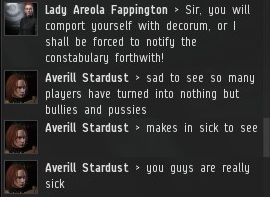 Aside from seeing bot-aspirants blow up in the belts, the one thing that really bothers the rebels is seeing so many of their fellow miners buy permits. At least, that's the impression I got from Averill Stardust's complaint. On the other hand, the kids these days use "sick" as a compliment sometimes. In either case, the New Order shall not rest until we achieve 100% compliance!
Posted by MinerBumping at 18:52