The Mine Teck Negotiations, Part 3

Previously, on MinerBumping... I attempted to find common ground with Mine Teck in order to facilitate peace. But Mine Teck was determined to play hardball, and he gave me just twenty minutes to find a solution to the crisis. 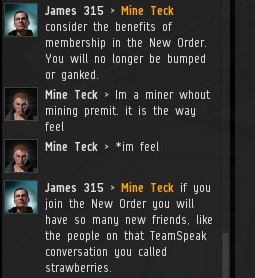 I did my best to highlight the advantages of joining the New Order. Most would agree the New Order is a more attractive option than the resistance.

Out of nowhere, Mine Teck brought up old grievances that hadn't been previously mentioned in our negotiations. In any peace process, this is a big warning sign. 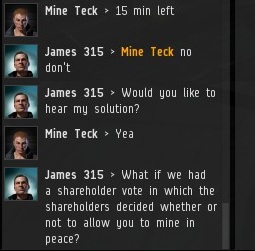 With the minutes tecking down quickly, I offered a compromise solution: Let the shareholders decide. 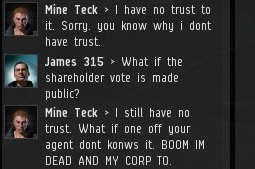 Mine Teck was immediately resistant to the proposal. He trusted neither me nor my shareholders. 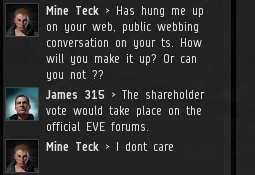 Everyone who has followed the history of MinerBumping knows that our shareholder votes have always been aboveboard. Mine Teck is no historian. 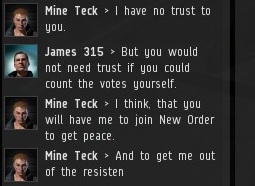 The possibility of a secure, lasting peace between the New Order and Mine Teck was slipping through our fingers. Could two great statesmen really let such an opportunity pass? 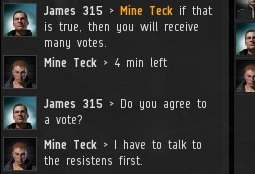 It was coming down to the wire. Only two hundred and forty precious seconds remained.

At this critical moment, the entire summit was nearly derailed. Agent Galaxy Pig randomly appeared in the convo upon my invitation. Mine Teck was sensitive to one-on-one conferences being compromised, so he demanded Galaxy Pig leave. For the sake of peace, he did. 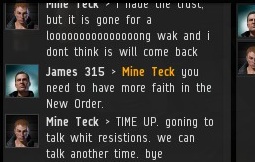 Then it was all over. All our time was gone, and with it, any chance for peace. 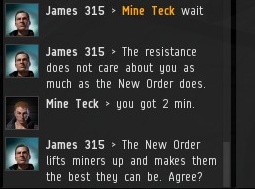 ...Until Mine Teck offered another two minutes. It was a tremendous relief. But the clock was still tecking. 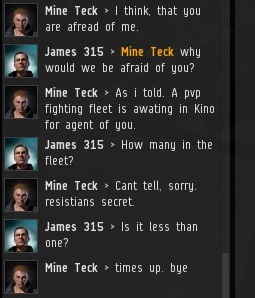 Then it was all over, again. Time was up, and all hope was lost for a second time. Until I receive EVEmails from Mine Teck:

It was a bold offer from Mine Teck, who had heretofore been reluctant to offer any proposals of his own. In exchange for having his corp set blue, Mine Teck would pull the plug on the resistance's communications network. 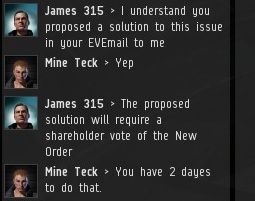 After a couple days, Mine Teck convoed me to get my response. I informed him of the need for a shareholder vote on his proposal, and a new deadline was set. 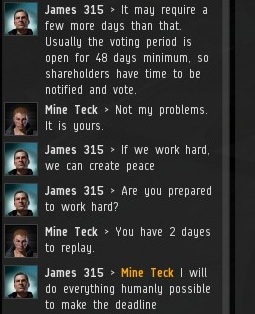 Mine Teck offered but forty-eight hours for an entire shareholder vote to be scheduled and held--a Herculean task. The consequences of failure? Unthinkable.