The New Order, particularly for its size, inflicts a ridiculous amount of isk damage on its enemies. This is partially due to the fact that highsec miners delight in loading themselves up with expensive equipment, all on the bot-aspirant assumption that they are invulnerable. Today's post highlights the highest-value kills inflicted via suicide gank this week against miners who refused--for whatever reason--to follow the Code that everyone in highsec is deemed to have agreed to follow. Let's celebrate the karma that got served up to some of these miners this week.

For purposes of this post, the "week" is February 24th @ 00:00 EVEtime to March 2nd @ 23:59. I took these from the New Order Logistics killboard; remember to submit your high-value kills via EVEmail to me or on the thread on the MinerBumping forum. 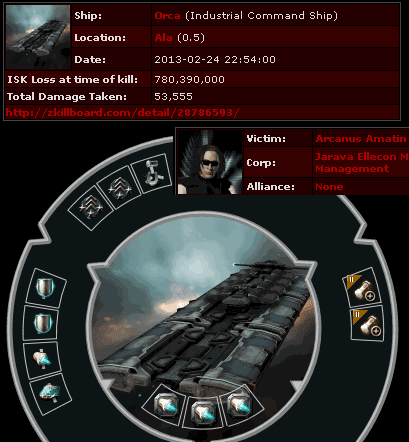 Of course we must begin with the Orca suicide gank. Arcanus Amatin lost his anti-tanked Orca (cargo expanders reduce structure) to our Knights. To be fair, he did have a pair of worthless shield boosters, and a 1mn Afterburner for evasive maneuvers. The Knights involved on this kill were Buck Futz, John E Normus, Capt Starfox, Wescro2, Dr Tyler, Fawn Tailor, Manny Moons, Alice Kinnian, and Sara Angel.

Special credit goes to Buck Futz, whose blaster Talos inflicted a huge amount of damage. He and John E Normus also managed to kill a nearby Mackinaw during the same gank--which was "tanked" with three Civilian Shield Boosters. 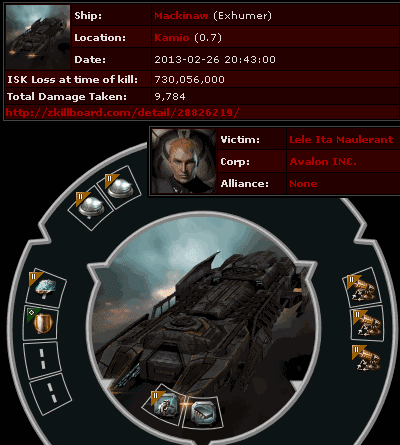 Our high-value mining ship of the week is Lele Ita Maulerant's Mackinaw, killed by Knights Manny Moons, NoseCandy, and Sara Angel. This kill is personal to me, because I was bumping Lele for awhile prior to the attack. He absolutely refused to purchase a permit, and repeatedly warped back to the ice field. If he had only listened, his loss would have been avoided. Instead of trusting in a mining permit, he put his faith in a Caldari Navy Adaptive Invulnerability Field.

Naturally, the faction hardener didn't drop (whoever says SOMER Blink is rigged never met the Loot Fairy). Interestingly, the Mackinaw was equipped with a tech II mining drone rig, which you don't see every day. In any event, Lele lost over 700 million isk worth of Mackinaw that day. Bonus justice came in the form of his nearly 700 million isk worth of implants, destroyed by Sara Angel. 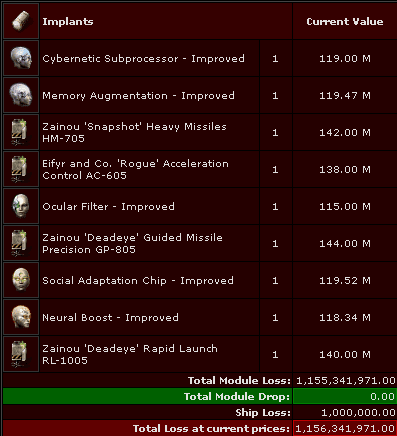 The pod of the week belongs to Sandra Duke, with over one billion isk worth of implants gone in the blink of an eye. The destruction of this pod came courtesy of Knight Buck Futz. I'm always curious what kinds of implants are in the expensive pods. Here, we have a set of improved learning implants, along with a bunch of expensive missile implants. No mining implants to be found. It looks like Sandra is a mission-runner, but she found it's easier to make money by mining ice AFK in highsec.

In case you feel sorry for Sandra, I recommend against it. Her Mackinaw was killed by Buck Futz 32 minutes earlier. Her pod, worth over a billion isk, sat quietly in the ice field for more than half an hour before Buck returned with a Catalyst and put her out of her misery.

Should CCP do more to protect the Sandra Dukes of the world from the Buck Futzes? I'll leave you with that thought.
Posted by MinerBumping at 21:48