Previously, on MinerBumping... Volatile carebear Mine Teck... Actually, I think he's got this covered. Teck, care to bring everyone back up to speed? 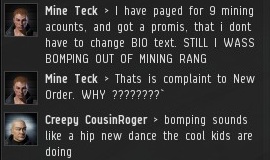 Thank you. Teck's meteoric rise has been an inspiration to many. But he was still focused on his old grudge against the New Order. 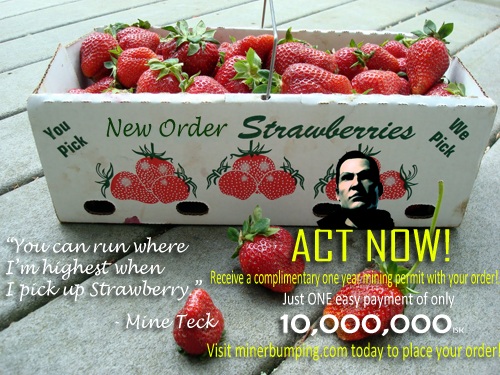 Mine Teck was unable to see that he had become a phenomenon, something much larger than himself. Teck's incomprehensible comment about "strawberry" took on a life of its own. (Credit Levarris Hawk for artwork.) 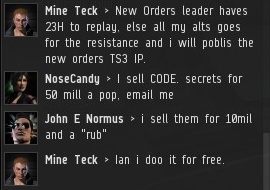 Teck didn't care. He put the New Order on notice. If its leader did not reply to Teck within twenty-three hours, he would join the resistance and make the New Order TeamSpeak server a target for a DDoS attack. The clock was tecking.

Teck also had evidence in his possession which he claimed would prove that not all Agents check the list of mining permits. It's true, of course. I never look through a list of permit-holders; I check their bios instead. That's why it's so important to present one's permit there. 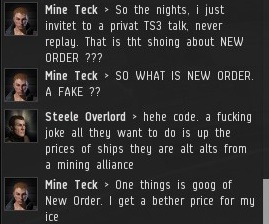 Only one thing was counted in our favor: Teck is among those who believe that the New Order drives up prices. 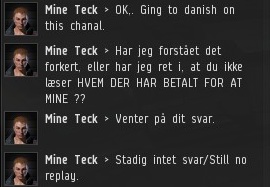 Having made little progress by ranting in Kamio local, Teck switched briefly to his native tongue. According to Google Translate, he's a bit more fluent in Danish than in English, and repeated his questions about Agents not checking the list. 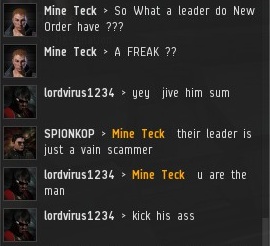 As the diplomatic situation unravelled, Teck began to fall in with a bad crowd. 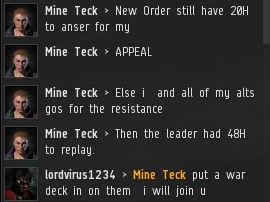 Time kept tecking down toward the deadline. Would the New Order's leader make it in time?

Then Teck threatened to expose the location of some of the New Order's redock bookmarks. Granted, redock bookmarks by their nature are well within docking range of stations and are therefore useless. A bluff's a bluff. 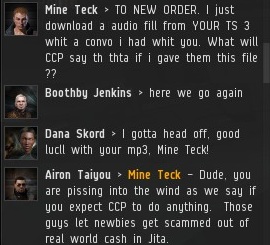 At some point, Mine Teck was directed to the SoundCloud recording of his recent outburst. Teck wasn't ashamed. Rather, he saw the recording as further evidence to be used against the New Order if his demands weren't met. Not to harsh Teck's buzz, but I think a few CCP employees have probably already heard the recording. Am I speaking out of turn?

Over time, the resistance became disenchanted with Teck. He was not the secret weapon he claimed.

But nothing could stop the clock. Unless Teck did mean 191 hours instead of 19. 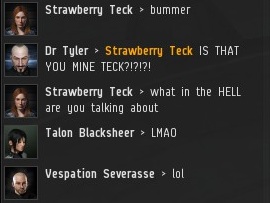 Incredibly, Teck's threats were not taken seriously. He was becoming memefied. What would happen when time ran out? Was this the end of the New Order? In the end, nothing happened. Teck left Kamio without a word, and has not been seen lately. Still, one never knows what the future holds...
Posted by MinerBumping at 19:25