The Mine Teck Negotiations, Part 4

Previously, on MinerBumping... In a desperate gambit to find a solution for Mine Teck's woes, I offered to hold a shareholder vote on his fate. Mine Teck gave me only 48 hours.

Unfortunately, I was not able to even initiate the shareholder vote. I still had a backlog of blog posts to get through, including posts related to the very convos I was having with Mine Teck. 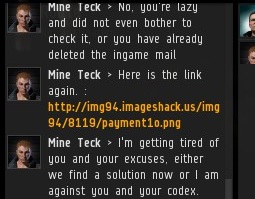 Though the 48 hours had expired, Mine Teck convoed me, demanding a response to a new piece of evidence he had uncovered:

According to Mine Teck, this was proof that he had purchased mining permits for all his characters from ZZEZ 'Murika. But it didn't add up. Mine Teck's original story was that he had paid 90 thousand isk for nine accounts, not that a previously unknown alt had paid 70 million isk. And there was still the matter of the missing loyalty pledge in his bio.

With such incomplete and conflicting evidence, the matter would need to be decided by the shareholders of the New Order. 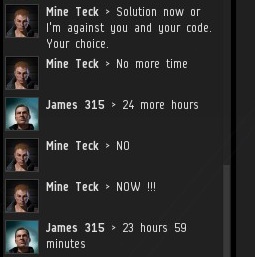 Shareholder votes take time. The shareholders need to be given background information before the vote is opened. Voting is usually open for two or three days. Mine Teck wasn't prepared to wait that long. 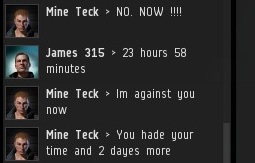 I negotiated frantically, but Mine Teck stonewalled. Time was up, and all hope of a solution was lost forever.

Still, Mine Teck was open to hearing more. 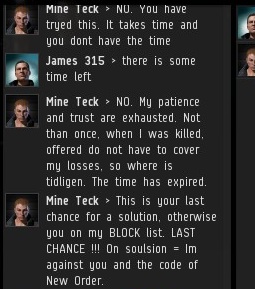 Time was up, but only sort of. I still had one last chance to offer an immediate solution. The stakes were raised even higher now: If I didn't come up with an answer, I would be put on Mine Teck's block list. It was the nuclear option. Without the ability to communicate, peace would be impossible. 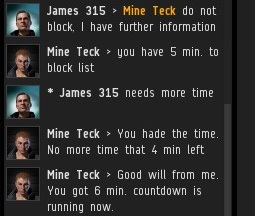 You could cut the tension in the convo with a knife. With just four, five, or six minutes left to doomsday, the tecking of the clock was drowned out by the sound of my racing heartbeat. Do I cut the blueberry wire, or the strawberry one? If this were a TV show or a movie, I would naturally find the answer at the last second. But there are no guarantees here--this is real life. 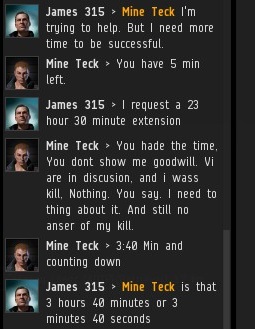 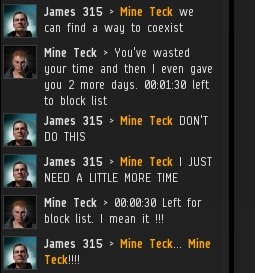 A mushroom cloud filled the sky. There would be no more talking, no more peace. Even if I had an answer, I could not deliver it to Mine Teck.

Mine Teck sent me an EVEmail confirming the worst. He would join the resistance and offer them a free TeamSpeak server, forum, and killboard. It was a disaster of epic proportions. We would never speak again.

...Or would we? Four minutes later, Mine Teck changed his mind and opened the possibility of another talk. The mushroom cloud began folding itself back up.

Yes, and a free netradio.