The Change in Highsec 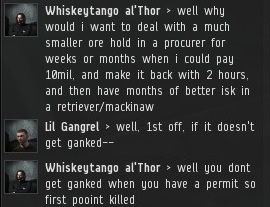 A debate between highsec miners, one of many that has been sparked by the presence of New Order's Agents. 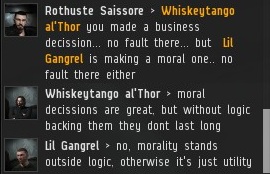 Should miners make the economically rational decision of obeying the New Order, or should they refuse to pay out of principle? 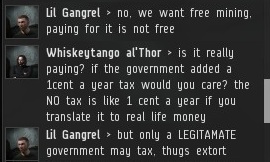 Philosophical debates can last for centuries. In this case, those with the wrong beliefs end up exploding. Miners don't just buy permits--they proclaim the New Order publicly, in their bios. It never ceases to rankle the rebel miners, because they can see the growing influence of the New Order with their own eyes. 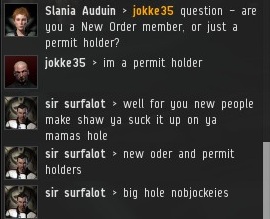 This seems to be a big difference between those who hold permits and those who do not. Permit-holders are easygoing and pleasant. Rebels tend not to be. 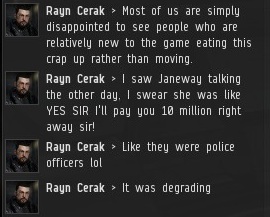 Permit-holders don't much care whether someone else refuses to pay. But when rebels see someone else pay, it bothers them. 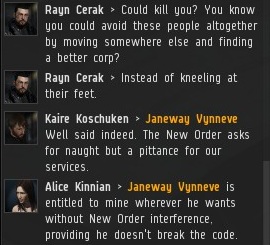 Ironically, the rebel miners--the ones who claim to be for freedom--tend to be the most controlling and judgmental toward others. 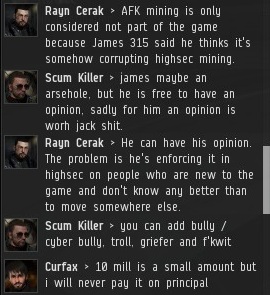 Even supposing a rebel miner gets away without paying his 10 million mining fee, he pays a greater price with high blood pressure, stress, and anger. 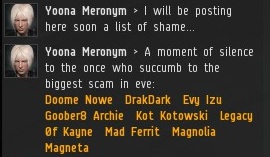 Yoona Meronym is like many rebel miners who comb through the bios of people they see in the ice fields. They become disgusted and enraged by what they see.

The rebels tell New Order Agents to leave miners alone, then they pester their fellow miners. 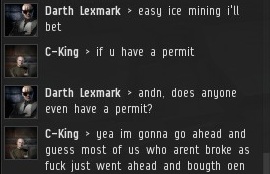 At first, rebels think that by not paying, they can starve the New Order for cash. Over time, that seems less practical. 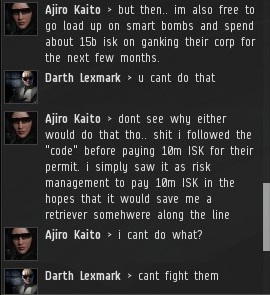 From time to time, there are new plans for armed resistance, but they always end the same way. 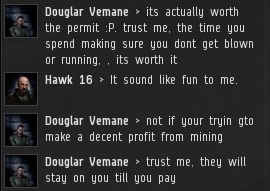 It's a war of endurance. A miner may be willing to fight back for a day, or even for a week or two. But in time, they all come to the same conclusion. Mining is a long-term process. If a mining permit lasts for 365 days, is 10 million worth a year of trouble? 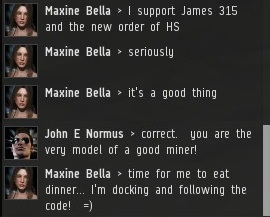 ...And so the change continues to sweep across highsec.
Posted by MinerBumping at 19:12