The Streets of Gotham, Part 2

Previously, on MinerBumping... I encountered an angry miner named Gotham2. When I reminded the system's miners of their responsibilities under the Code, Gotham2 suggested we meet at a coffee shop for an out-of-game duel. 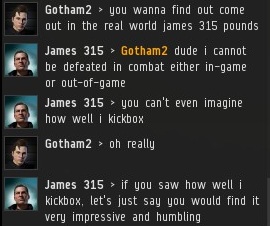 Gotham2 was confident of his out-of-game fighting skills, in the same way that a space lawyer is supremely confident that miner bumping violates the EULA. But I cautioned Gotham2 that I had some skills of my own.

Gotham2 repeated his preference for street fighting, the kind of high-risk, down-and-dirty, no holds barred contest that all carebears love.

As I continued my conversation with Gotham2, my Invincible Stabber surfed through the Kamio ice field. Gotham2 was busy using his nearly 7 year-old character to gather ice in a Retriever. 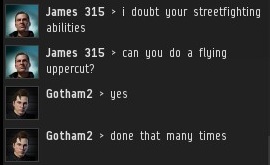 Gotham2 was full of boasts. I always win street fights because no one can defeat my Dragon Punch--but Gotham2 liked his chances.

Even if Gotham2 could counter my flying uppercut, I had more than a few extra tricks up my sleeve. 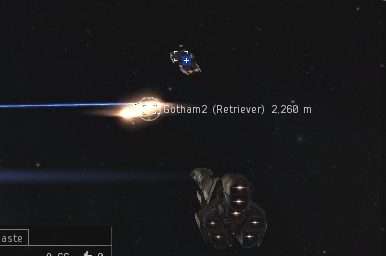 Without warning, I bumped Gotham2's Retriever, and continued to bump it until he was well outside of mining range. He was taken completely by surprise. No holds barred, right?

He didn't take it as well as he could have. Unable to seize the advantage in the arena of the Kamio ice field, he still longed to fight me on his own turf, at the coffee shop. 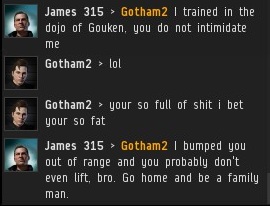 Gotham2 was unable to counter my Invincible Stabber's bumps. It was time for him to admit defeat in an honourable fashion. 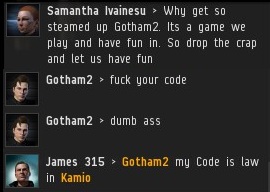 Instead of a "gf" in local, Gotham2 continued to rail against the Code.

I had to ask myself, how mean must those streets be if he gets an adrenaline rush from AFK ice mining in highsec? 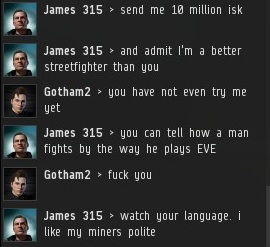 Gotham2 warped back to the station, where he remained for several minutes. After bumping some other Code violators for awhile, I watched Gotham2 return to the ice field. I swiftly returned him to the penalty box and tried to instruct him. But the unruly student would not have me as his sensei. 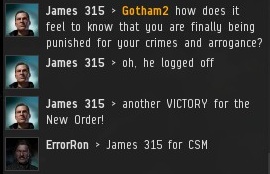 Gotham2 logged off in disgust, and the Kamio system was improved thereby. Somewhere in the world, a troubled young man returned to the local gym to practice his flying uppercut.
Posted by MinerBumping at 18:56