Previously, on MinerBumping... Hydra Fire won a chance to play a special bonus round with prominent Jita businesswoman Erotica 1. All that was required was for Hydra to put total faith in Erotica, transferring all of his assets to me (as escrow agent) and being completely honest. He sent me his stuff, and everything looked good. But as Erotica put 25 billion isk into the trade window and prepared to give Hydra the big payday, a ringing telephone could be heard over TeamSpeak. 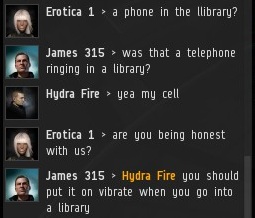 Everyone in the bonus room was stunned. Had Hydra lied about being in public, in a library? Hydra claimed it was his cell phone, but it sure didn't sound like it. 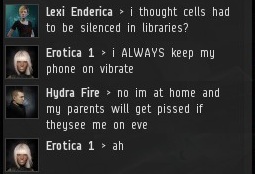 Hydra broke down under intense questioning: It was all a lie. He was actually at home. The reason he sang "I'm A Little Teapot" and "Love Potion Number 9" in such a hushed voice was to avoid alerting his parents. It had nothing at all to do with being courteous to his fellow library patrons. 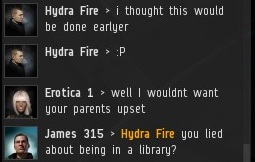 I couldn't believe Hydra could be so reckless. Just moments earlier, he seemed on the level. Now it all had to be called into question. 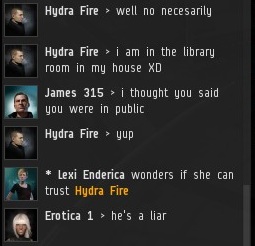 Hydra attempted to spin it, but there was no denying that he had lied about being in public. The outcome of the 25 billion isk bonus game was now in jeopardy. 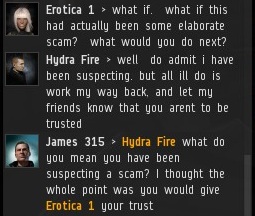 We investigated further. Hydra now admitted that he hadn't put his faith in Erotica. He was willing to give up all of his in-game possessions, but he suspected it of being a scam all along. 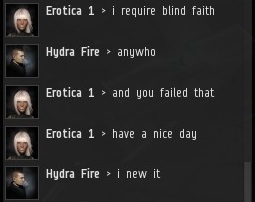 Hydra had officially broken the rules. Erotica quickly aborted the 25 billion isk trade window he had opened with Hydra.

Surprisingly, Hydra did not offer any apology. He appeared totally unrepentant about trying to scam Erotica with his lies. 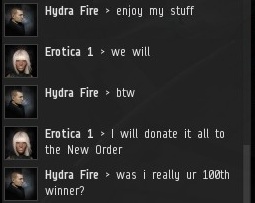 As the escrow agent, I held all of Hydra's assets in trust. Since Hydra failed the bonus game, these items belonged to Erotica 1. She told me that I should consider the properties a donation to the New Order, so I held onto everything. 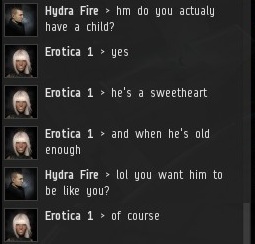 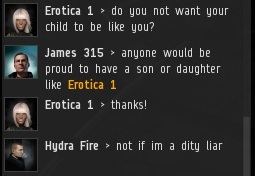 No one could argue that the result was unfair. But Hydra began to reveal that he harbored all kinds of dark suspicions about Erotica. So much for "total faith".

Then Hydra dropped another bombshell. He claimed that he had lied about transferring all of his assets to Hydra. So either he was lying then (and had deliberately broken the rules of the bonus game), or he really hadn't kept assets on an alt, and was lying now. 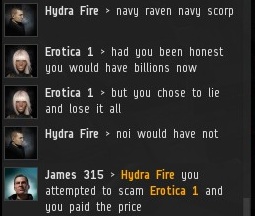 Just as we got to the bottom of one of Hydra's lies, another lie popped up in its place. I was heartbroken. Was this the same guy that I had spent over an hour chatting with on the internet? Did I ever really know him at all?

I began digging through Hydra's EVEmails using the full API he had submitted to us at the beginning of the bonus game. I was shocked by what I found. In April, he was expelled from his old corp. flashelyria explained:

So Hydra was kicked from his corp because he wanted to become a pirate. But there was more. When he joined a new corp, he asked his CEO to reconsider one of their policies... 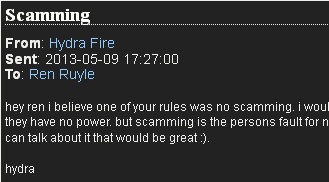 Hydra's EVEmail to the CEO read:


"hey ren i believe one of your rules was no scamming. i would like to ask that that rule be revoked. podding i understand because they have no power. but scamming is the persons fault for not looking. im only talking about under 300 mill isk. but anyways if we can talk about it that would be great :)."

So Hydra was a scammer all along. He attempted to cheat Erotica's bonus game by lying and not putting total faith in her. Who knows how many others he scammed or attempted to scam before all this took place?

I was left with more questions than answers. Did Hydra really have a store of expensive assets squirreled away on an alt? And was there anything he could do to convince Erotica to return his assets and award the 25 billion isk bonus prize?

To be continued...
Posted by MinerBumping at 19:23