Rage of the Russian Renegade, Part 6

Previously, on MinerBumping... Rebel miner Mirion Renegade's petition against me got him nowhere, so he invited me to a private convo and made his case. He insisted that he was too poor to pay the 10 million isk mining fee, and that he had been abandoned by his Russian comrades. 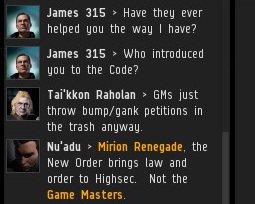 Mirion toyed with the idea of filing another complaint, but the Agents I invited to join the convo convinced him it was futile.

I'm nothing if not merciful. Because Mirion had so little money, I offered to double any isk he sent me. I don't normally do this, but I wanted to show him that the New Order rewards trust, always.

Mirion sent me the oddly-specific amount of 638,131.00 isk, claiming it was all that he had left. I got out my calculator and prepared to send back double the amount.

...Until I remembered that Mirion had previously sent me a screenshot of his wallet. It clearly showed that he had 3.6 million isk. Mirion had told a vicious lie. 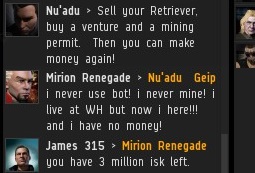 Mirion repeated his claim that he had no isk left. I don't know why it is that people keep trying to scam money out of honest isk doublers. 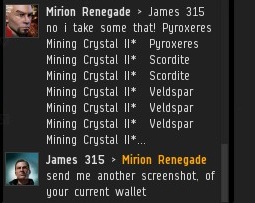 The backpedaling began. His excuse was that between the time of the screenshot and the time he claimed bankruptcy, he had spent the missing isk on a bunch of mining equipment. I demanded proof. You know the old Russian proverb: "Trust, but verify." 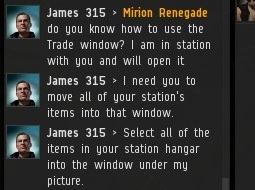 Since Mirion was docked up, I decided to join him in the station, so we could settle things. 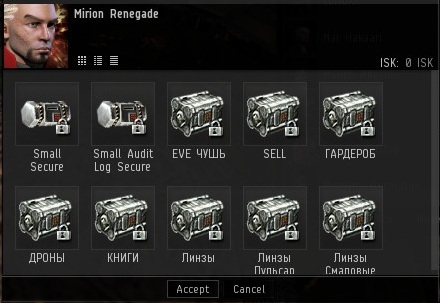 I told Mirion to put all of his assets into the trade window. Without any further explanation provided or asked for, Mirion complied. 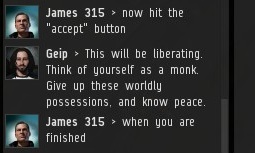 The next step in the process was for Mirion to give me all of the items for free.

Unfortunately, Mirion got cold feet at the last moment.

Mirion Renegade > Do you hear what? ahuyel?

Mirion Renegade > hanging up on me lawsuits schmuck!!!! 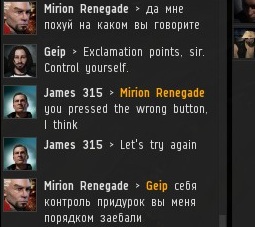 We were so close to making progress, but now we were back at square one.

Mirion Renegade > yeah fuck me in what you say

Mirion Renegade > Geip assume control of a moron you order me 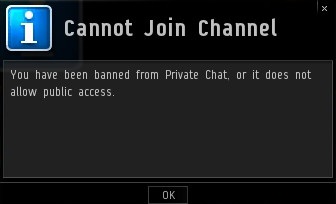 Mirion booted me from the private convo. Just before I was kicked out, my chat logged the following line that Mirion typed (in English):

Mirion Renegade > Geip how i may control my self if u wanna take all waht i have?

Though we weren't able to save Mirion from himself that day, I was very proud of the work that my Agents and I did. We made every effort to help Mirion evolve beyond his obsession with highsec isk and join the New Order family. Progress doesn't always manifest itself in a smooth, upward trajectory. There are usually setbacks and false starts. I'll never stop trying to save highsec. It's worth fighting for.
Posted by MinerBumping at 02:07