Sins of a Solar Spymaster, Part 4

Previously, on MinerBumping... Ledrian Saisima outed himself as a spy after donating hundreds of millions of isk to the New Order. He explained that it was all part of his master plan to help the New Order take over all EVE by killing lowsec miners with a Drake. 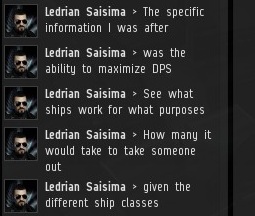 Ledrian revealed that he hadn't been after our "schedules". Instead, he gathered intel about maximizing DPS and how many ships were needed to kill people.

Astute observers may be aware of the Gank page on this very website, which links to publicly-available posts on such topics. 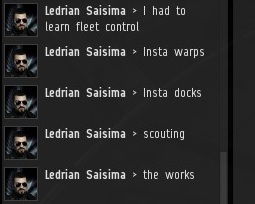 Again... The Gank page. Some people get their info the easy way, some the hard way. 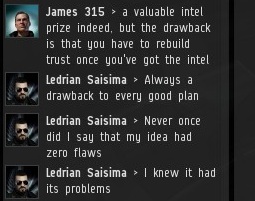 Ledrian understood that his spycraft came at a price. New Order Agents had become suspicious of Ledrian ever since he told them that he was a spy. 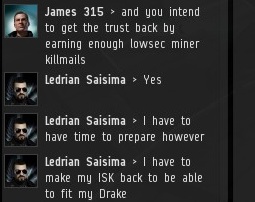 Armed with all of that information on how to properly gank miners in highsec, Ledrian was able to put together a good Drake fitting for ganking miners in lowsec. 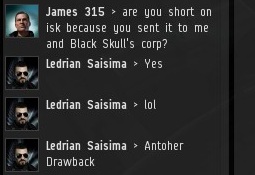 Unfortunately, Ledrian's isk reserves were all but tapped out. Gaining the trust needed to infiltrate the New Order had been very expensive. 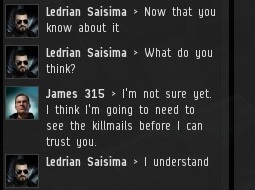 Having spelled out his master plan, Ledrian was eager to hear what I thought of it. I told him I would reserve judgment until he supplied the promised killmails of lowsec miners. 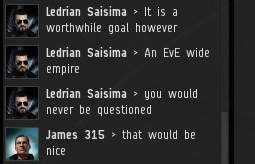 Putting Ledrian's plan into motion came at great personal cost to himself. But he was driven by the ambition to help me take over the whole EVE galaxy. At least his motives were pure. 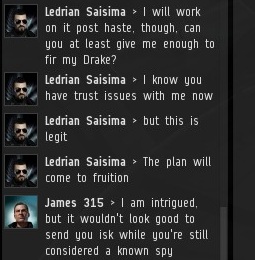 In the meantime, Ledrian hoped I could loan him funds for his anti-miner Drake. I politely declined, citing his "burned spy" status. Imagine the scandal if New Order funds were diverted to a rogue black ops operation. 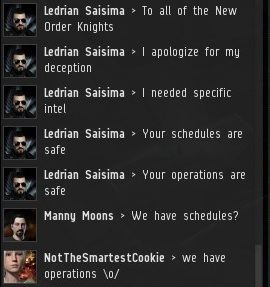 Since I had not yet banned him from New Order HQ, Ledrian returned to the channel and came clean. It was nothing personal. Ledrian vowed not to use any of the intel against us. 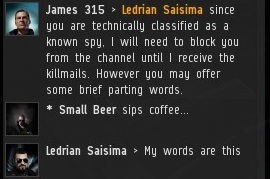 Before his expulsion became official, Ledrian was given the opportunity to deliver a final message directly to my Agents. 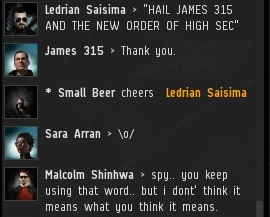 Playing to the audience, Ledrian declared his fealty to me and the New Order. Always a crowd-pleaser. 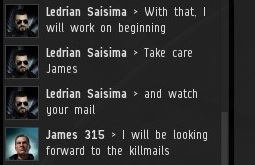 Now it was time for Ledrian to unleash himself upon an unsuspecting lowsec--after he grinded some isk for his Drake, that is. But would Ledrian succeed in helping the New Order take over EVE? Or would Ledrian's master plan, years in the making, unravel before his very eyes?