Previously, on MinerBumping... Hydra Fire had a chance to win 25 billion isk from Erotica 1. Hydra followed the rules by contracting me all of his in-game assets, but forfeited everything by lying to Erotica. He claimed to have secreted assets away on his alt, Fire Catalyst, but this turned out to be another lie. In a last-ditch effort at redeeming himself, Hydra invoked the Supreme Protector's Questions Three.

The atmosphere became remarkably tense once the Questions began. All of Hydra's assets were in my possession. If he answered each question correctly, he would win all of his assets back, and would be awarded 25 billion isk. Hydra's future in EVE would be determined in the next few moments.

A tremendous sense of relief must have washed over the onlookers in Erotica's bonus channel. I asked the most commonly-used question. It has been featured in five previous MinerBumping blog posts.

...But Hydra somehow managed to muff the question anyway. 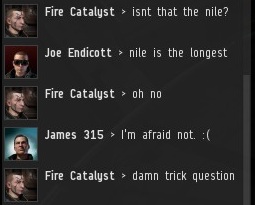 Like so many others before him, Hydra incorrectly guessed that the Nile was the largest river in the world. It was a huge disappointment to everyone.

Despite the many betrayals he had committed, I felt sorry for Hydra. I love handing out prizes, and I wanted to see a great redemption story. But the rules are the rules. 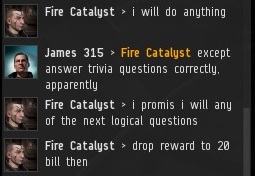 Hydra went back into "bargaining" mode. With no in-game assets to speak of, he was desperate. He had come so close to becoming a rich EVE player, but instead had to start again from scratch.

Erotica and I had already given Hydra so many chances. He couldn't ask for any more breaks. But it's not for no reason that my name is synonymous with mercy. 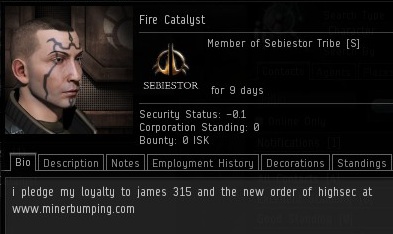 Hydra agreed to put a pledge of loyalty on his character's bio in exchange for another crack at the Questions. He was willing to put it on Hydra Fire's bio as well, but I didn't want him to have to go through the hassle of re-logging on his main. Again, mercy. 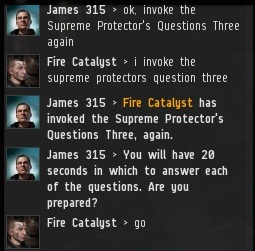 Hydra was more confident this time. Having been given so many chances to redeem himself, perhaps it was his destiny.

Maybe there was something to this "destiny" thing, because Hydra had another extraodinary stroke of luck: I asked the same question that had been featured in a MinerBumping post earlier that month. 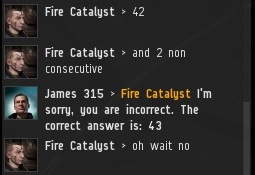 Hydra took all of the 20 seconds to type out his answer. In a horrifying twist, he answered incorrectly. Hydra was crestfallen. 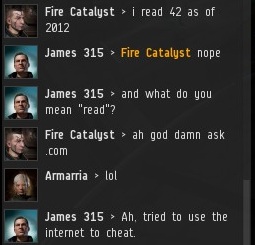 It was all over for Hydra. With nothing left to lose, he confessed that he used the generous 20-second time allotment to try looking up the answer on the internet. 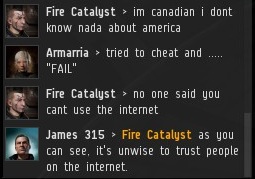 Hydra appears to have found this Yahoo! Answers page via Ask.com. Unfortunately, the page predated Barack Obama's presidency. It is unwise to take shortcuts in this life; Hydra was taught a valuable lesson. Hence the whole "Test of Wisdom" thing. 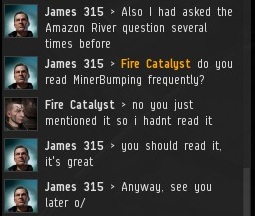 That was it for Hydra. Though I mentioned my blog earlier that day, he hadn't read it yet. This is a mistake. EVE players should always read my blog--you never know when it might come in handy.

I requisitioned Hydra's forfeited assets for use in future New Order activities. We stayed on "good" terms, possibly because Hydra was still hoping to get his stuff back.

Hydra and Erotica remained in contact. Though Hydra's attitude about Erotica was subject to dramatic shifts, he did at least admit that he was guilty of deceit. This is proper, and Hydra is better off for saying it. But it is a far, far better thing to act with honour and integrity in the first place--especially if you want to double your isk.
Posted by MinerBumping at 18:04

Email ThisBlogThis!Share to TwitterShare to FacebookShare to Pinterest
Labels: Field Report, The Code