Over the past year, MinerBumping has occasionally been threatened with DDoS attacks. We're still here. Maybe CCP could use a bit of our standard-issue New Order Invincibility. In the meantime, let's celebrate some ganks that took place during the week of May 26th @ 00:00 EVEtime through June 1st @ 23:59 EVEtime. 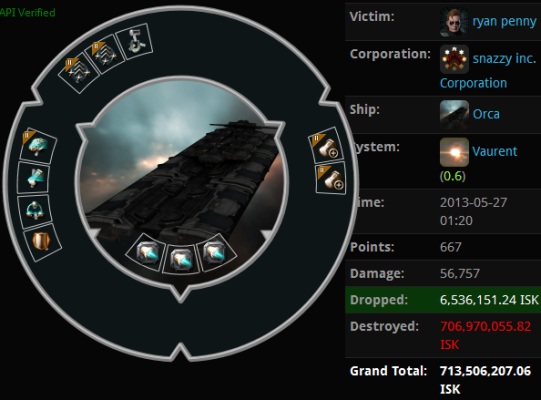 First up, ryan penny's Orca. (I've used the zKillboard graphics, as the Eve-Kill ones are on the fritz due to the EVE server outage.) Agents Capt Starfox, xxBLACK SKULLxx 929, Blue Suntun, Manny Moons, Dante Lobos, John E Normus, Ailish Liu, and D400 penalized the carebear for mining without a license. It goes without saying that ryan was a bot-aspirant; his 1.18 billion isk pod was still sitting there 12 minutes later when it got popped.

That same day, three other offending Orcas were roasted by our Knights: Morrianne Grazor, Sentinel 912, and Mur Maider. They all failed to heed the New Order, and they all paid the price. In addition to the Agents listed above, Agents Fawn Tailor, Sir Mack Inawrex, R0me0 Charl1e, Lenda Shinhwa, Guybertini, xX1337MastaXx, NotTheSmartestCookie, Dr Tyler, and Leeza Del assisted on these kills. 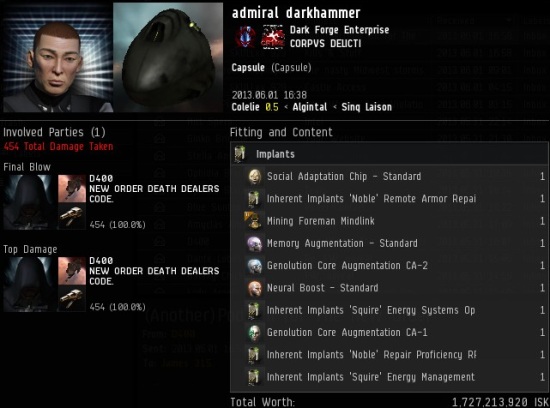 It was another competitive week for podkills. admiral darkhammer's pod, worth over 1.7 billion isk, topped them all. He was killed by Agent D400 while--incredibly--auto-piloting. For all of you carebears out there who fill your pods with expensive implants, please remember that the only thing that stands between you and what you deserve is an Agent of the New Order with a cheap destroyer and iron will. 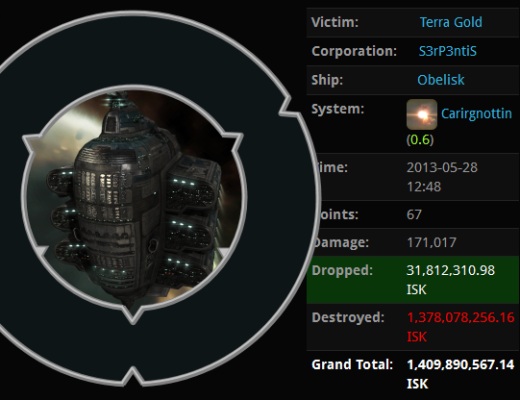 The cheesy suicide gank of the week is Terra Gold's Obelisk freighter, worth 1.4 billion isk. I say it's a cheesy suicide gank because of the circumstances: Agents GloVine and SexyVanillaFreshness were awoxing the freighter, and they invited Agent xxBLACK SKULLxx 929 (not in the corp) to join in. He brought his Catalyst to the party and assisted in the kill with a suicide attack. Unnecessary, but very sweet. 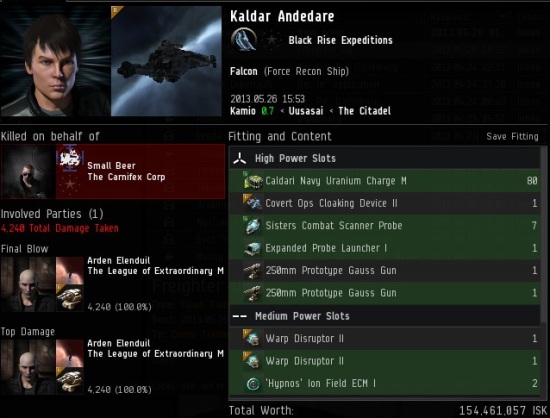 Though not technically a suicide gank, Kaldar Andedare lost his anti-Order Falcon because he forgot Agent Small Beer had kill rights on him. These rights were assigned to Agent Arden Elenduil, who promptly blapped him into oblivion with a Tornado. But this was only a prelude to Arden's Tornado antics a few days later, which would bring down a much more impressive bird: 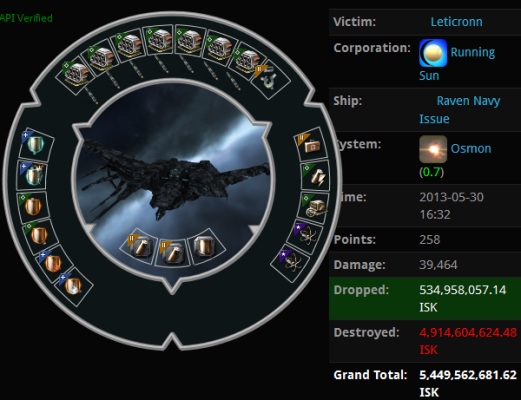 Leticronn's Raven Navy Issue, worth 5 and a half billion isk, is a marvelous example of bot-aspirancy. He was willing to spend everything he had on this monstrous mission-running ship, but wouldn't set aside even 10 million isk to pay homage to the ruler of highsec. Astoundingly, he couldn't even spare a few nice words about me in his bio, which is totally free to do. You can guess what happened next.

Agents Arden Elenduil, Zkanu, popblues420420, Fen Haroun, Tah'ris Khlador, James Everett, Amyclas Amatin, and Perseus Parker consulted with each other and determined that Leticronn represented a clear and present danger to highsec, his extravagant vessel an open declaration of indifference to the Code. They judged him guilty and decided to kill him--a call any Agent worth his salt would make. So they dropped by with a gang of Tornadoes (and one Thrasher) to blap the Raven and his 840 million isk pod. At this rate, we may need to put the Loot Fairy on the Red Pen list, though. The drop was absurd: There were 9 mid/lowslot modules worth 100 million or more, and only one of them dropped. You'd get better odds from Somer Blink!
Posted by MinerBumping at 19:28