Saviour's Choice: The Top 15 MinerBumping Posts of Year One, Part 2

In honour of the first anniversary of the New Order, we're counting down the top 15 MinerBumping posts. Click here for #15-#11. 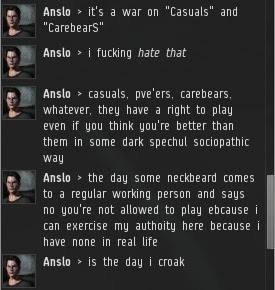 Remember the "Proveldtariat"? If you're new you probably don't, which should give you a hint as to its effectiveness and staying power. But of all the anti-Order resistance movements, it may have been my favorite. Founded by concerned forum poster Anslo, the Proveldtariat movement was the first rebel organization with its own blog. But Anslo soon discovered that it's far more difficult to rally a bunch of misfit underdogs into a disciplined fighting force than a Disney sports movie might suggest--especially if the miners are AFK. 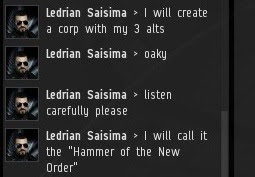 I love it when the enemies of the New Order do something that surprises me. When I convo'ed a self-proclaimed spy and asked him what his intentions were, Ledrian Saisima's explanation provided one of the most extraordinary "out of left field" moments of all time. Emergent gameplay is what makes EVE great, even when people are really bad at it. 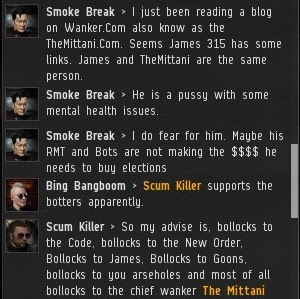 You know you're in for a treat when a corporation's description consists entirely of an angry rant about the New Order. To The Stars corporation did not disappoint. The two-parter offered some good ol' fashioned MinerBumping meat and potatoes: Tears, senseless profanity, threats of revenge, and conspiracy theories. 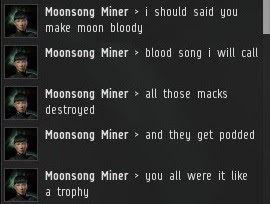 What can you say about Moonsong Miner? She was a truly unique presence in the highsec ice fields. If MinerBumping were a reality show, this post would be our introduction to "America's Sweetheart". Her strange blend of rage and softness, mixed in with poetically-broken English, charmed us all. 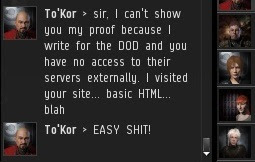 As any '80s sitcom will attest, misunderstandings between people can lead to wonderful comedic moments. To'Kor flew into a rage after I bumped him and proclaimed the superiority of my Code. You see, To'Kor is a programmer for the U.S. Department of Defense, and he believes his own coding skills cannot be matched. I only wish every carebear worked for an IT department, because I love seeing how many of them think it impresses people. Luckily, we got a chance to follow-up with To'Kor weeks later, when I bumped into him in another system.

To be concluded...
Posted by MinerBumping at 18:43