Sins of a Solar Spymaster, Part 2

Previously, on MinerBumping... The New Order was shocked when Ledrian Saisima, who had given us 220 million isk, suddenly revealed that he was a spy. I contacted Ledrian and demanded an explanation. Ledrian informed me that he had been on a one-man infiltration mission the whole time, gathering valuable intel on us. I asked him what the intel could possibly be. 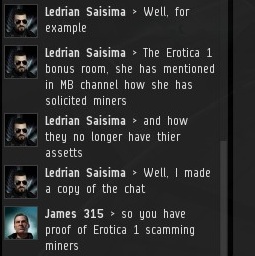 Ledrian claimed to have documents supporting his explosive claim that respected Jita isk-doubler Erotica 1 was actually a scammer. He conceded that his own intel-gathering was likely insufficient to bring down someone as highly-regarded as Erotica. But this was only the tip of the iceberg.

...Or it was the entire iceberg. Still, Ledrian was confident that he could cripple the New Order's isk-doubling backbone at a stroke. If he wanted to. However, during his time as a false Agent, Ledrian had come to realize that he had mixed feelings about the New Order. There was much he admired about it. This kind of thing often happens to spies on long-term assignments. Had his cover identity begun to bleed into his true personality? 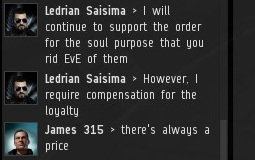 Ledrian's own hatred of the bots made him sympathetic to our cause. To that extent, at least, he wanted to help. Ledrian had gone from trusted shareholder of the New Order, to dangerous self-confessed spy, to aspiring partner of the New Order--all in a matter of minutes. He admitted that his minutes-old betrayal might hamper his efforts to build a relationship with the New Order. But Ledrian had big plans. I was eager to hear them. 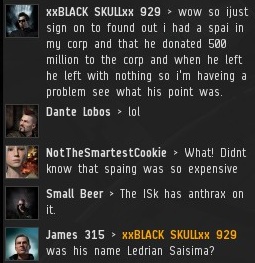 Meanwhile, at New Order HQ, Agent xxBLACK SKULLxx 929 dropped a bombshell: His corporation had been infiltrated by a saboteur who had given him 500 million isk and abruptly dropped corp. 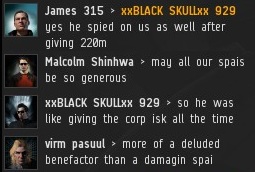 The corporation in question was Laughing Devils, a corp used by xxBLACK's alt and a few of his friends. They had no idea what Ledrian was up to, aside from giving them isk. I confronted Ledrian with XXBLACK's accusation. He immediately confessed to having masterminded the infiltration/funding of Laughing Devils corp. 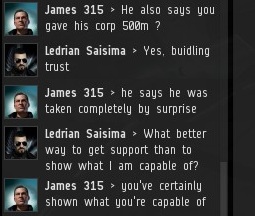 Now that Ledrian had established his credentials as a master spy, he could pitch his business idea to me. 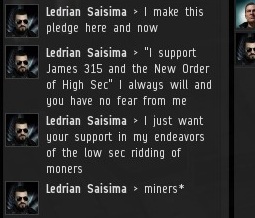 He explained that he intended to expand the New Order of Highsec by invading lowsec and attacking all the miners there. 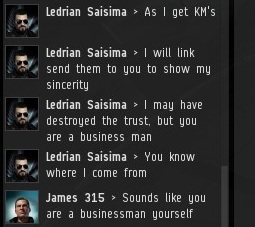 By presenting me with lowsec miner killmails, he would restore the trust that had been lost earlier that day when he had revealed his treachery.

Ledrian would personally form the tip of the New Order spear in lowsec, while I would continue to manage affairs in highsec. Back at New Order HQ, our Agents received the news with puzzlement. They were still trying to untangle the mystery behind Ledrian's spying on the New Order and Laughing Devils corp. We bumpers and gankers are warriors. We're used to open combat and honourable PvP, so all of this cloak-and-dagger stuff was confusing. But as I was about to discover, when it comes to the dark arts of espionage, there's always another layer of secrets and lies hidden underneath.

To be continued...
Posted by MinerBumping at 18:24