My dear readers, savor these moments that we have together. Savor them. 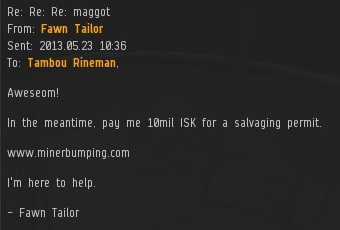 Agent Fawn Tailor is something of a pioneer. Though MinerBumping and the New Order focus primarily on highsec miners, Fawn has taken great strides toward improving the state of the highsec salvaging community.

Tambou Rineman lost a quarter of a billion isk when Fawn ganked his Noctis. Tambou took exception to this treatment, but as far as I can see, everything was on the up and up.

Tambou threatened to wipe out the New Order. A pop quiz for all aspiring Agents of the New Order: How would you respond to such impudence?

If your answer was "with class and dignity", then you just might have what it takes to join the New Order. 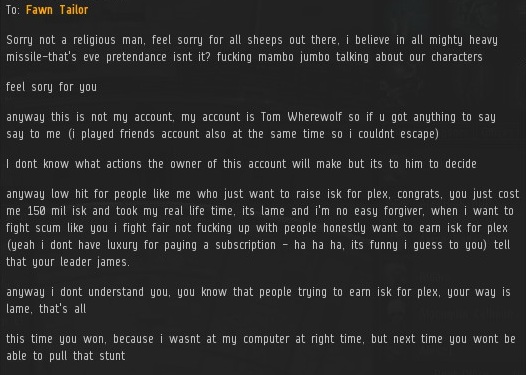 After Fawn Tailor raised Tambou's awareness of the Code, Tambou was shocked to see a bounty notification in his inbox. Zkanu had placed a sum of isk on Tambou's head, reducing him to a highsec criminal from the carebear perspective. Unaware of Zkanu's status as an Agent, Tambou demanded an explanation.

Zkanu proudly declared the opening of the New Order Bounty Office. Zkanu's mission: To motivate highsec residents to be their best. 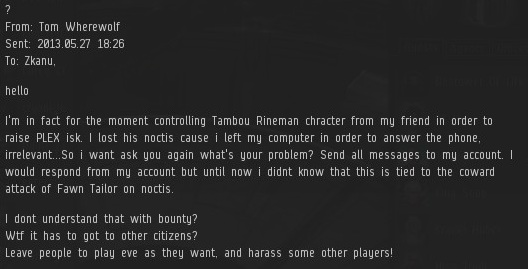 Zkanu received a reply from Tom Wherewolf. In a single sentence, Tom admitted to account sharing and AFK salvaging. This more than justified the execution of his Noctis--no wonder Fawn Tailor's "spidey sense" tingled! Tom concluded by asking Zkanu to "Leave people to play eve as they want, and harass some other players!" Isn't that a contradiction? 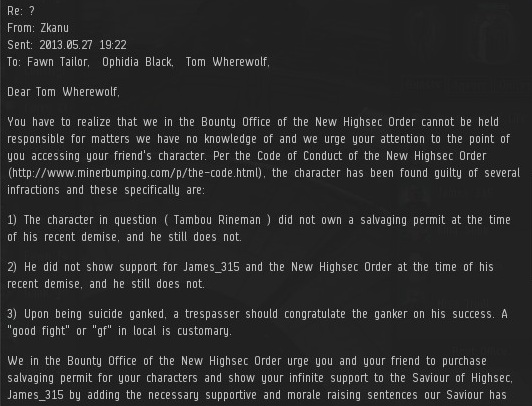 Another class act in the New Order, Zkanu took time from his busy day to provide Tom with instructions on how he could assist his friend in complying with the Code. I'm convinced that any one of our Agents could walk up to an embassy and instantly be qualified to serve as an ambassador.

Tom's Internet Tough Guy Syndrome was cracking. Should he receive another bounty notification, he vowed to get CCP involved. Zkanu considered the threat and responded by modestly increasing the size of Tom's bounty.

Thus was born another petition. It makes me a little sad, though, to realize that some highsec carebears think bounties are forbidden by the EULA. Think of all the time and effort CCP put into creating the revamped bounty system last year!
Posted by MinerBumping at 17:44