Sins of a Solar Spymaster, Part 3

Previously, on MinerBumping... The New Order was stunned when Ledrian Saisima revealed himself as a spy after buying 220 million worth of shares and contributing 500 million to another Agent of the New Order's corp. Hoping to find answers, I initiated a private convo with Ledrian. He explained that his espionage was merely a way to get my attention and propose a daring new plan of action. 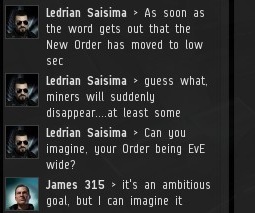 Ledrian was more ambitious than anyone realized. He intended to help the New Order conquer the entire EVE galaxy, not just highsec. The centerpiece of his plan involved an attack against the lowsec miners. 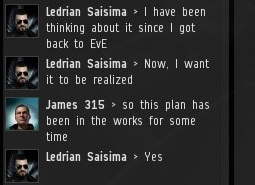 This wasn't some half-baked scheme. No, Ledrian had been baking it for an extended period. 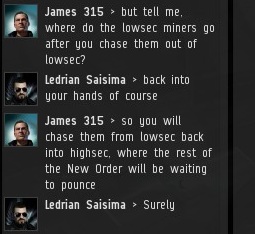 By driving the miners out of lowsec, they would have few alternatives but to return to highsec, which would already be securely in the grip of the New Order. 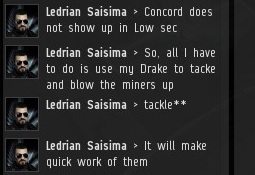 Ledrian was confident that the lowsec miners would be unable to withstand his powerful anti-exhumer Drake. So far, so good. But I wanted to see if there were any flaws in his master plan. 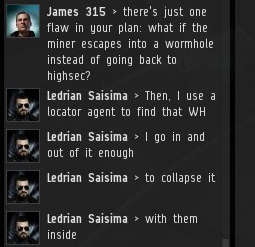 Ledrian's unorthodox use of locator agents to search out the wormholes was intriguing. Clearly he had thought of everything. 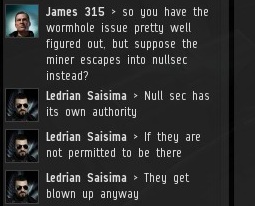 With highsec, lowsec, and wormsec all taken care of, we were almost ready to use Ledrian's Drake to take over EVE. But I was concerned about nullsec. 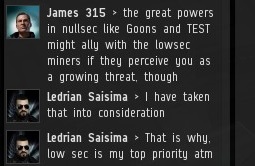 Ledrian admitted that the nullsec alliances might pose a problem. The key was to do enough damage to the lowsec miners before they could join forces with nullsec. 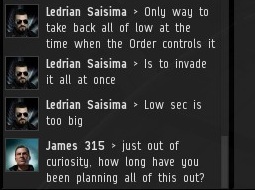 Once lowsec fell under our power, and with wormhole space crawling with Ledrian's locator agents, the nullsec alliances would find themselves surrounded.

This isn't the kind of thing you can plan out over a long weekend. Ledrian spent two years plotting and biding his time.

When he learned of the New Order, he moved quickly to seize the opportunity. 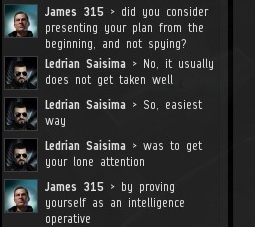 Ledrian knew he would have difficulty being taken seriously. To make the leap from unknown EVE player to galactic strategist, he would need to make a bold move. By infiltrating the New Order, he got himself on the Saviour of Highsec's radar. Now he was in a position of influence. Chaos is a ladder. 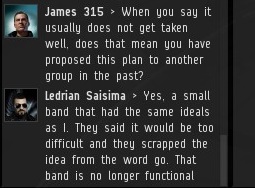 Years earlier, Ledrian tried playing by the rules, offering his plan to his own corp. But they lacked the ambition and vision to carry it through. 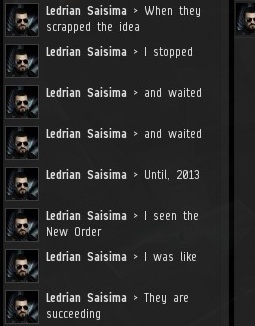 Ledrian's failure to convince his corp to take over the galaxy was a setback. He was down, but not out. From the shadows, he watched, and he waited. 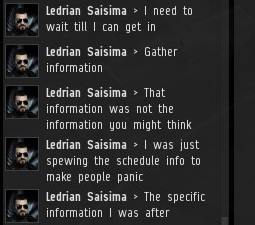 In the midst of his soliloquy, Ledrian dropped another bombshell. Contrary to his earlier claims, he wasn't interested in learning the "schedules" of the New Order's Agents. He had far more valuable intel to collect. But what was it?