Previously, on MinerBumping... Hydra Fire played a bonus game with isk-doubler Erotica 1. All he had to do was hand over all of his assets and tell the truth. But after being caught in several lies and forfeiting his assets, Hydra confessed to hiding faction battleships on an alt. 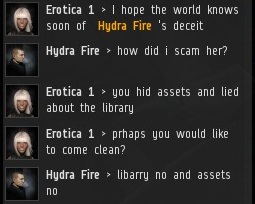 As the designated escrow agent, I held all of the assets Hydra had turned over. He was unrepentant about his lies. 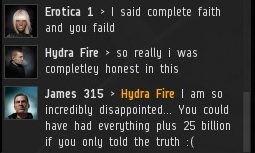 When Erotica placed it into a trade window, Hydra saw the 25 billion isk with his own eyes. But even that was not enough to keep him honest. His greed was insatiable. 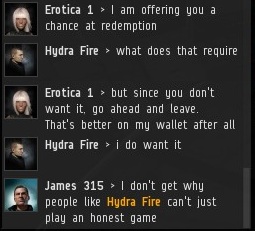 And yet, as everyone knows, Erotica has a big heart. She's a sucker for a redemption story. 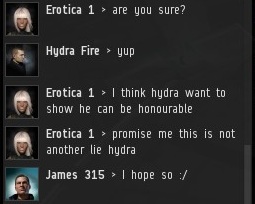 Hydra was eager to get his stuff back, so he said he was finished lying. 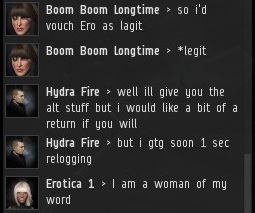 Hydra agreed to transfer all of the hidden assets from his alt. But had he really turned over a new leaf? As he relogged, he typed this into the TeamSpeak singing channel:

Hydra went to EVE-O and made a vicious post about Erotica:

WARNIG THIS IS A SCAM.

today i took erotica up on her bonus room. shehe asked me to give all i had. scince i saw this post i thought it was legit. in the end he/she made up a sad excuse saying that i lied. i told them i was in the library where i was whe i was i my houses library room. a

anyways dont trust eroctica she/he will take everything you own 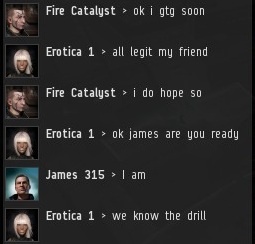 Despite the EVE-O post, Hydra was eager to take any lifeline that Erotica would extend. He rejoined us on his alt, Fire Catalyst. 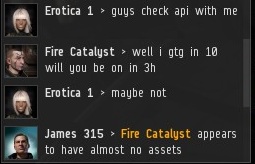 Hydra provided us a full API to his alt, so we could facilitate the transfer of all his assets. But the faction battleships were nowhere to be found. 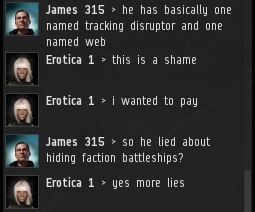 It was all a clever ruse. Hydra really had given us virtually all of his assets, and then lied about it. 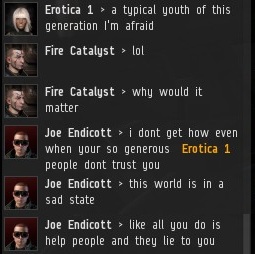 Other occupants of the bonus room, mostly silent until now, were stunned. Was there no end to Hydra's treachery? 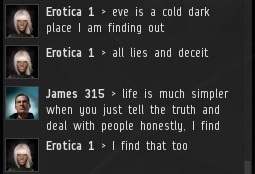 Hydra wounded us all deeply with his lies. He had seemed trustworthy. We were mistaken. Hydra's alt left the bonus room. 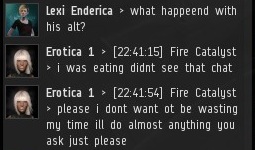 As we mourned the EVE community's loss of innocence, Hydra's alt invited Erotica to a private convo. He wanted another chance to redeem himself. 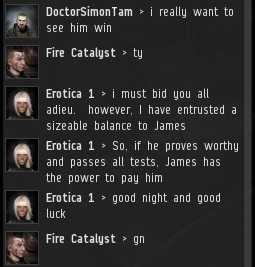 He rejoined us in the bonus room, but Erotica had important non-EVE business to take care of. I was authorized to do with Hydra as I saw fit. Now Hydra's fate rested in the hands of the Saviour of Highsec. 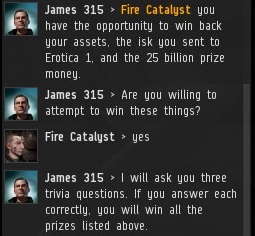 After careful consideration, I decided to offer Hydra a chance to take the Test of Wisdom. But rather than winning a free day of mining or a duel against my Invincible Stabber, the stakes would be raised. It was for all the marbles.

Hydra was just three questions away from winning it all. He seemed a little nervous, but that wouldn't stop him from going forward with it. He was ready for the fight of his life.