Saviour's Choice: The Top 15 MinerBumping Posts of Year One, Part 1

As we continue to celebrate the birthday of the New Order, it's time to take a little trip down memory lane. Even in terms of EVE's history, the New Order hasn't been around for very long. MinerBumping.com has been around for even less time--it began in August 2012. But we've certainly been active. MinerBumping is already, by far, the largest repository of video game-related tears on the internet. The carebears are entirely to blame for this; they need to stop crying and get to work helping us save highsec. Until then, the tears will flow.

Every decent, honest person reads and appreciates MinerBumping. As we savor our shared experiences, I'd say it's about time for one of those countdown lists everyone on the internet loves so much. As with all "Top #" lists, there's plenty of room for debate and disagreement. Everyone has their own 15 favorite MinerBumping posts. There are differences of taste, nostalgia, and novelty. Today I begin the countdown for my own top 15. If you just joined us recently, consider this an opportunity to get acquainted with some of the story arcs from earlier in our history. 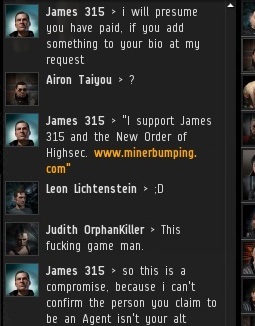 It's light on tears, but it's also one of the most significant posts in MinerBumping history. For the first time, I requested that a miner prove his loyalty to me--and prove that he already paid another Agent--by putting a pledge in his bio. It was just a spur-of-the-moment fix, but it changed the way thousands of highsec miners use their bio. Airon Taiyou became a trend-setting miner, with the specific language of his "bumper sticker" being copied and adapted across empire space. It also changed the way Agents do business; it's not as important to go rifling through an official list of paying miners. 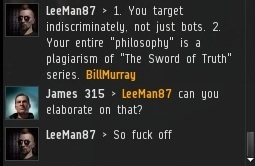 Highsec miners are very similar to one another in a lot of ways. So similar, in fact, that Miner Bingo was created to mock them for their lack of creativity. But no matter how long the New Order went across highsec bumping miners, there was always some new way the carebears could provide us with tears. LeeMan87 proved that when he leveled one of the most mind-blowingly bizarre complaints against the New Order that I've ever seen: We're plagiarizing the "Sword of Truth" series, a collection of fantasy-themed novels he had read. Naturally, my Agents and I were eager to hear more about LeeMan87's theory. 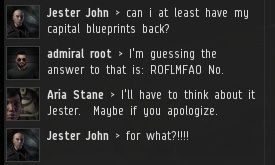 The New Order has touched so many lives. It has also won a lot of hearts and minds. One of the highsec residents who blossomed under the influence of the Order was Aria Stane, the CEO of an industrial corporation. She decided to take a stand in favor of the Code and told all of her corp's miners that they were required to convert. Jester John didn't like that, so Aria took swift action against him. Spreading her wings further, Aria eventually used an alt to create the CODE. alliance, home to many New Order Agents. 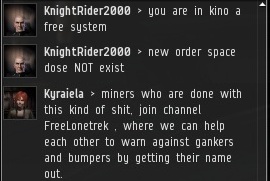 It's a little tricky to do a countdown like this when there are a lot of multi-part posts, so the rule is that a two-parter can count as one post, while longer series' posts will be treated individually. In this two-parter, we got our first look inside one of the many so-called "resistance" movements that sprouted up in response to the New Order. A daring Agent infiltrated a restricted channel in which the anti-Order miners complained and schemed against us in the most hapless fashion imaginable. Tear-filled chatlog intercepts? Check. Suicide Caracals? Check. 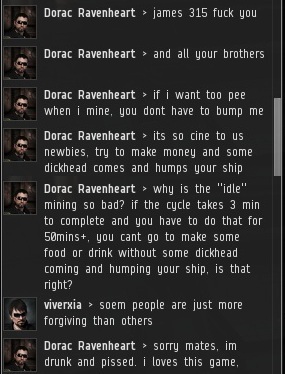 Ah, yes. Of all the provisions in the Code, perhaps the most controversial--and the most misunderstood--is the one that allows miners to use the restroom if they get my permission first. Actually, it's not in the Code, but originally came from an early MinerBumping post in which I defined AFK mining. A miner is considered AFK if he's unable to respond to me in local within a reasonable amount of time (5 seconds or less). If for any reason a miner feels he can't follow that rule, he should dock up. But out of mercy, I offer exceptions to the rule, giving them the ability to take bathroom breaks under certain conditions. Did the rebel miners praise me for this? No, they actually took it as a restriction of their bodily fluids. Thank goodness there are Agents who are educated in the Code sufficiently to guide these lost souls and help them understand the rules.

To be continued...
Posted by MinerBumping at 22:52