They say charity begins at home. That's certainly the case in EVE, where players are allowed to shoot their fellow corp members in highsec without Concord interference. It's a great tool for holding others accountable to the Code. You have a conscience for a reason. If you see anyone in your corp doing something that makes you feel uncomfortable--mining without a license, showing insufficient loyalty to the New Order, etc.--you are well within your rights to destroy him or her.

Agent Haedonism Bot is a model of corporate responsibility. As he wrote on his blog, he has created a safe space for Code-compliant miners. But if a miner joins the corp hoping to get away with murder, they've got another thing coming:


"Our ongoing efforts to reform our corporation, to transform it from a bloodthirsty pirate gang to a humble highsec mining corporation, have continued despite many unforeseen challenges. As of the time of this post, we still do not have any members who actually mine. We have recruited a number of miners, but to my shock and dismay, not one of them has turned out to operate according to the New Halaima Code of Conduct."

Sadly, Haedonism has been forced to kill new recruits to his own corporation. Case in point, ANZQ, who had only just joined the corp: 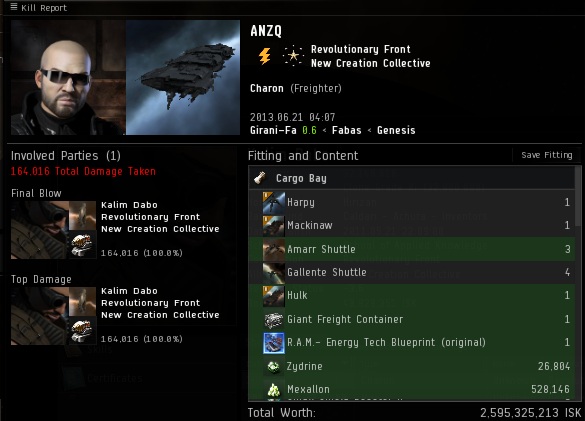 "This miscreant was supposed to be the shining hope of our alliance to expand into the Australian timezone. He is a well experienced and highly skilled miner/industrialist who flies exhumers, Orcas, and freighters, and had an extensive collection of BPOs in his possession. Fortunately, our corporate police officer, none other than my alt Kalim Dabo, caught wind of his intentions to mine without a permit in our home system, and was able to intercept him en route and confiscate/destroy his mining equipment and illicit BPO library, as well as, apparently, all of the rest of his possessions."

Haedonism performs what is called the "reverse awox". But you don't need to run a corporation to serve justice on your fellow members. Everyone in EVE has the authority to act in the name of the Code against their corpmates, even if your application was accepted five minutes ago.

Agent Lord Mandelor notified me of a victory against Cutie Mark Crusaders Militant Coalition, which had been infiltrated by a courageous Agent of the Order.

Does Cutie Mark Crusaders Militant Coalition (ticker "PONEH") sounds familiar? It's the home of bronies who rebel against the Code.

In a reply to a MinerBumping post about our Agents' activities in Ikao, one such brony threatened to petition any future awoxings.

Now it seems other members of the corp, including Botten Miromme, are angry at the New Order. They miss their Orca. 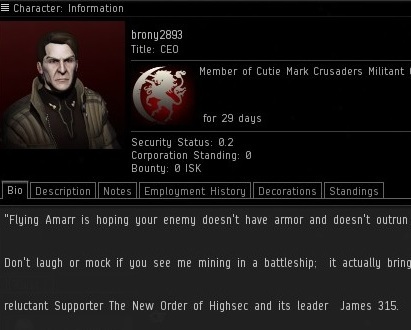 But you'll recall that the controversy began with brony2893, who was caught faking ownership of a mining license.

Recently someone took action against the brony corp, and brony2893 himself sent me an EVEmail expressing his displeasure. As soon as he told me that he was being sarcastic about honour, I knew I was dealing with one rude dude.

Although I'm not sure exactly what he meant by that line, it was clear that brony2893 was in the process of self-transformation: 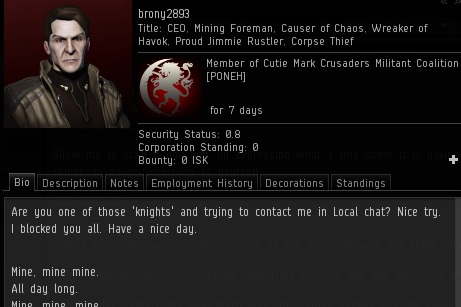 Gone was the badge of "reluctant support" for me in his bio. Now he styled himself a take-no-prisoners leader in the rebellion against the New Order.

brony2893 was convinced that the entire New Order was out to get him--all because he "verbally skinned [my] butt".

(Though I have not yet interacted with brony2893, the above is a screencap of the verbal skinning he seems to have been referring to.)

...and the EVEmail continued for several more paragraphs. I have to disagree with him on the definition of a "true man". It's open to philosophic debate, but I don't think being a true man entails mining in highsec and threatening to petition when your corp's Orca gets blown up.

Once more, brony2893 insisted that he alone is the target of all New Order operations. He also referred to "harassment outside of EVE". In truth, no Agent of the Order has ever harassed anyone outside of EVE--or inside of it, for that matter.

Through the course of running this blog, I've found that the surest way to make carebears complain of being misquoted or "falsified" is by quoting them verbatim.

In his parting words, brony2893 invited me (and by extension, everyone else in the New Order) to visit the Ikao system, where the brony corp is located. 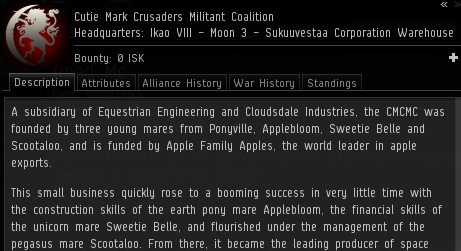 Despite his paranoia, I can understand why he might fear for the safety of Cutie Mark Crusaders Militant Coalition. They're a corp of 21 highsec carebears, all bronies, and their lax recruitment standards leave them vulnerable to awoxers and wardeccers alike. Still, I can't help but feel that their problems would be solved if they embraced the Code willingly. If they do not, perhaps their future will not be so bright.
Posted by MinerBumping at 20:16