The Rumble in Vattuolen, Part 1

Though I am in an exalted position in the EVE community, I stay in touch with the common man by touring my great empire. I often do this alone, without a bodyguard. That's how much confidence I have in my approval rating. 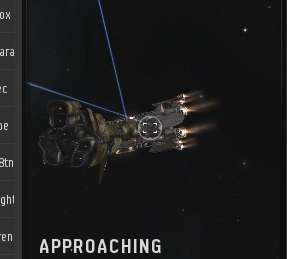 Hulks are nearing extinction. I came across one mining an ore belt in Vattuolen, and I was intrigued. Then I discovered that the miner in question didn't have a New Order mining license. Truly a dinosaur! 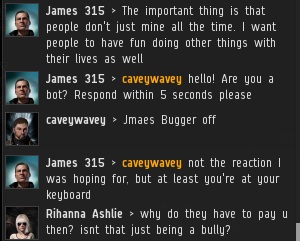 While engaging in a pleasant conversation with some curious miners, I was interrupted by the Hulk pilot, caveywavey. My bumping had disturbed his slumber, it seemed. 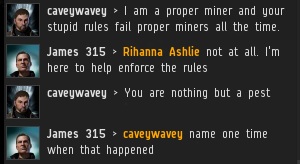 Actually, caveywavey had been following the local chatter, at least to some degree. He wasn't willing to budge from his prehistoric attitude about the Code. 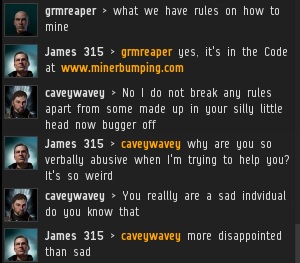 "Father of the New Order" is one of my official titles. But it's more than that. It's a way of illustrating my attitude toward the teeming masses of highsec miners. Parenting isn't always a pleasant experience, but the alternative--neglect--is unthinkable. 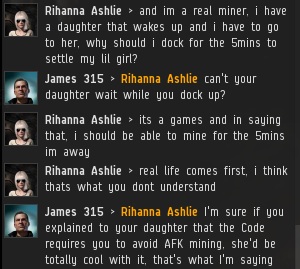 Though MinerBumping posts are edited to suggest linearity, there are usually multiple threads running parallel to each other. While I was busy dealing with caveywavey, Rihanna Ashlie seized the moment to question the Code. 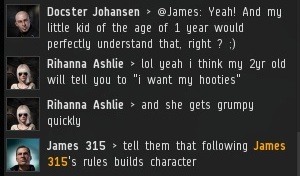 I've lost count of the number of times people have cited their parental responsibilities as an excuse to break the rules. Perhaps they forget that I have parental responsibilities of my own--to them. In any case, I think the miners underestimate the ability of their children to learn the importance of the Code. I suspect many of the little ones are more reasonable, in this regard, than their parents are. 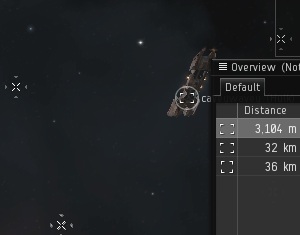 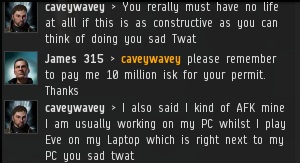 Once caveywavey had been bounced into deep space, he made his confession: He "kind of" AFK mines. 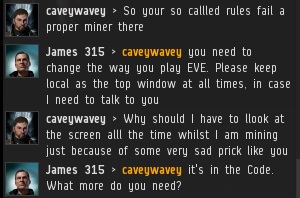 Emboldened by his fellow skeptics, caveywavey challenged my authority and that of the Code. It was preposterous. He wanted to know why someone playing a video game should need to look at the screen! 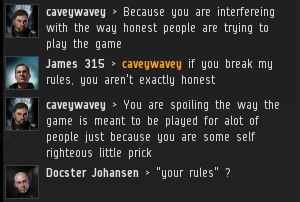 caveywavey made another damning admission: He felt that AFK mining in highsec was "the way that game is meant to be played". In his own words, he was guilty as sin.

If everyone was judged according to his own standards, everyone would be considered "good". The word would lose all meaning. That's why we need an objective, universal standard by which to measure everyone. 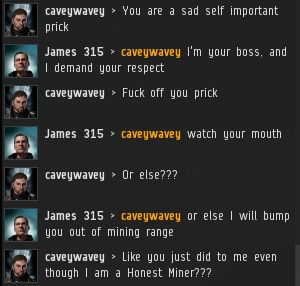 Despite the fact that I had bumped caveywavey and linked him to the Code several times, I wasn't making any progress. The danger of stalemate loomed. 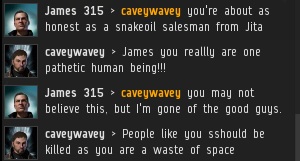 ...Or worse. Whenever a miner's greed for asteroids tempts him toward dark thoughts of murder, I always make an effort to steer him back on course: 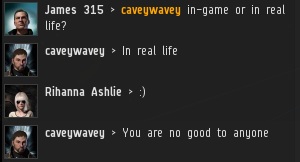 But it was too late. caveywavey was consumed by rage and avarice. The situation was spiraling out of control. Was it possible to bring caveywavey to his senses, or would he be lost to the New Order community forever?