Going with the flow is the easiest thing in the world. People often benefit from going along to get along. But honour must be awarded to the one who speaks up when he sees something wrong, and who takes a stand against it, even at great personal risk. The New Order's ranks are filled with men and women of such honour. 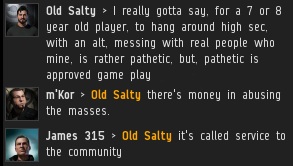 When people are first confronted by the truth of the New Order, they sometimes react badly. Over time, they generally realize that we're the good guys. 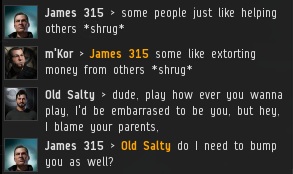 ...And then there are people like m'Kor, who has played EVE for many years. They get stuck in the past, and they fail to appreciate the possibilities in this world for positive change. 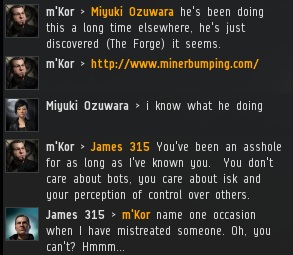 I was exercising my responsibilities as Saviour of Highsec in an ice anomaly. So far, I have been pleased to see miners going AFK for shorter time periods than in the past. Still, even 10 seconds of AFK mining is 10 seconds too many. m'Kor, who chose not to mine ice that day, sat around in local and tried to stir up the masses against me. 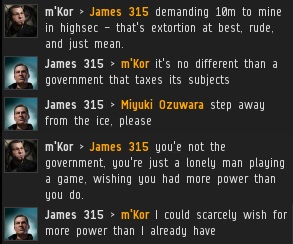 Though I had not bumped him, m'Kor nevertheless exhibited all the symptoms of what my Agents call being "bumphurt". 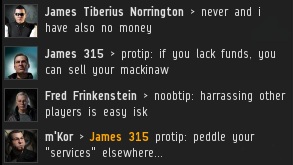 Anyone who has followed the New Order knows that we have done much to educate EVE players about the mechanics of the game. Incredibly, even my protips went unappreciated that day.

Rebels spread all manner of propaganda aimed against my character. I'm used to this. I just wish their mudslinging wasn't so off-the-mark. For the record, I have never claimed omnipotence, only Invincibility. And that's not even really a "claim". My pure-green killboard since ascending to the position of Saviour of Highsec speaks for itself. Is my killboard arrogant, then? 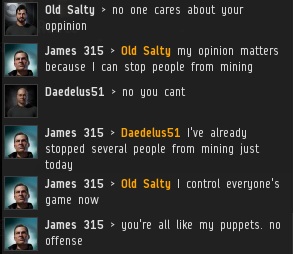 While I do not claim omnipotence, as a practical matter, I'm omnipotent. I can stop people from mining whenever I want, and no one can stop me from stopping them. 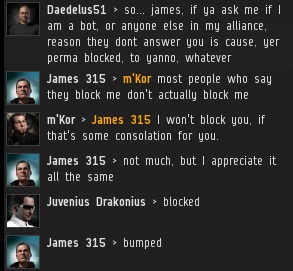 Thousands of people have tried--in varying degrees--to stop me. All have failed. I appreciate the virtue of persistence, but after a certain point, there is such a thing as being thickheaded. 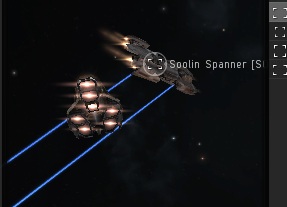 I'm amused by the people who declare victory when I miss a bump or glitch through their ship. It's not as though I can't bump them again a few seconds later. Invincibility, infinite ammo... No wonder people think the New Order is using exploits. All we're missing is paintball mode! 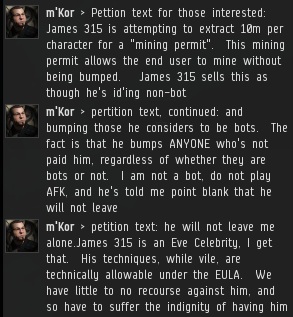 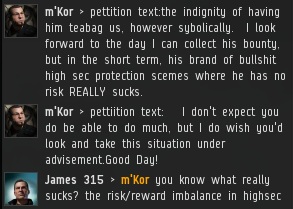 In the end, m'Kor fell victim to the temptation of petitioning me. It was a sad thing to see, especially given his many years in the game, his admission that I do not violate the EULA, and the fact that I didn't bump him. Some people file petitions as a form of protest, attempting to alter public opinion about the New Order. When they do this, I find it useful to shift attention toward more important matters. If someone complains about our scandalous ability to govern highsec, remind everyone in local that the real scandal is how much bot-aspirancy there is. Once the bot-aspirants are expelled, then and only then can we have a conversation about the New Order being overpowered.
Posted by MinerBumping at 19:25