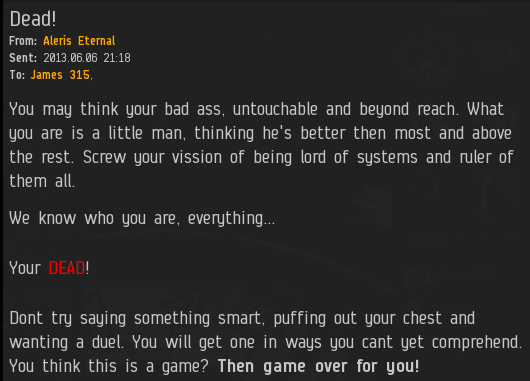 Aleris Eternal knows who I am, as you should you: I'm the Saviour of Highsec. And you should know what this is, too: Another edition of the Highsec Miner Grab Bag!

Remember when CCP got DDoS'ed? Well, the angry carebear detective squad is on the case. They're convinced that it was the New Order trying to ruin things for the highsec miners.

Despite Hydra Fire's promising apology to Erotica 1 in the final chapter of the Hydra Fire Saga, it seems he's still spreading his lies. You know what they say: Once a scammer, always a scammer. (Your humble author excluded, of course.) 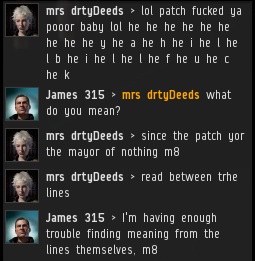 Way back in October, I addressed the carebears' claims that the Retribution expansion would destroy the New Order. mrs drtyDeeds is keeping the tradition alive, and thinks Odyssey did away with us. 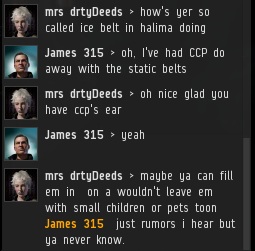 I'm not sure what drtyDeeds is saying, but I'll happily take credit for the fact that CCP made highsec ice less AFK'able. Who else but the New Order was leading the charge on that front? Of course, we've still got a long way to go. A miner who violates even 1% of the Code is still a bot-aspirant by any standard. 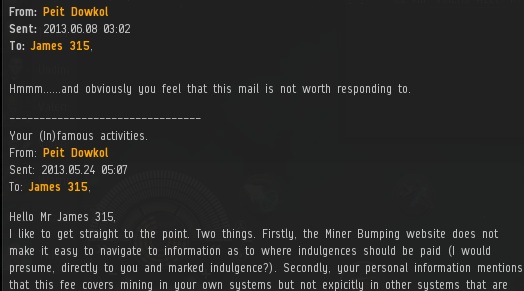 Peit Dowkol apparently wrote me some EVEmail a couple weeks ago and wrote a follow-up complaining that I didn't respond to the first one. The thing is, I get a lot of EVEmail. Like, a lot. Everyone wants a piece of me. I don't respond to most of my mail, but I read all or substantially all of it. 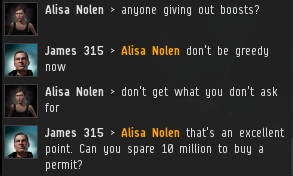 One of the reasons it's so rewarding to bump miners is that even after all this time, there's still much we can learn from them.

Though I personally retired from scamming some years ago, I respect the right of scammers to ply their trade. Scammers are some of the friendliest people you'll ever meet. 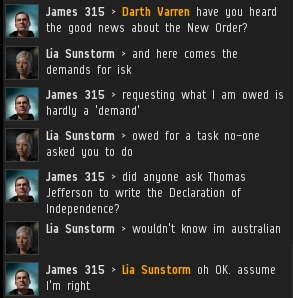 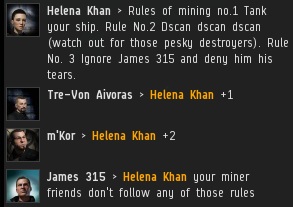 I'm not sure which of Helena Khan's three rules of mining gets violated the most. It should come as no surprise that her rules get broken so often. If miners can't even get the official rules of highsec straight, what do you expect? 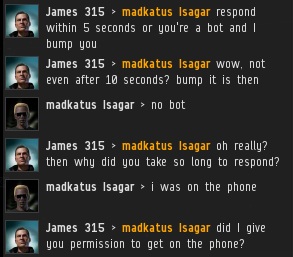 Even when I'm particularly generous with people, the enemies of the New Order will twist my words and actions to make it seem like I'm a villain. For example, a miner who goes AFK must dock up first, but if they ask an Agent, sometimes they'll be given permission to go to the bathroom. Similarly, I might grant someone leave to make use of telephonic equipment without docking up. Watch the rebels spin this thoughtful accommodation into an act of arrogance on my part! 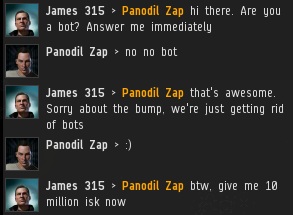 Some miners are happy to see us do battle against the bots, but they're less happy when they learn about the tax provision in the Code. The Code is not a buffet, my friend. You can't pick and choose which provisions you want to obey. The same authority that grants Agents leave to destroy bots also grants them authority to extract a mining fee. It's all or nothing!

As with any form of entertainment, EVE isn't for everyone. Our Agents help miners discover if EVE is right for them. Can you imagine the tragedy of someone mining in highsec for years on end without realizing that they don't belong in EVE?
Posted by MinerBumping at 20:07