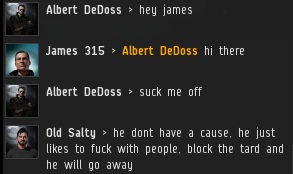 Another day in the paradise of New Eden. Nearly all of my adventures begin this way. 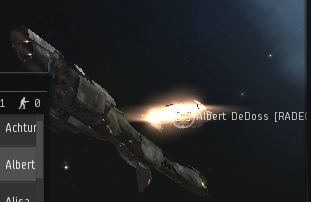 After Albert DeDoss introduced himself to me, I began bumping his Retriever out of the ice anomaly. The locals started giving him advice. 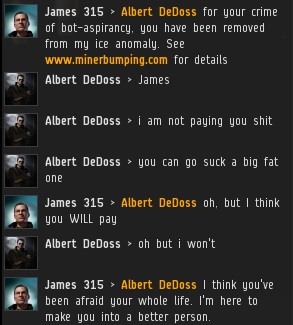 Highsec miners have a lot of hang-ups and issues that need working through. One of their biggest problems is that they're not very good communicators. They say one thing, but they mean another. For instance, if a miner says he won't pay, he really means that he won't pay until he has been bumped for a longer period of time.

Albert vowed to stop me, so I challenged him to try. If this were some cliché story, this would be the part where Albert fights back and saves the system from the evil overlord. But this isn't that kind of story. 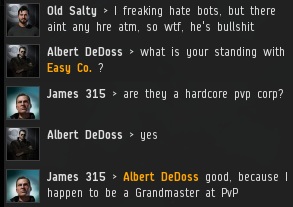 Going through the "let someone else handle this" phase, Albert suggested that his merry band of friends would stop me. It's something that carebears frequently think of. Unfortunately, there are two problems with such a plan: First, highsec mercenaries, to the extent that they exist, are all useless. Second, carebears can't actually summon them. 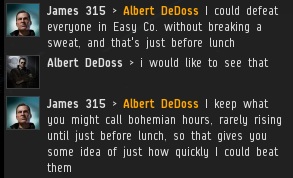 When Albert realized that I wasn't intimidated by his friends, he instantly abandoned the idea and went for plan B. 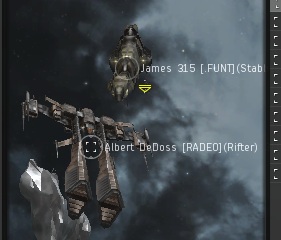 Yes, it was counter-bumping time. I sat still and let his Rifter bounce off my Invincible Stabber so I could take a picture. 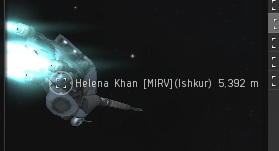 Helena Khan decided to help out, and joined the effort with her Ishkur. Like the "I have scary mercenary friends" strategy, counter-bumping has two weaknesses: First, it doesn't work. Second, it looks silly.

It began to dawn on Albert that despite chasing me around in his Rifter, he wasn't able to prevent me from bumping other miners out of the ice anomaly. His solution was to recruit more counter-bumpers from the local population. 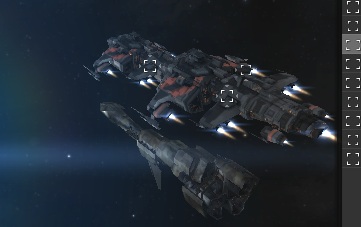 A small counter-bumping militia formed on the spot. To my delight, they sent a pair of Nighthawks after me. It's so rare that I get to see command ships used for counter-bumping. What a treat! 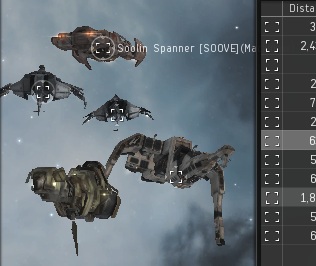 One thing I appreciate about counter-bumpers is how easy it is to photograph them. They use the "approach" command, so just sit still and wait for them to come to you. After bumping Soolin Spanner's Mackinaw out of range, I took up a position nearby. The Nighthawks were joined by a Cerberus while I posed for the camera.

Given the fact that people have tried and failed to counter-bump me for nearly a year now, it's safe to call it an act of desperation. Yet it's almost a kind of rite of passage. Before a rebel miner can learn to follow the Code, he must take a random ship and literally follow me around the ice field. How symbolic!
Posted by MinerBumping at 19:18