The sun never sets on the New Order of Highsec. Regardless of the timezone, our Agents are busy shining their light in the darkness of empire space.

Agent Lord Mandelor brought me a report from Ikao, a system nestled in The Citadel region of Caldari highsec. He previously reported on rebel activity in that system, which was infested by a rogue brony who scoffed at the Code. 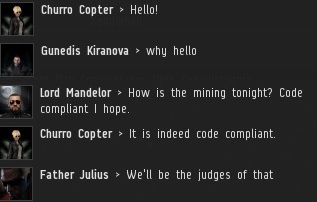 Mandelor was accompanied by Agent Father Julius, as well as Agent-aspirant Lord Kailethre, who came seeking baptism. The Ikao locals seemed in good spirits, and they assured our heroes that all was well.

But our Agents knew better than to take the miners at their word--carebears lack honour. The Agents decided to do a spot-check right then and there. They soon learned that foul deeds were afoot in Ikao.

Churro Copter was mining without a permit. When she learned that she needed to pay for mining privileges in the system, she chortled. This was a mistake. 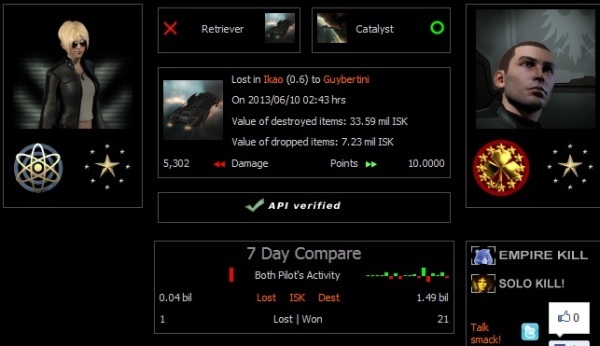 Death is the fate of all who would chortle at the Code. Out of nowhere, Knight of the Order Guybertini galloped into the asteroid belt on his suicide steed. Until that moment, he had been silent in local. No one saw it coming.

As the good guys celebrated the victory, rebel Gunedis Kiranova could only express his amazement. Until now, he hadn't taken the Order seriously. 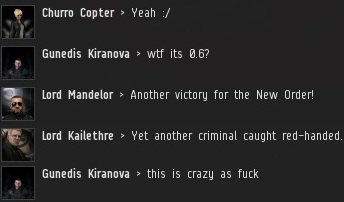 Gunedis's statements should make it crystal clear what we're fighting against: He thought it was impossible to die in a 0.6 system.

Having witnessed emergent gameplay in highsec, Gunedis vowed to sound the alarm to the rest of his corpmates.

Gunedis was infuriated that someone would dare to PvP in a 0.6 security system. He declared himself for the resistance. 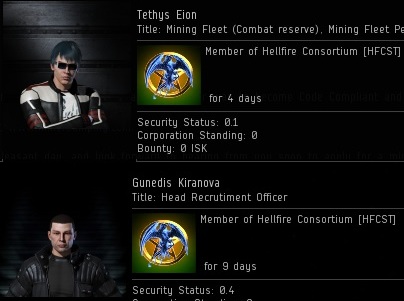 Immediately afterward, Tethys Eion entered Ikao and denounced the Saviour of Highsec. He belonged to the same corporation as Gunedis, the corp's "head recruitment officer". Had Gunedis called in reinforcements? 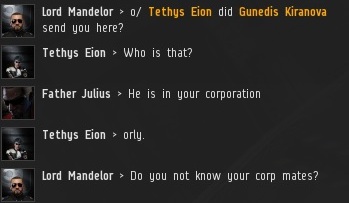 As it turned out, Tethys didn't even know Gunedis. So much for team spirit and cohesion. Just another example of highsec carebears playing EVE on single-player mode. They may join player corps, but they don't work together: They simply copy, in a very superficial way, what they see real EVE players doing. Their corps are for show. 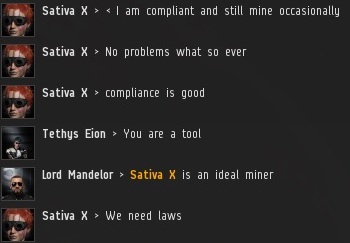 Sativa X tried to reach out to the rebels, sharing her positive experiences with Code. Did you know that we've never had a dissatisfied customer? 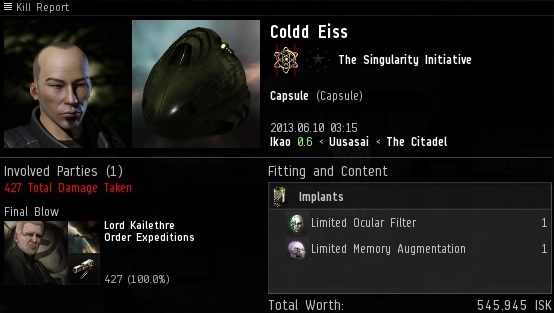 Before long, Lord Kailethre got his chance to be baptized by Concord when he podded a Code violator. I am confident this made a positive impression on the locals. I often say that our Agents are the best ambassadors we could ever hope for. Their honour, integrity, and valiant acts of courage are an inspiration to us all.
Posted by MinerBumping at 20:18