Previously, on MinerBumping... An elite task force of New Order Agents infiltrated a criminal mining enterprise called Knightrage Industries. The rebels' Orca pilot, Adam 187, was tackled by our heroes when he attempted to pass through a highsec trade route without a permit. However, a nearby gang of Anti-Gankers with logi ships kept the Orca repped up. Who would win this test of wills?

Adam's Orca pilot had already logged off. Now his alt finished berating our heroes in corp chat. He bragged about his ability to play games other than EVE while his Orca remained in jeopardy.

The Orca was still tackled, but our Agents couldn't break through the Anti-Gankers' reps. Eventually, someone else from the corp logged in. He did his duty as a carebear: He made an idle threat about having powerful siblings in nullsec, and logged out.

Later, Adam's alt logged back in to see if the battle was still ongoing. It was. He told our Agents to quit. But quitting isn't in the New Order's DNA.

Adam had missed the earlier part of the conversation, so he didn't know that his corpmate had already attempted the "powerful friends in nullsec" gambit.

It was an extraordinary situation. Hours passed, and Adam's Orca was still pinned down. Hoping to break the Anti-Ganker repair tank, our Agents requested assistance from New Order suicide gankers. But they were unable to provide sufficient DPS.

When the gankers departed, leaving only the awoxers behind, the Anti-Gankers were thrilled. The celebrated what they believed to be a stunning victory over the New Order. While Adam's Orca was still tackled, the "Highsec Militia" blog's author wrote and posted a victory report about saving the Orca:

In this moment, the difference between the New Order and its enemies could not be any clearer. We're constantly being told that what we do doesn't matter, and that we should give up. They said it from day one, when the entire New Order consisted of a solitary bumping Stabber in an ice field. They misjudged the nature of our cause, and our people. No matter what, the New Order is enduring and expanding.

The New Order never gives up. The Code always wins. 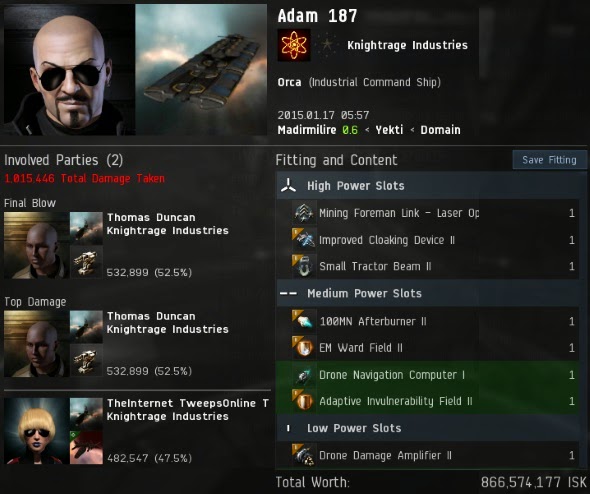 After the rebels declared victory and went home, our Agents remained behind and finished the job. Adam's Orca was destroyed. Now would Adam see the truth about the Code?

The miner's bravado vanished along with his Orca. In this vulnerable moment, the New Order awoxers had the chance to share the Code with him.


Adam 187 > when all my mates corp joins our corp
Adam 187 > ur space dust asshole
Adam 187 > so tell me what u gain from this?
TheInternet TweepsOnline TheInternet > I revealed you as a terrible CEO who is only out to scam newbies
Adam 187 > u think ur cool but u are a looser
Adam 187 > lossers like u need to prey on miner corps
Adam 187 > go play with goons or PL
Adam 187 > and be a real man lmao
Adam 187 > ur fucking pathetic

Unfortunately, Adam was stuck on the "powerful friends" Bingo Square. He invoked the names of the only two nullsec alliances he'd ever heard of, the Goons and Pandemic Legion. Even so, Adam had to admit that he wasn't going to get help from anyone else. Would he insist on threatening our Agents? And if so, how?

The carebear dropped a bombshell on our heroes: While they had been posing as normal members of the corp and participating on its TeamSpeak server, Adam had logged their IP addresses.

Despite their post-elite PvP euphoria, our Agents knew that this was a delicate situation. Adam could put aside his nonsense and embrace the Code. Or he could make real-life threats against the people who blew up his spaceship. Which path would the carebear choose?

To be continued...
Posted by MinerBumping at 21:14