The February Venture-Killing Contest is still going strong. Hundreds of these disproportionately botted mining frigates are going *POP* all over highsec. 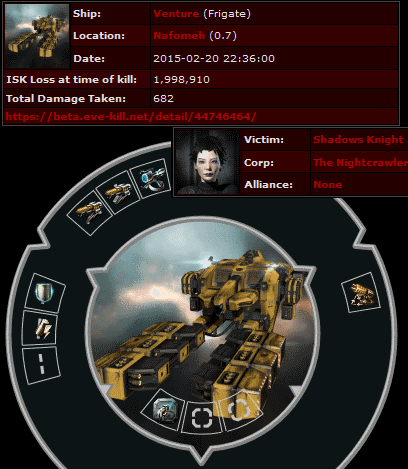 Some feel it's inappropriate to shoot a Venture, since it might be piloted by a new player. But a pilot old enough to violate the Code is also old enough to obey it. Consider Shadows Knight, who had been playing EVE for a few days before she lost her Venture.

Agent Jack Van Impe is a chivalrous, gallant Knight. When he discovered that Shadows was a new player, he sent her some money to get a new ship. He even offered to train her how to fly a gank Atron--the same ship he'd used to kill her Venture. This is classic New Order: Helpful, informative, and polite. When you put good out into the universe, you get good back.

...Unless you're dealing with a highsec carebear, that is. Shadows refused the reimbursement money and threatened to get Jack banned for committing the crime of shooting a spaceship in a spaceship-shooting game. The miner wasn't keen on the whole "violence" aspect of EVE. If only she knew about it before she pre-purchased an entire year's subscription. 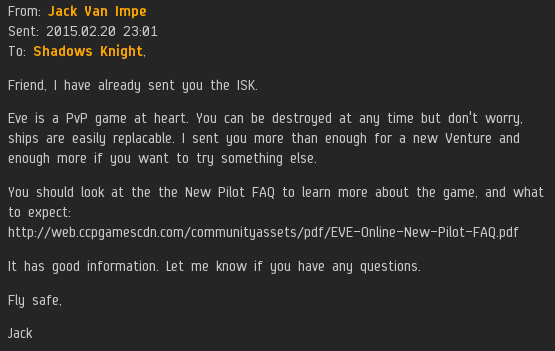 Jack wasn't intimidated by Shadows' threat to get him banned from the game. Gankers get these kinds of threats all the time. You'd be surprised how many miners truly believe it's against the rules to shoot someone in highsec. Our hero maintained his courteous demeanor and sent Shadows additional information about the game. Now that the carebear had spent some time cooling off, maybe she would appreciate it.

...Or not. Shadows claimed to have spent the last five days trying to complete the tutorial. (I know things have changed since I was a newbie, but I don't recall the tutorial being quite that long.) In addition, Shadows was going to cancel thirty accounts.

Jack kindly pointed out that the carebear was ganked while mining in a 0.7 security system. A detour from the "tutorial", perhaps? Even so, Agent Jack tried to help her understand EVE. This time, Shadows didn't reply for an additional hour. Perhaps she was really giving the matter some thought.

...No, the miner was busy complaining to CCP--probably bending their ears with stories about her thirty accounts.

Jack sent one more EVEmail, this time with detailed instructions about avoiding ganks in highsec. He concluded by telling Shadows that he would help her do something other than mining. Could Shadows Knight become a proper Knight?

...Unlikely. The newbie boasted about cancelling 32 accounts and $3,800 worth of EVE subscriptions. All because of one lost Venture. You know, that's a lot of money to invest in a game you've never played before, especially when a two-week trial is available for free. Jack didn't have the heart to tell Shadows how many Ventures she could've bought with $3,800 worth of PLEX.
Posted by MinerBumping at 01:03