As regular readers of MinerBumping know, one of the practices most consistently condemned in these pages is the use of "mining battleships". Even as far back as June 2013, the precedent was already long-established:


"I thought we had made it clear in previous editions of Kills of the Week that we don't appreciate these things mining. If you buy a battleship, you need to use it for combat. End of story."

Despite my efforts to convince them otherwise, some highsec carebears continued to abuse their battleships. 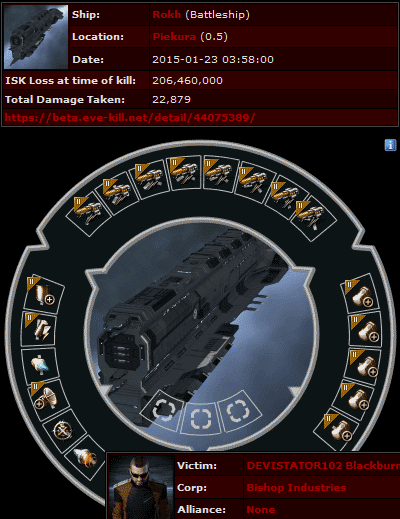 In a Kills of the Week post just a few weeks ago, DEVISTATOR102 Blackburn was called on the carpet for flying an anti-tanked mining Rokh.

Here's where things got interesting: DEVISTATOR102 was the owner of an authentic New Order mining permit. Upon being ganked, he sent a complaint to the Agent who sold him his permit. The EVEmail's subject line read, "permit fraud". How would this matter be handled? Fortune smiled upon DEVISTATOR102, for the Agent in question was none other than Gaylord Fappington of the highsec Fappingtons. Gaylord is a highly credentialed Agent with an outstanding reputation for fairness. You'd be hard-pressed to find anyone who speaks ill of Gaylord. DEVISTATOR102 was in good hands. 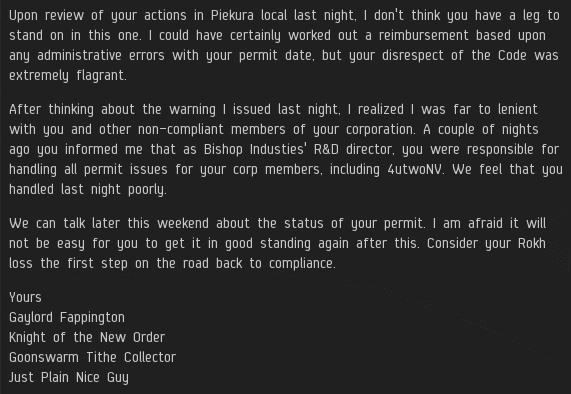 Gaylord lived up to his reputation. He quickly got in touch with the proper authorities and sized up the situation. Although there were some questions about whether the miner's permit had been misread, it soon became clear that DEVISTATOR102 had a lot of other--and more important--issues to work out. 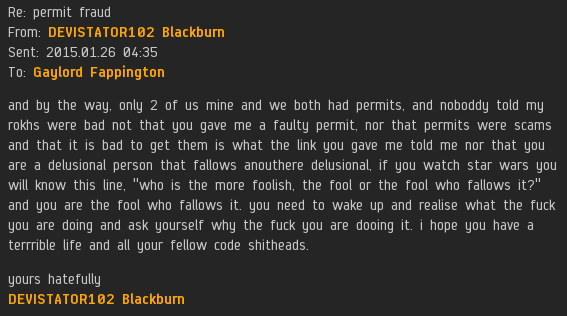 I have often said that the Code always reveals the true nature of an EVE player. On the one hand, DEVISTATOR102 didn't want to get ganked, and he wasn't bot-aspirant enough to deny that paying 10 million isk for a permit was economically rational. On the other hand, he had zero respect for the New Order, the Code, or even the Saviour of Highsec himself.

Another important point revealed by DEVISTATOR102's case: The necessity of policing miners who own permits. The New Order has radically changed the landscape of highsec. Thousands of miners own permits. But the permit is not a bribe or a "get out of Code free" card. They, too, must obey all provisions of the Code. Therefore, our Agents can't neglect Code enforcement even when it comes to those who own permits. Indeed, as the permit-owning population grows, the regulation of licensed miners will become increasingly important. 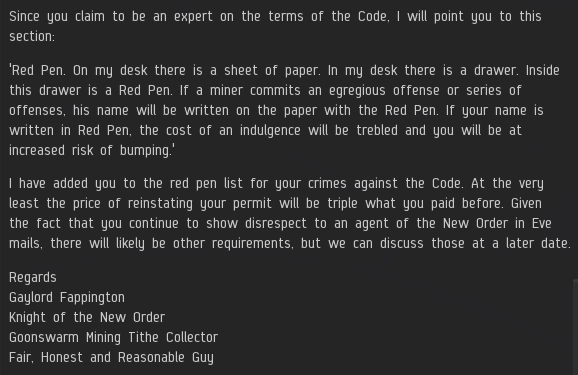 Compliance specialists like Gaylord are as professional as it gets. Those who have experience dealing with real-world governments know that highsec's New Order puts them all to shame.

Even so, not all who benefit from New Order rule fully appreciate what they've got.

Another lesson: Never ask an Agent a question that you don't want the answer to:

DEVISTATOR102 was losing it. It became clear that he really wasn't interested in obeying the Code or honouring highsec's protectors. He just wanted a bunch of free money.

Gaylord gave the wayward miner one more opportunity to make things right. DEVISTATOR102 had been shockingly rude and disobedient. He'd sounded more like a rebel miner than a Code-compliant one. Still, our heroic Agent went out of his way to assist him.

It all came down to money. DEVISTATOR102 didn't see any value in emergent gameplay generally or the history-making accomplishments of the New Order specifically. His priorities can only be described, politely, as out of whack. Granted, DEVISTATOR102 was light years beyond the miners who can't see the value in a 10 million isk mining permit. But at the end of the day, a Goofus with a permit is still a Goofus. That's permit fraud.
Posted by MinerBumping at 20:08