The Trial of Krimletch, Part 4

Previously, on MinerBumping... Krimletch was put on trial. He was found to be a bot-aspirant miner, and therefore obsolete. Because he'd been so rude to our Agents during the trial, he was also placed on the Red Pen list. This meant the miner owed 30 million isk for a mining permit instead of the usual 10 million. He paid 10 million and sent in an appeal. 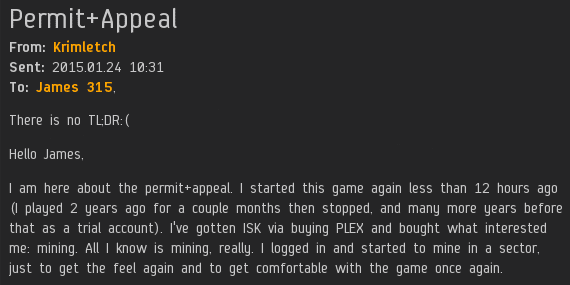 The disrespectful miner's ego had been taken down a few notches since the convo. He wrote the single longest tearmail I have ever read.

And friend, I've read a few.

Like all angry miners, Krimletch claimed that he wasn't angry. If it weren't for killboards, the ganked miners would also claim that they had never been ganked. (See, for example, any message board or comment section where a miner can post anonymously. They hate the New Order and its gankers, but insist they've never been ganked.)

Uh oh. Krimletch's "appeal" went bad in a hurry. He admitted that he was rude to our Agents, but said he only did it to test them.

According to Krimletch, he was really a nice, polite miner who was only pretending to be a Goofus to see how people would react. Apparently everyone flunked his test, because instead of apologizing for his own behavior, he started complaining about everyone else's.

The miner, who was supposed to be giving me reasons why he should be excused from the Red Pen list, went into a lecture about how the Code should be changed.

Unfortunately for the miner, he is not the Saviour of Highsec. The Code was not his to write. Also unfortunate for Krimletch: I had the entire chatlog of his convo with our Agents. His allegations about their rudeness were unfounded.

Krimletch went on and on in this manner, blaming Agents for not treating him respectfully enough when he pretended to be rude.

As Krimletch's lecture continued, he even complained about the word "guilty" being used "so loosely" in the convo. Well, that's the risk you run when you're a guilty miner. 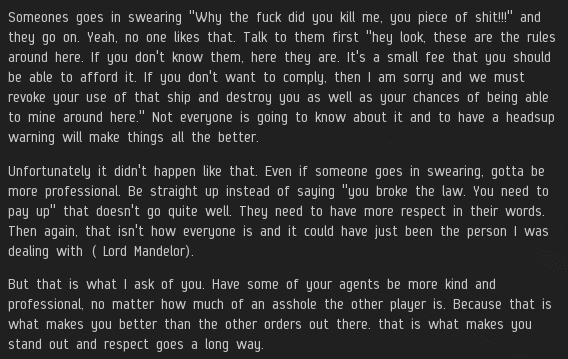 Yep, still going. At this point in the essay, you might be wondering how long it took Krimletch to write all of this stuff. The answer: Not as long as you'd think. Comparing the timestamps of the EVEmail and the convo, it actually took Krimletch less than an hour to put all this together.

In retrospect, that time wasn't very well spent. And no, it's still not over. 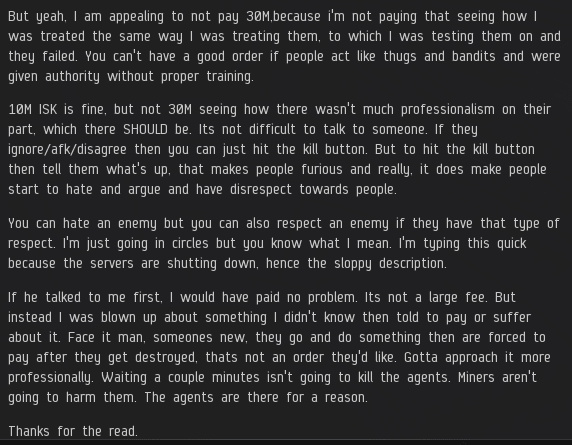 ...Now it's over. In all, the essay was over 1,500 words. Remember, it took less than an hour for him to write it. As he reached the conclusion, he said he was hurrying because downtime was approaching. Considering all the effort he put into this, should Krimletch be let off the hook? I had a decision to make.

A few days later, while I was still considering the Krimletch matter, the miner returned to the asteroid belts. This was a bad idea, especially since he still owed 20 million more isk, pending the outcome of his appeal. He was ganked by Agent Guybertini. Of course, Krimletch played the victim.

On occasion, deciding the fate of the miners is easy. Despite the fact that I hadn't yet responded to Krimletch's titanic EVEmail, the miner told Agent Lord Mandelor that I "lifted" the penalty. His story was an unlikely one--who ever heard of a mining permit costing 15 million isk?

Krimletch was also asked about his bio, which made no mention of a mining permit. Then came another whopper: Krimletch said that I was no longer requiring miners to put permits in their bio. At Krimletch's suggestion.

Then the brash miner warned of dreadful consequences for the New Order, since miners can easily hire "protection agencies".

Still wondering about the outcome of the miner's appeal? Let's just say I have a feeling ol' Krimletch is going to remain on the Red Pen list for a long time.
Posted by MinerBumping at 18:48