The Trial of Krimletch, Part 3

Previously, on MinerBumping... Krimletch was given the punishment he deserved for illegal mining in highsec. He dismissed his obligations under the Code, preferring to repeatedly call our Agents "peasants" instead. His informal chat with two Agents expanded into a full-blown trial. 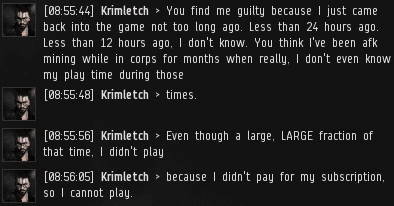 Eventually, Krimletch realized he was on trial. It was probably all the intense questioning by the Agents in the convo that clued him in. 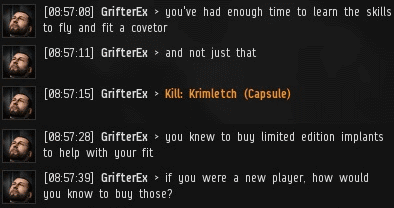 The miner tied himself in knots. First he claimed to be a new player, despite having an EVE account for two years. Then he said he was kicked out of his corp for not playing, but denied having AFK tendencies. Now he had to explain his possession of implants. 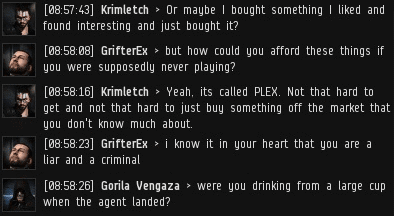 Krimletch said that he used PLEX to buy whatever items he thought were "interesting"--even if he didn't understand the nature of said items. Classic RMT behavior. Krimletch looked incredibly guilty.

Krimletch railed against in the injustice of it all. He was a misunderstood miner, mistreated by the system. 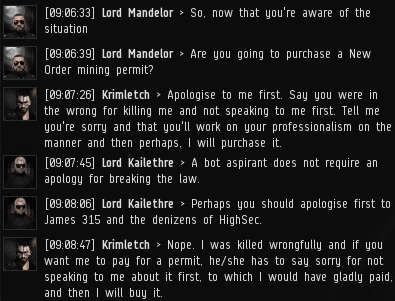 In his passion, Krimletch refused a fair plea bargain. He demanded an apology from the gankers. Since the panel of judges consisted entirely of suicide gankers, this didn't go over very well. Nor did the "I would have paid" line. 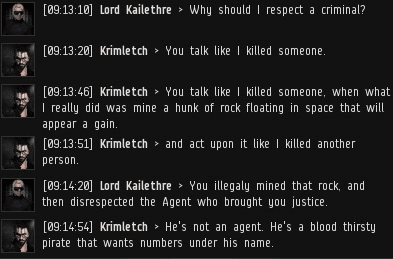 Still intent on putting the system on trial, Krimletch cast aspersions on the noble Knight who had ganked him so righteously. Not that there's anything wrong with being a pirate. This is EVE, after all. 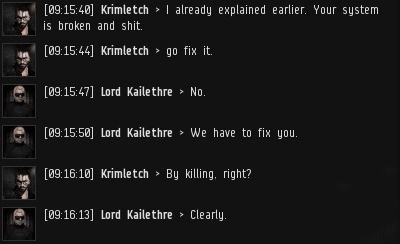 The Agents who presided over the trial looked upon the unruly miner and shook their heads. His conduct in the courtroom was enough to condemn him. 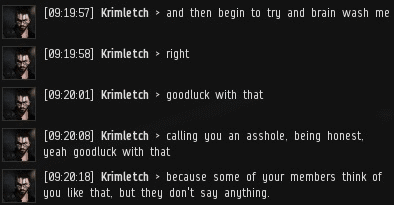 At last, Krimletch finished his soliloquy about the New Order's cruelty and injustice. No one applauded, though. The speech probably would've gotten a warmer reception in the Anti-Ganking channel; this just wasn't the appropriate venue for it.

Despite the insults, our Agents maintained their objectivity. They considered the case carefully and weighed the evidence. Krimletch was clearly a bot-aspirant, a miner whose sole objective was to mindlessly grind isk in 100% safety. Our Agents determined that the Code had made such a playstyle obsolete in modern highsec. Obsolete! 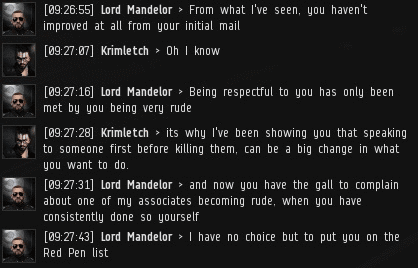 Krimletch's energy was spent. His oration against the Code had exhausted him, physically and emotionally. He admitted that he had been rude. 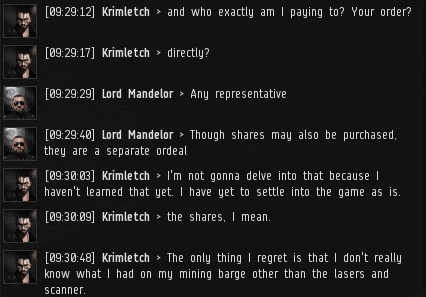 Now the miner, like so many others before him, went back on his promise never to pay for a mining permit. He meekly requested instructions for making his payment.

Unfortunately, his bad behavior during the course of the trial had gotten him into more serious trouble. Now he owed 30 million isk. 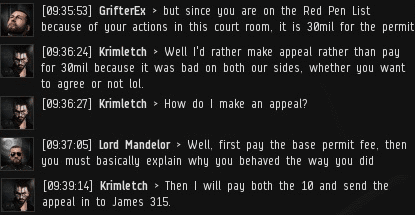 Parsimonious to the very last, Krimletch chose to pay 10 million isk and await the outcome of an appeal--rather than paying the full 30 million so he could go back to mining immediately.

And so it was that Krimletch wrote his request to be excused from the Red Pen fee. The EVEmail turned out to be the longest such mail ever written to highsec's ruler. Yes, even longer than toad trotter's epic masterpiece. But would it be persuasive? Or would it be a bunch of self-pitying, unrepentant nonsense?

To be continued...
Posted by MinerBumping at 19:12